CU, "Muenchen Dachau" sign. MS, statue with sparse trees and a train car behind it. Soldiers look into the death train discovered by American troops on April 29, 1945. The train consisted of 30 rail cars with nearly 5,000 prisoners who had been evacuated from Buchenwald in the last days of the war. Soldiers guard the length of the train, a group smokes cigarettes. Open car reveals a pile of corpses in camp uniforms. The camera pans inside the car, revealing emaciated corpses. One is naked, some are wrapped in blankets and camp uniforms. Another car with more corpses inside; one naked laying face down and the rest in camp uniforms piled on top of one another. Another car filled with corpses in work uniforms with boots on, some hanging over the side of the car. 01:13:19 Entrance gate to Dachau. Pan of the camp through the barbed wire where many survivors in long coats walk about. Quick shot of two civilian men with bikes peering through the fence. Inside the camp there are many men in long coats and hats and armbands huddled together. A group of survivors march away from the camera in the middle of the crowd, passing an Army van with three men, and an orchestra holding and playing instruments. It is lightly snowing as the camera pans the crowd. Another MS of crowd, many coats are marked with an X or KL. 01:14:05 CU, pile of naked corpses in a dark room. EXT, large mound of naked corpses piled behind the crematorium. Clothes hang near the entrance to the crematorium. Pan, brick building, troops walk in and out of the building. 01:14:53 Bodies of SS men submerged in the moat. MS, bodies of SS removed from the water laying on the ground next to each other. 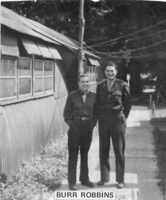 Biography
Major Sydney L. Burr of New York City, NY was stationed northeast of London in Suffolk, England at Knettishall Air Force Base from 1943 to 1945. He served with the 388th Bombardment Group of the 8th Air Force. His formal function was to debrief bombing missions over Germany. It is unclear how he made his way to Germany to film the liberation of Dachau, but since he was very close to those soldiers and celebrated their returns from successful missions, it is likely they slipped him on board one of their flights after VE-Day.

In May 1945, the 388th flew into Austria and flew French POWs back to France (otherwise they would have had to walk). They also flew ground support troops of the 388th around Europe for an aerial tour; Major Burr was a passenger on one of these flights. See http://www.388bg.info/servlet/Controller?pageType=detail&id=388-I-BUR18-01&dataType=Person.

Man drives Army vehicle up into an airplane. MS, soldier. Airplane. Soldier kneeling on the ground folding a map. Pan of massive postwar destruction in Nuremberg(?). Buildings are piles of rubble, houses have been burnt and destroyed. Soldiers walk amongst the destruction. Frames of buildings stand. MS, church with half-walls, piles of debris from bombs inside. Smoke rising in the distance. LAS reveals the battered skyline of Nuremberg(?); roofs are torn and missing huge chunks. LS, group of soldiers march in formation into the town square. Tanks amidst the debris. 01:02:26 Very unclear, grainy (ferrotyping of film) shots of destroyed buildings, soldiers standing together, ceremoniously raising a flagpole and a flag. Better quality footage of the flag raising ceremony with U.S. military tanks and soldiers. Raising the American flag on a flagpole in front of a church. Troops march out together. Military orchestra. Street scenes of Nuremberg(?), civilians meandering around the rubble and building ruins.

Aerial views of a German city, probably Stuttgart, along the river with collapsed bridges and bomb sites. Pan of the twisted metal of bombed rail cars and railroad tracks. VAR shots of massive destruction and rubble. 01:09:30 CU, "Photographieren Verboten!" sign. Soldier talks to a woman on a bike, gesturing and trying to show her something on a piece of paper. Piles of rubble on street. 01:09:53 Two young boys (orphans?) in oversized coats and boots look up at the camera. Three walls of a warehouse barely stand amidst the rubble and debris. Some buildings in BG remained untouched and undamaged, in stark contrast to the wreckage. 01:10:51 Fog, shots from inside a vehicle crossing a bridge over the river, rafts. Skeleton of an airplane hanger. Soldiers stand by a sign, "You Are Crossing the Beautiful Blue Danube Thru Courtesy of the 12th Armored Division." Views of the Danube river, soldiers on a bridge.

Pan of desolate grounds and destruction of buildings at an airfield in Stuttgart(?). A small aircraft flies in the sky. Remnants of demolished German airplanes and their skeletons on the ground. Street scenes, a civilian with a briefcase walks towards the camera. Pan of bomb destruction. Camera focuses on "The Churchill Machine Tool CO LTD Manchester England" engraving. Piles of debris on the ground. Extensive damage, ruins. 01:18:52 CU of U.S. Army jeep. An officer with a mustache talks to someone off camera while standing next to the vehicle holding the steering wheel. He and another officer lean and sit on the jeep while they converse and laugh with each other and adjust their uniforms. VAR shots of the officers. One pours wine into glasses for the both of them which they drink. An airplane flies in the sky. Soldiers working on a plane at airfield.