Panoramic view of Riga's Old Town from Kipsala Island, including a view of Dome Cathedral, Church of Jekaba, Church of Maria Magdalena, Anglican Church, and Polish Church of the St. Mary. Daugava River with boats. Jews (mostly men) with Star of David patches on the back of their coats getting onto a boat (possibly finished with a day of labor on Kipsala Island?). Various shots of the boat with several dozen Jews, some with satchels. An overloaded boat leaves the dock. 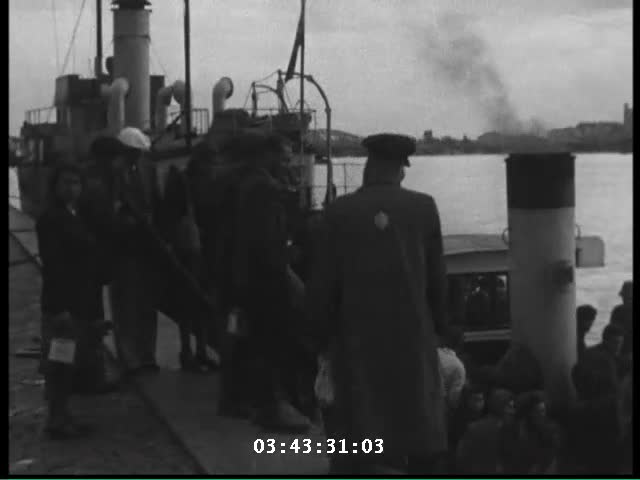 Legal Status
Permanent Collection
Film Provenance
The United States Holocaust Memorial Museum received a videocassette from the Haus des Dokumentarfilms, Europaeisches Medienforum Stuttgart in January 2009. It is from a private collection at the Haus des Dokumentarfilms.
Note
This clip is followed by fifteen seconds of unrelated footage showing a man digging in the rubble (war damage?) and aerial views.

A Jewish labor camp was on Kipsala Island during World War II. It was also home to the residence of Zanis Lipke, a righteous gentile who hid 55 Jews in a chicken coop during the Nazi occupation.
Film Source
Haus des Dokumentarfilms
File Number
Legacy Database File: 5130
Source Archive Number: 880.221