In the Jewish quarter, a tracking LS follows a boy with a cocked hat who makes an effort to stay on camera. Dark silhouetted interior (of a restaurant, probably Owsianka), faces cannot be deciphered. Bright exterior CU of group of children in the street. Excited to be on camera, they wave and move together as the camera rotates. 01:03:06 Fourteen year old Maurice Chandler [nee Moszek Tuchendler] wearing a dark cap. Sign indicating "Spozywczy", a grocery storefront. Several shots of crowded streets. Many exit the synagogue together, walking down the set of stairs. 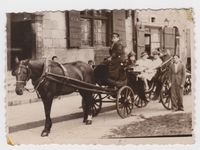 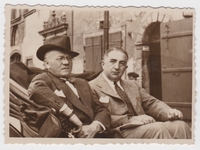 Biography
David and Lena (Liza) Kurtz travelled to Europe from New York in 1938. Both were born in Poland and emigrated to the U.S. in the 1890s. David founded the American Blouse Company in the 1920s, later named the David Kurtz Shirt Company. The couple had three children. While abroad in 1938, David took 16mm film of the trip, including color street scenes of a Jewish quarter in Nasielsk, Poland (David and Louis's hometown). The trip was made with three friends, Louis and Lillian Malina, and Louis's sister, Essie Malina Diamond, who appear frequently on camera. David died in 1958; Liza lived to the age of 96.

Maurice Chandler was born Moszek Tuchendler in 1924 in Nasielsk, Poland. The middle of three sons of Chawa and Szaja Tuchendler, he was the grandson of Srul Skalka, a prominent merchant in the town. His education at Cheder and at a Jewish trade school in Warsaw was interrupted in 1939 by the German invasion of Poland. After first fleeing to the Soviet-occupied territories, he returned to Warsaw in late 1939 and remained in the Ghetto with his family until he escaped in the spring of 1941. He survived the war posing as an orphaned farmhand, using false papers provided by Helena Jagodzinska, the Polish owner of a farm where he had worked. The sole survivor of his family, Mr. Chandler came to the United States on a student visa in 1947. He served in the U.S. Army during the Korean War and afterward settled in Detroit, Michigan, where he became a successful businessman. The father of four children and numerous grandchildren and great-grandchildren, Mr. Chandler is the subject of the 2014 book, Three Minutes in Poland (Farrar, Straus and Giroux), which describes his chance appearance in a 1938 home movie and the story of his wartime survival.

Legal Status
Permanent Collection
Film Provenance
Glenn Kurtz, the grandson of cameraman David Kurtz, donated his family's original 16mm film to the United States Holocaust Memorial Museum in May 2009. The films were stored in a cardboard box in the closet of Mr. Kurtz's parents in Florida until spring 2009.
Note
Read the 2014 book "Three Minutes in Poland" about this extraordinary home movie. Watch a special video the Museum produced after Maurice Chandler's granddaughter identified him in this film footage at http://m.youtube.com/watch?v=V9PzAlbvA08

Title card reading: "Our Trip To Holland, Belgium, Poland, Switzerland, France and England 1938". Liza Kurtz, Louis and Lillian Malina, and Essie Diamond on deck of Nieuw Amsterdam ship at sea. Napping and relaxing on deck. Lillian reads the NYTimes magazine dated July 24 about Henry Ford receiving a birthday award from Hitler. The ship departed the port in Hoboken, NJ at 12:40pm on Saturday July 23, 1938. HAS, crowds of people on board a ferry in Boulogne, France or Amsterdam, Netherlands, some waving. The Nieuw Amsterdam stopped first in Plymouth, England on July 30, then in Boulogne, and finally in Amsterdam on July 31.

LS of the four American travelers posing beside a tree in front of an unidentified building, probably in Amsterdam on July 31 or August 1, 1938. Louis Malina is smoking and waving to the camera. Street life in Volendam, Netherlands. Volendam is a popular tourist attraction in the Netherlands, well known for its old fishing boats and the traditional clothing still worn by some residents. The women's costume of Volendam, with its high, pointed bonnet, is one of the most recognizable of the Dutch traditional costumes. Pan views of boats docked in the Volendam harbor. People and children, some in traditional dress with paper hats, often look toward the camera and pose.

The four friends pose in a doorway at Grand Hotel National in Lucerne, numbered 4 Haldenstrassen. At a pier from which they would take a ferry across Lake Lucerne, views of the mountains.

Kurtz family and friends on European tour in the south of France, Paris, and Switzerland

MS of Liza Kurtz, Louis and Lillian Malina and Essie Diamond smiling for the camera and admiring the landscape from Parc Municipal du Mt. Boron in Southern France in mid August 1938. Panning shot of city and harbor of Nice and distant mountains. 01:05:12 Over shoulder shot of Louis in a sunhat pointing toward the old city of Monaco from the Jardins Exotique. 01:05:19 Street scenes in a city, possibly Cannes. Louis in a suit, and African soldier with a red hat. 01:05:27 LS of Liza, Louis, Lily, and Essie feeding birds in Paris in front of the Préfecture de Police and the Hôtel-Dieu, most likely on August 19. The American friends board a train at a station. 01:05:48 MS elderly woman making what appear to be lace doilies for sale on street. Liza holds a box camera in her hand. 01:06:00 Traveling shots of the Swiss Alps, countryside, and villages from a train. The friends are on a small gauge railroad to see Lautenbach-Staubbach Falls, and later visit the towns of Muerren and Wengen. MS, smoke rising from the Hotel Regina in Wengen. ELS of hotel bearing the words, "Hotel Jungfrau." Panorama of the Alps between Jungfrau and Eiger. 01:07:22 Liza, Louis, Lillian, and Essie tour the city of Geneva and visit the League of Nations headquarters, sometime in mid-August.

Interiors of Queen Mary ship at sea, the four American friends walking down a brightly lit corridor with clock reading 7:03 AM on September 5, 1938. David Kurtz in a gray suit and short, red, wide-bottomed tie. Window reflection with the three women smiling. Extreme LS of distant Statue of Liberty viewed from the S.S. Queen Mary. Pan across New York City skyline from north to south. Various posed shots of Essie, Louis, Lillian, Liza, and David aboard ship. David holds the camera case under his arm. HAS of people on deck greeting the ship's passengers, including David and Liza's three children, Jerome (b. 1919), Milton (b. 1925, Glenn's father), and Shirley (b. 1927). Jerome waves.

Girls dressed in Dutch costume in Volendam, Netherlands. Volendam is a popular tourist attraction in the Netherlands, well known for its old fishing boats and the traditional clothing still worn by some residents. The women's costume of Volendam, with its high, pointed bonnet, is one of the most recognizable of the Dutch traditional costumes. The four friends sit outside Cafe Spaander in Volendam, probably on August 1. Signpost shows where folks gather to return to "Amsterdam". CUs, women with children. The Americans walk in gardens in Brussels, most likely on August 2, 1938, dressed the same as seen at 01:10:46. 01:10:27 Louis, Lillian, Essie, and Liza pose in front of a stone statue of four bears beside ivy-covered building. This may be in Geneva, Switzerland at the League of Nations building when the visited in early or mid August (9 to 15?). 01:10:46 In Brussels on August 2, the four Americans descend stairs and walk towards the camera. Liza Kurtz smiles beautifully. They visit a cathedral, possibly in Brussels or the Hague. 01:11:00 Grand Place in Brussels - an open square and a flower market with with umbrellas.

Street scenes, dark, people gathered, automobile. Interior shots of a restaurant (probably Owsianka) in a Jewish quarter in Nasielsk, Poland, many people looking inside the window in clear view. Several wonderful street scenes of people, especially children, in the Jewish quarter grinning and vying for the camera's attention. A sign above a shop indicates a grocery, "Spozywczy". Some people have been identified, including: Shmuel Tyk and Faiga Milchberg at 01:11:25, Chaim Talmud and Shmuel Tyk at 01:11:56, Simcha Rotstein and Avrum Kubel at 01:12:04, Yitzhak Borts at 01:12:09, Srebro at 01:12:11, Chaim Nusen Cwajghaft at 01:12:24, Chezkiah and Chaim Nusen Cwajghaft at 01:12:34. Only approximately 80 of the 3,000 Jews living in Nasielsk in 1939 survived the war.

On a boat in Switzerland, views of villages, including Hotel Beaux-Rivage and Hotel "Gotthard" (sign). Seaside views of mountains.

View All 9 Items in the Collection