Liberation of Buchenwald and Dachau

01:03:26 Demonstration of the hanging and subsequent beating with a club which inmates received. Panning of a pile of bodies outside crematorium with a brief shot inside. Landscape view of Buchenwald camp and crematorium. CU of a beaten body. Pile of burned corpses, ashes, twisted metal. Lime pit for disposing of bodies, CU of a leg. Pile of ashes/bones outside crematorium. Narration says it represents approximately 70 people. CU of inmate showing bloody mouth. Narration says he's an editor from Warsaw and was hit with a rifle butt.

01:05:04 Line of local Germans from Weimar walking into the camp at Buchenwald. CUs of well-dressed locals walking, surveying camp. Women covering their mouths. Locals looking at human organs in jars on a table. CU of human organs, including half of a severed head rotated on a table. Local woman running with face covered, men and women walking. Display of tattoos on human skin. CU of several tattoos, with pencil pointing out male nipples. Lamp with shade made of human skin. Photograph of woman - narration says it is Ilse Koch, wife of the former camp commandant. CU display of two shrunken heads. Locals filing into camp, walking past pile of bodies with mouths/faces covered. Pile of corpses in the back of a truck. Locals surveying camp, starving inmates, dead bodies. Locals walking shocked through camp. CU of several men and one women, narration explains they are SS of different nationalities, and the wife of the local hangman. CU of beaten bodies/blood covering the ground. Shot of U.S. soldiers looking at bodies strewn on the ground. Several shots of different piles of bodies. CU of corpse, tattoo visible on arm. CU of two U.S. medical officers reactions.

01:10:27 Local German men filing into Dachau, looking at a large pile of corpses. CU of German men. Groups of local men pulling bodies from the pile, throwing them up onto wagons. CU of heads of corpses in the pile. Horses pulling wagons full of corpses down a road. 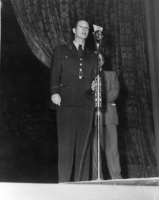 Film Title
Lest We Forget

Biography
Arthur Mainzer (1923-) was a cameraman in the 4th Combat Camera Unit of the 9th Air Force. The Combat Camera Unit was tasked with creating Air Force training films at Hal Roach Studios. After completing training at the Air Force Photo Technical School in Denver, CO and the First Motion Picture Unit in Culver, City, CA, Mainzer was deployed to Europe. He was filming bomb damage by the Allied Air Forces with Captain Ellis Carter when they heard about Buchenwald and drove there by jeep on April 13, 1945. Mainzer and Carter filmed conditions at the camp on Kodak color film stock using two handheld 16mm film cameras. The footage was then sent to headquarters in London for processing.

Norman Krasna (1909-1984) was an acclaimed Jewish American screenwriter, playwright, producer, and film director. He worked as a film and theatre critic in New York before heading to Hollywood to join Warner Bros. He served with the US Army Air Forces motion picture unit from 1943 to 1945 and returned to Los Angeles to continue his career as a freelance writer. Krasna earned several Academy Award screenwriting nominations, and won an Oscar for 1943's "Princess O'Rourke", which he proudly accepted in his Air Force uniform.

Legal Status
Permanent Collection
Film Provenance
Beth Krasna, the daughter of filmmaker Norman Krasna, donated an original 16mm kodachrome print of "Lest We Forget" to the United States Holocaust Memorial Museum in January 2010. As part of the United States Air Force Motion Picture Unit, Norman Krasna, Capt. Ellis Carter, and Lt. William Graf documented liberation of the camps on color film in April 1945. After the war, Mr. Krasna obtained the footage from an archival repository in the U.S. (possibly the National Archives and Records Administration), edited this film, and added narration. The film aired on television in March 1981 on a program sponsored by the Simon Wiesenthal Center.
Note
See stories RG-60.0001, RG-60.0003, RG-60.0135, and RG-60.2254 for similar (if not the same) color footage of the liberation of Buchenwald from NARA that is attributed to the US Army Air Force Motion Picture Unit (SFP 186).

See story RG-60.3065 for similar footage (if not the same) color footage of the liberation of Dachau from NARA that is attributed to the US Army Air Force Motion Picture Unit (342 USAF).

See donor file for a complete transcript of Norman Krasna's narration to this film, which was recorded in 1945.