Immediate postwar documentary about the Jews in Poland during World War II. In Yiddish with English subtitles. Also called "We the Survivors".

06:12:59 to 06:13:58 Footage of the first unearthing of the Ringelblum Archives on September 19, 1946 in the ruins of the Warsaw ghetto. During the war, Emanuel Ringelblum and a team of historians within the Warsaw Ghetto assembled an astonishing set of testimonies, documents, and photographs, which they preserved in buried milk cans to be unearthed after the war. Man arrives on a motorcycle at a large pile of rubble. Group of men stand at the entrance to the mound where men are uncovering two metal boxes containing the archives. CU as man opens one of the boxes filled with crumbling papers, followed by an interior shot of the five metal boxes being inspected. 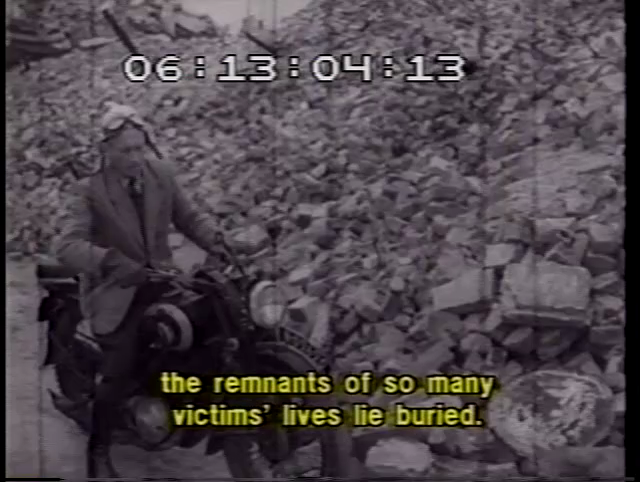 Legal Status
Permanent Collection
Film Provenance
The United States Holocaust Memorial Museum received a copy of this video from the National Center for Jewish Film for general reference in February 2010.
Note
For a sense of the variety and scope of the materials contained within the Ringelblum Archive, consult "The Warsaw Ghetto Oyneg Shabes-Ringelblum Archive: Catalog and Guide" edited by Robert Moses Shapiro and Tadeusz Epsztein (2009) or "Who Will Write Our History?" by Samuel Kassow (2007).
Film Source
National Center for Jewish Film
File Number
Legacy Database File: 5279

Copyright
Copyright. National Center for Jewish Film
Conditions on Use
Contact NCJF at pontius@brandeis.edu for permission to reproduce and use this film.
Record last modified: 2020-02-04 10:40:42
This page: https://collections.ushmm.org/search/catalog/irn1004375