Film taken by a German, possibly Propaganda Kompanie 689. Sign: "Wohngebiet der Juden! Das Betreten ist unbefugten verboten...." [Jewish residential area! No unauthorized admittance...] CU, sign with a star marking, pan down to street view. Crowds in the cold snowy streets of the Łódź ghetto. Jews walking, bundled up, with yellow stars. Children in FG. VAR shots, street scenes, snowing, children in the windows of wooden homes, Jewish homeowners, filming through a fence. CUs, children with yellow star marking "Jude," elder, baby. Walking up a stairwell. Men pushing ice in the river. People looking at the camera in a courtyard, shoveling snow, daily business, walking in the streets, transporting items in the street with a cart. Ghetto gate in BG. Men with stars on the back of their coats, some tip their hats to the camera, crossing the street. Getting water from well/pump. Pan up of vacant apartment buildings. Sweeping snow. Police force a group of Jews to march quickly in the street. Pan up, synagogue with Hebrew writing on EXT.

Hanging sequence. Guards protect the gallows with multiple nooses (sustained scene). CU, armband with Star of David. Quick cut of film leader with handwriting, followed by a view of officers and spectators gathered in a town square for the hanging. LS, men (some with armbands) are marched from a hut to the gallows; MS, their hands are tied around their backs and ropes placed around necks. One man has trouble standing, a woman stands beside him on the platform. View of a huge crowd spectators. 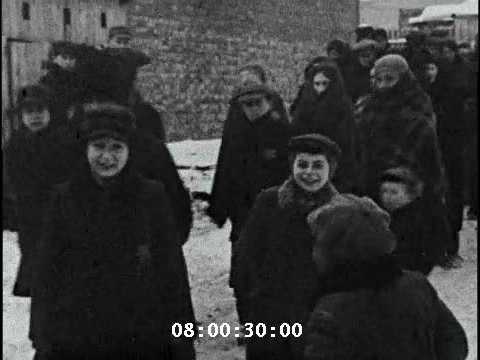 Legal Status
Permanent Collection
Film Provenance
The US Holocaust Memorial Museum jointly restored this 16mm film of the Lodz ghetto. The Museum borrowed original 16mm materials from two repositories in Israel, the Steven Spielberg Jewish Film Archive at Hebrew University, and the Jerusalem Cinematheque, in April and June 2010 with the goal of creating an improved, cleaner version of Lodz. The archival film materials consisted of one 16mm black and white safety print and one 16mm black and white dupe negative. The print contained major splice and perforation damage throughout and was not a camera original. The dupe negative, while damaged, was found to be in much better structural shape and contained more total footage than the print. Colorlab created a new 16mm print from the dupe negative by contact liquid gate, along with high quality high definition video transfers via telecine. The results are tremendous, not only for the additional scenes, but also for the impressive sharpness and quality of the image. Original elements and video copies of the newly restored 16mm film were sent to Israel in September 2010.
Note
This is the product of joint preservation project between Beit Lochamei Hagetaot, Steven Spielberg Jewish Film Archive at Hebrew University, Israeli Film Archive-Jerusalem Cinematheque, and USHMM. For more details, refer to departmental files.

The location may be Brzeziny.

Refer to SSFVA files for Bundesarchiv photo documentation which is said to be from the Lódz ghetto in 1941 of a troop of cameramen in what appears to be SS uniforms in a jeep or car filming the ghetto. In the passenger's seat one sees an officer who looks precisely like Willy Wist, who filmed the Warsaw ghetto in May 1942 (RG-60.3431).

Copyright
Copyright. Bet Lohamei Haghetaot (Ghetto Fighters' House Museum)
Conditions on Use
Contact the Archives Manager of Bet Lohamei Haghetaot at anatb@gfh.org.il for permission to reproduce and use this film.
Record last modified: 2020-08-04 09:21:52
This page: https://collections.ushmm.org/search/catalog/irn1004506