Movietone Newsreel outtakes from the Madison Square Garden pageant, "We Will Never Die". Parts with sound. There is a stage for actors and actresses to perform (as the "voices of the voiceless"), for speakers to address the crowd, and for the orchestra and chorus to perform. The audience interacts by raising its arms in a gesture honoring the victims. Opens with a semi-circle of flag-bearers. Most of the flags are indistinguishable, but the American flag comes forward to the center. Quick WS of the stage with the chorus, then several shots of the huge audience. Actors and actresses dressed as European Jews of various raise their arms toward the Star of David which hangs over the center of the stage. As candles are lit in the dark, a man reads a list of Jews who have received the Nobel Prize, citing great Jewish contributions to humanity. The stage performance continues (in short cuts). A man speaks into a microphone: "These are the two million Jewish dead of Europe today. They will have no one to speak for them at the Table of Judgement, no voice but ours to echo their cry of 'Remember us'. Of the six million Jews in German-held lands, the Germans have said, 'None shall remain.' The four million left to kill are being killed, according to plan. When the time comes to make the peace, they will have been done to death." More fragments: reading of Nobel Prize recipients, speeches, etc. At one point, the Battle Hymn of the Republic is sung. More speeches are given, including a letter from Thomas Dewey, the governor of New York. The national anthem is sung, possibly in closing. Quick MCUs of speakers in front of microphone. 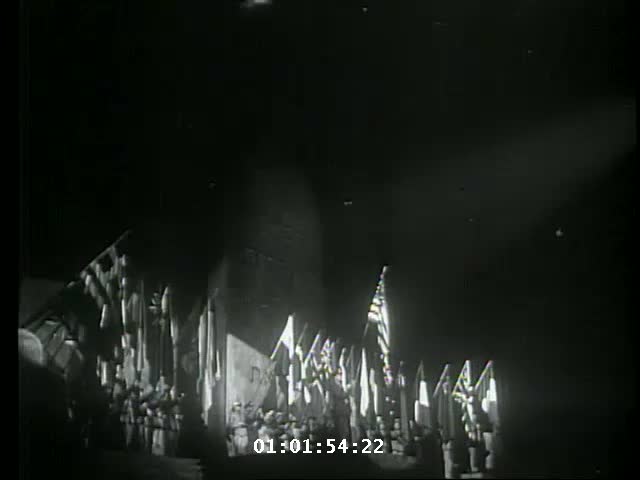