Amateur footage taken by an American Jew, Joseph Shapiro, during a visit to relatives in Horodok, a Polish shtetl ocated between Minsk and Vilna. American travelers dressed in expensive clothes shake hands with villagers. The camera pans the landscape showing horse-drawn wagons, farms, trains resting on tracks, and local businesses (beer house "Piwiarnia"). 14:16:52 Children present flowers to visitors. A large procession of children (some in gymnasium hats) walk in pairs, as teachers organize the group. 14:18:56 The children rush towards a bus labeled "98 Iwieniec..." traveling from a town located in current-day Belarus. The procession tours the farms and a stops at a graveyard amongst the trees. Men share prayer books, as a villager in a dark suit recites a prayer. 14:19:37 The group mourns and prays. Men, women, and children pose in front of businesses, schools, and homes. People smile for the camera. An old couple greets the younger generations. 14:27:49 Young men and women hold hands and circle around the old couple. 14:30:14 Adults distribute bagels and milk to children at an outdoor celebration. Children line up and pose for the camera in front of a large wooden school or synagogue. The camera captures a crowded market, daily work, buildings and signs, and livestock. 14:37:20 An unusual shot shows a soldier in military garb directing the children and walking with his bicycle at his side. The visitors share hugs and kisses with an elderly village woman. The group laughs and jokes, as the elderly woman slaps away their kisses. The camera captures scenes aboard a large ocean cruiser called "Hamburg Amerika Linie." The travelers pose with the crew and play games aboard the ship. The travelers laugh and talk, as they capture scenes of the landscape from a train. The visitors stroll open boulevards in Germany and visit the zoo. The camera cuts to a green landscape with flowers, wooden houses, and farm animals. One visitor poses with a new car parked on the grass. 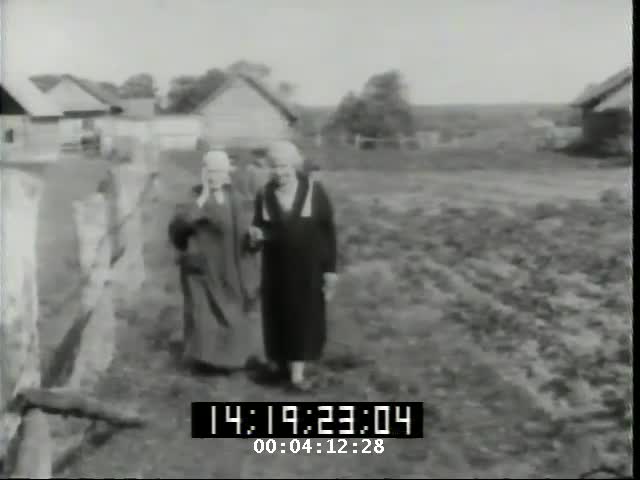 Legal Status
Permanent Collection
Film Provenance
The United States Holocaust Memorial Museum received a copy of this video from the National Center for Jewish Film for general reference in May 2011.
Note
Transfer from two reels of original 16mm film.

Copyright
Copyright. National Center for Jewish Film
Conditions on Use
Contact NCJF at pontius@brandeis.edu for permission to reproduce and use this film.
Record last modified: 2020-02-04 10:39:08
This page: https://collections.ushmm.org/search/catalog/irn1004642