Two soldiers pose for the camera with their heads stuck out of holes in a military-issued tent. A third man pours water on them. In FG, automobile. Panning the campsite. CU of the Edelweiss insignia, indicating that these are troops of the 1st Mountain Division of the Army South. 00:00:47 Mass at the campsite with crowd of seated German soldiers. They pray and accept Eucharist. 00:01:12 Pan of the landscape and surrounding woods. Watch tower. Deep tire tracks in the mud. 00:01:34 Two soldiers survey with binoculars. Soldiers in tall grass with rifles. 00:02:00 Armored tank. CU bullet holes in a radio. 00:02:17 Ukrainian civilians pose briefly near military car. 00:02:27 Landscape and smoke in distance. Bird nesting on roof. 00:02:44 Scenes of battle destruction from van, body face-down by road, belongings scattered. 00:02:56 CUs of a group of soldiers and displaced men with bicycles walking by road. Another body by tank. 00:03:05 Soldiers gather at campsite. Men carry an empty stretcher. Soldiers patrol area, vehicles driving on road. CU soldier. Another digs a grave. 00:03:42 Troops in vans/tanks drive into town. End of reel. 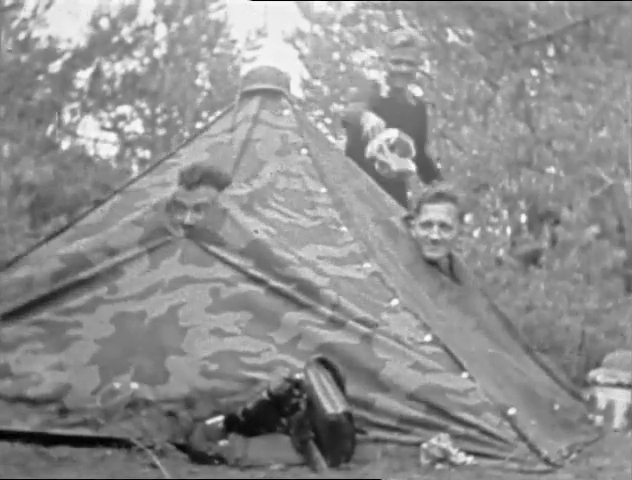 Legal Status
Permanent Collection
Film Provenance
The United States Holocaust Memorial Museum received a DVD copy of this film from scholar John-Paul Himka. The film was discovered at the Ukrainian Canadian Research and Documentation Centre (UCRDC) in Toronto, Canada by a researcher working on the topic of the Waffen-SS Division Galizien. The film was originally donated to the UCRDC by a Ukrainian community activist. The UCRDC has since stated that the film cannot be located in their archive.
Note
Movement of the German Army South on the Eastern Front in 1941 filmed with a handheld camera. From the flower insignia on some of the vehicles, the scenes seem to focus on units of the 1.Gebirgs-Division or 1st Alpine Division, which was in Lemberg/Lvov (then Vinnitsa and Uman) with Army Group South, as of June 1941. It was probably part of XXXIX.Gebirgs-Armeecorps or 49th Mountain Army Corps. The Army South's mission was to capture Kiev, the capital of the Ukraine, and to drive out Soviet troops in advance of the Army North and Army Center's invasion into Eastern Europe and Russia.
Copied From
16mm
Film Source
John-Paul Himka
File Number
Legacy Database File: 5630

Copyright
Unknown. Copyright Owner is Undetermined
Conditions on Use
Owner of copyright, if any, is undetermined. It is the responsibility of anyone interested in reproducing, broadcasting, or publishing content to determine copyright holder and secure permission, or perform a diligent Fair Use analysis.
Record last modified: 2020-02-04 10:39:09
This page: https://collections.ushmm.org/search/catalog/irn1004687