Tank leaves tire tracks in field. Brief shot of a caravan of vehicles on road, poles torn down, and tank overturned. LS, farm and fields. 00:04:34 Dark shots of troops marching along city road, silhouette of a gate and a village. A soldier knocks down the star from the gate. CU fallen star. 00:04:53 Troops march towards camera. Troops march into Lemberg. Good shots of civilians watching and cheering. The crowd parts for a military car (with camera on dashboard). 00:05:38 Various shots of the city of Lemberg, homes and buildings. 00:06:31 CU of a German officer smoking and talking to soldiers. 00:06:31 A woman hangs a public announcement poster. 00:06:38 Civilians decorate military cars with flowers. Dark shots of soldiers marching through Lemberg on cobbled streets.

00:07:11 Jews are marched through streets lined with a crowd of civilian spectators mainly on ul. Kopernika (today vul. Kopernyka). The Jews were rounded up on the streets and forced into the NKVD prison to exhume the bodies of "victims of Stalinist persecution." Violence breaks out and the civilians attack Jewish men and women. Bloodied men run away as thousands of viewers watch and German troops observe the attack.

00:07:56 Decomposing bodies of Jewish victims and prisoners executed by the NKVD before the retreat of the Soviet army are lined up on street. Civilians cover their noses and search among bodies. 00:08:32 CU of a victim's bound hands. 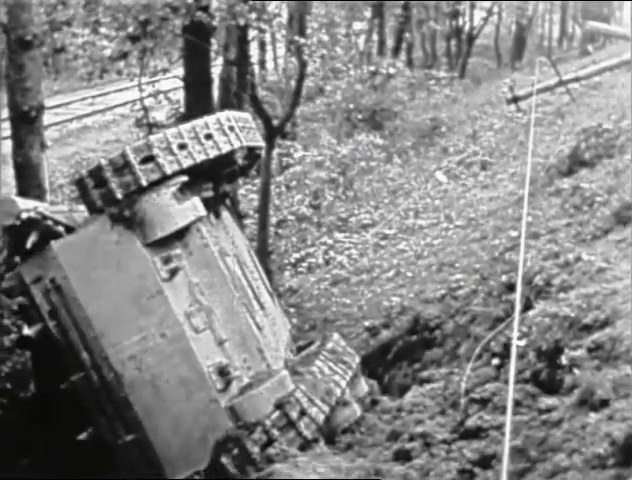 Legal Status
Permanent Collection
Film Provenance
The United States Holocaust Memorial Museum received a DVD copy of this film from scholar John-Paul Himka. The film was discovered at the Ukrainian Canadian Research and Documentation Centre (UCRDC) in Toronto, Canada by a researcher working on the topic of the Waffen-SS Division Galizien. The film was originally donated to the UCRDC by a Ukrainian community activist. The UCRDC has since stated that the film cannot be located in their archive.
Note
For a photo from the same site, but not from the film, see USHMM Photo Archives W/S 49191.
On June 30th, 1941, German troops entered Lemberg. The city had recently suffered from the mass executions of Ukrainian nationalists and political prisoners committed by the NKVD (Soviet Secret Police) before their hasty retreat into Russia. As civilians celebrated the Soviet withdrawal and welcomed the new military presence, German troops uncovered the remains of over 4,000 victims. Aided by German troops, who instigated the belief that the Jews of Lemberg were responsible for the deaths, civilians began a pogrom against local Jews, which lasted four days and resulted in over 4,000 deaths. Another 7,000 Jews and 73 NKVD affiliates were later rounded up and executed. The remaining Jews were forced into the city's ghetto and were eventually deported to Belzec and Janowska.

Movement of the German Army South on the Eastern Front in 1941 filmed with a handheld camera. From the flower insignia on some of the vehicles, the scenes seem to focus on units of the 1.Gebirgs-Division or 1st Alpine Division, which was in Lemberg/Lvov (then Vinnitsa and Uman) with Army Group South, as of June 1941. It was probably part of XXXIX.Gebirgs-Armeecorps or 49th Mountain Army Corps. The Army South's mission was to capture Kiev, the capital of the Ukraine, and to drive out Soviet troops in advance of the Army North and Army Center's invasion into Eastern Europe and Russia.
Film Source
John-Paul Himka
File Number
Legacy Database File: 5631

Copyright
Copyright. Copyright Owner is Undetermined
Conditions on Use
Owner of copyright, if any, is undetermined. It is the responsibility of anyone interested in reproducing, broadcasting, or publishing content to determine copyright holder and secure permission, or perform a diligent Fair Use analysis.
Record last modified: 2020-08-04 09:20:07
This page: https://collections.ushmm.org/search/catalog/irn1004688