17:13 The clerk continues reading the deposition of witness Jacqueline Modier, née Rozenfarb; the witness lived in Paris until the Vel d'Hiv raid, when she moved with her family to Lyon; her father was deported to Auschwitz and died there; the witness was present at the UGIF raid, where she unknowingly entered a room and was greeted by a uniformed soldier; the witness recounts the proceedings of the raid; after 9 pm, the witness was released because she had falsified French papers and was younger than 15

17:19 The Attorney General presents two medical certificates pertaining to the next witness, Chana Grinspan, née Frenkiel, who is unable to appear in court due to ill health

17:20 The clerk reads Mrs. Grinspan's deposition; the witness was born in Poland as was her husband; they met in Paris and were married in 1941; her husband was arrested in 1942 in the Vel D'Hiv raid for being Jewish; she was not arrested because she had an infant child; her husband was sent from the Vel D'Hiv to Drancy and then to Auschwitz; Mrs. Grinspan subsequently traveled to Lyon with her son, which was still in the free zone; she was at the UGIF on the day of the raid in February 1943, with her son who at that time was 8 months old; she entered the UGIF unaware that the raid was underway, and was arrested in the doorway; she pretended not to understand German, the language in which she was addressed, and another woman who had been arrested was made to translate for her; more than 100 people had been stopped and were made to stay inside one room of the UGIF; she recalls one elderly man who arrived with his grandson and whom a German soldier beat; she was let go at about 5:00 pm because her baby was crying so loudly; she cannot recall whether she saw Barbie at the UGIF on that day

17:30 A civil party, Elie Nahmias, presents himself as a witness; Mr. Nahmias was a university student who, in 1944, was asked to serve for the Red Cross, along with many fellow students; in July 1944, he was asked to deliver a message in another part of Lyon on behalf of the Red Cross, and when he exited the building, he was stopped by a member of the Gestapo and was asked for his papers; he had a fake identity card, but because of his name, the Gestapo agent suspected him of being Jewish; he replied that he was Muslim, and the agent ordered him to recite a verse of the Quran, which he was unable to do; he was led to a building on the Place Bellecour and was beaten by members of the Gestapo, though not by Barbie himself

17:35 Barbie made the witness empty his pockets and interrogated him; during the interrogation, Francis André, an associate of Barbie's (also known by his nickname, 'Gueule Tordue' or 'Twisted Mouth') entered; he was angry because he had wanted to shoot someone in the same street where Mr. Nahmias had just been arrested, but was unable to because the street was too busy; André asked Barbie whether he could 'have' Mr. Nahmias, but Barbie replied, 'No, he's mine.' Mr. Nahmias was taken to the building's basement and instructed to face the wall; in the basement, he saw many people lying on the ground bleeding and others with their hands on their heads, standing against the wall; the next day, he was taken to the Montluc prison, where he told others the story of his arrest, and he was told that the man who questioned him had been Barbie;

17:38 Nahmais spent almost a month at Montluc; he recalls watching friends and entire families being deported; he details the terrible condition of a friend who was personally interrogated and tortured by Barbie

17:41 On July 26, 1944, he was called at dawn for a transport, and witnessed Barbie present for the transport's assembly and departure; he was sent to Drancy, where there were many children, no water, and no light; four days later, he was selected for a transport to Auschwitz; 400 members of that transport were children; he describes the conditions of the transport to Auschwitz, his arrival at the camp, and his selection for Auschwitz I; he estimates that 90% of his transport was sent directly to the gas chambers upon arrival; he describes elements of life in Auschwitz

17:53 Mr. Nahmias describes the forced labor at Auschwitz, which for him consisted of breaking rocks; the commander of his forced labor was required to kill a certain number of men each day, in order to retain his rank; he explains that according to the laws of war, prisoner camps had to be illuminated at night so that opposing forces would not bomb them; Auschwitz 1 and the SS camp looked identical from above, and the Nazis illuminated the SS camp to try to trick the Russians overhead into bombing the concentration camp instead of them; Mr. Nahmias then worked making shoes in the camp

17:57 The witness explains that on January 17 1945, the Russians were approaching the camp and so he and many other prisoners were sent on a Death March; on that day 12,000 people died; he survived and was sent to Gross-Rosen, another concentration camp, where he spent several weeks before being transported to Dachau, which was riddled with typhus at that point; he was subsequently transported to Mindhorf, where he was sent a package of food by the Red Cross; he was sent to yet another camp, this time underground, and then by train toward Switzerland as the Allies were approaching; he and five others jumped from the train, but they stumbled upon the Luftwaffe; he was shot in the leg, and then a unit of the U.S. Army arrived and he was eventually liberated

18:08 President Cerdini questions the witness as to specifics of his initial arrest in Lyon, and as to how he was able to identify his interrogator as Barbie

18:11 Cerdini asks for specifics as to the type of train used to transport the witness to Auschwitz, and as to whether he knew about the existence of the gas chambers upon his arrival

18:13 Prosecutor Bermann asks the witness how he was able to identify Barbie in their first encounter 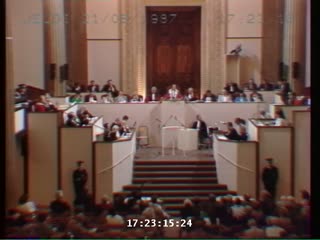