15:00 Prosecutor Libman asks the witness, Mrs. Paulette Roche, to authenticate photos of children from Izieu, which were published in a book written by Prosecutor Klarsfeld

15:01 President Cerdini calls the next witness, Dr. Adolphe Waysenson, to the stand; the witness presents himself to the court and is sworn in

15:02 The witness testifies; he stayed with his two younger siblings in the children's home at Izieu from the end of summer of 1943 through the winter of 1944, while his parents hid; when his parents found secure shelter in the winter of 1944, they returned to Izieu to pick him up, not long before the Izieu raid; the witness was friends with many of the children who were taken in the raid

15:04 Prosecutor Klarsfeld asks the witness about the fate of his family after being reunited with their parents; they found refuge in a village of the Gard region of southern France, but his father was arrested there on April 9, 1944; he never returned from his deportation; the rest of the family somehow remained unfound until the end of the war

15:06 President Cerdini calls the next witness, Mr. Paul Niedermann, to the stand; the witness presents himself to the court and is sworn in

15:08 The witness is a German Jew who was in 1940 interned at the Gurs camp in the French Pyrenees, and then at the Rives Altes camp; he describes his escape from the camp with the help of female Resistance members posing as social workers at the camp; Mrs. Zlatin, later the director of the children's home at Izieu, helped him to escape; he was taken to a children's home in Palavas les Flots, near Montpelier, with his childhood friend; they lived there and worked for the Zlatin family's agricultural business, until the Germans arrived in southern France, at which point the witness and his friend moved quickly through several children's homes in the O.S.E. (Oeuvre de Secours aux Enfants) network; in 1943, Mrs. Zlatin contacted them and asked them to come to her children's home in Izieu, where they would help her husband tend the garden, which was responsible for feeding the 45 children staying there; after a certain time, Mr. and Mrs. Zlatin found a way to smuggle the witness into Switzerland, but his friend, who was much smaller for his age, looked too young to go and was subsequently deported with the other children of Izieu

15:14 Prosecutor Klarsfeld asks the witness about the fate of his parents; he explains that his mother and father were deported in the end of 1942, and that both were killed upon arrival at Auschwitz and Buchenwald, respectively

15:15 Prosecutor Rappaport explains that the witness' friend Theo Reiss was killed by firing squad with Mr. Zlatin in Reval, Estonia, and asks the witness to describe the life and personality of his friend

15:19 The Attorney General asks the witness to recall the circumstances of his family's expulsion from Germany in 1940, and specifics of his childhood in Germany prior to his family's deportation to the camp in the Pyrenees

15:23 President Cerdini presents the next witness, Marie-Antoinette Cojean, who is deceased; the Attorney General asks that her deposition be read aloud

15:23 A clerk reads the deposition of Mrs. Marie-Antoinette Cojean; the witness worked as the secretary of the municipal government in Belley, the town nearest to Izieu; she helped Mrs. Zlatin to move the 43 children into the house at Izieu; she learned of the raid the day it happened, and immediately went to Izieu, where she saw the children's cereal bowls still on the breakfast table; she does not know the names of any of the officers who conducted the raid, nor did she hear Barbie's name said in that era; the witness was a guest at Izieu for a Christmas party in 1943; she says that she does not know of any documentation of the raid on the part of the town of Belley

15:28 A clerk reads the deposition of Mrs. Geneviève Pichon; the witness was an employee of the candy factory in La Bruyère where the German trucks carrying children from Izieu stopped to refuel immediately following the raid; the children were singing and most seemed happy because they had been told they were going on a hike; the witness saw her nephew Michel, who was not Jewish; the officers allowed Michel to descend from the truck, at which point the witness fainted; the witness explains that had her nephew not shouted to her and had she not been standing in the courtyard of the factory, he certainly would have died with the rest of the children of Izieu

15:31 President Cerdini reads the list of witnesses scheduled to appear the following day, but none are present; Cerdini suspends the hearing 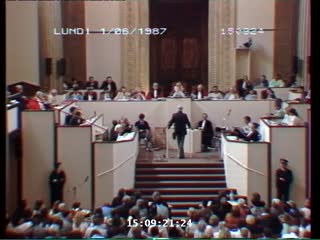