15:02 Witness Elie Wiesel testifies, describing the particular emotional challenges of life in the camps as a child; Prosecutor Jakubowicz asks the witness to give his opinion on the definition of a crime against humanity

15:09 Mr. Wiesel describes genocide as, "a philosophy, more than a war strategy." He describes the uniqueness of the Nazi genocide, and explains his opinion that we should never compare it to other genocidal acts, because "to compare is to minimize." He comments on France's complicity in the Holocaust, saying that France's actions should be put to trial, but not in conjunction with Barbie.

15:16 Defense lawyer Vergès questions the witness, asking him whether he knew of a report, published in 1958, which stated that at least 15,000 children were being killed per month in French-administered camps in Algeria. Mr. Wiesel replies that he did not know, as he was living in New York at that time, but that had he known, he would have spoken out against the French government.

15:18 Vergès comments that the witness is an American citizen, and asks him whether he was aware of the fate of Vietnamese children due to the U.S. presence during the Vietnam War. He asks Mr. Wiesel to comment on the My Lai massacre, and Mr. Wiesel replies that when the press uncovered the event a year after the fact, he was outraged and organized a protest. Vergès question the witness about the Deir Yassin massacre, perpetrated by Zionist paramilitary groups on a Palestinian village near Jerusalem, and the witness replies that he does not feel the line of questioning is appropriate; he speaks out in defense of the State of Israel, saying that the violence in the region is due to Arab countries' inability to accept the terms of the 1948 agreement; Vergès disagrees, criticizes Mr. Wiesel for supporting Israel unconditionally instead of 'having a lucid gaze toward his own country,' and admonishes him for not answering his question about Deir Yassin directly; Mr. Wiesel retorts that Vergès' words are deplorable

15:25 President Cerdini calls the next witness, Henri Perret, and he is sworn in

15:27 The witness is the current mayor of Izieu; he was not present at the 1944 raid and only moved to Izieu in 1969; he explains that there are only about 15 residents of Izieu who lived there while the children's home was in operation, and only half of those have a memory of the event; he explains that the events of 1944 are so far from the daily lives of his citizens that most inhabitants have trouble forming an opinion on the subject, and find it difficult to talk about openly, but that they carry the pain of the event with them

15:33 Prosecutor Rappaport asks the witness whether, prior to his inauguration as mayor, the village commemorated the children who were deported; he replies that now they are honored twice a year, but prior to his leadership, there was no official commemoration; Prosecutor Rappaport asks Mr. Perret whether he has searched to understand what happened in Izieu on April 6, 1944; Mr. Perret replies that he is not a witness to the event itself, and that he has complete confidence in the testimony of Julien Favet; Prosecutor Nordmann comments on the plaque which was placed on an exterior wall of the house at Izieu in 1946; Prosecutor Jakubowicz asks the witness whether he is aware that the children of Izieu were deported and killed because they were Jewish; Mr. Perret replies that he is aware of that, and that he has been criticized for not using the word 'Jewish' to describe these children in commemorative ceremonies; he explains that he is a secular mayor and was prior to that a secular educator, and for that reason he has preferred not to comment on the religion of the children

15:39 President Cerdini calls to the stand the next witness, Robert Meriaudeau; the witness presents himself to the court and is sworn in

15:41 The witness was 7 years old in 1944, and does not have personal memories of the Izieu raid, but he is the mayor of nearby village Brégnier-Cordon, where the trucks carrying children from Izieu stopped on their way to deportation; Mr. Meriaudeau describes the stone memorial to the children of Izieu erected 1.5 km from the village, and explains that the residents of the village visit it on foot three times per year: on Bastille Day, on Armistice Day, and on the French day of remembrance of the deportation; he explains that he thinks it very important to remember these children as Jewish; he describes his wish to turn the house at Izieu into a memorial to the memory of the children

15:52 Prosecutor Rappaport comments that one of the faces of the monument near Brégnier-Cordon, which was erected in 1946, features the faces of children inside of a star of David; he asks Mr. Meriaudeau whether the monument was erected in an attempt to prevent future generations' forgetting the event; he explains that this is precisely the case, and that the monument has been defaced by graffiti swastikas on several occasions; Prosecutor Rappaport asks Mr. Meriaudeau why, in his opinion, Mr. Wucher, whom he alluded to earlier in his statement, was shot and killed by members of the Resistance; he replies that he was a known collaborator; Mr. Wucher's son, Rene, had previously testified in this case-- he was the boy who was taken in the Izieu raid but was allowed to leave Gestapo custody when he recognized his aunt at the candy factory where the trucks stopped to refuel

15:57 Prosecutor Libman asks that photographs of the monument to which the witness had referred be circulated to the jurors

16:00 President Cerdini calls a civil party, Alexandre Halaunbrenner, to testify; the civil party presents himself to the court 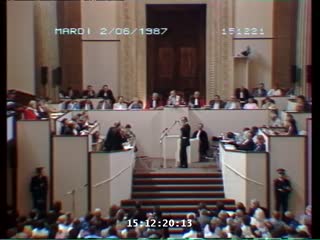