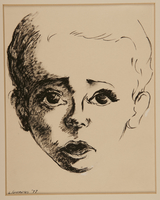 Expressive portrait sketch of 4 year Robert Michael (Bobus) Gurdus drawn by his mother Luba in 1977. Bobos and his parents, Luba and Jacob, were confined to the Warsaw Ghetto in fall 1939 following the occupation of Poland by Nazi Germany that September. By December 1941, Luba and Bobos had gone to Brody Male near Lublin, and then to Zwierzyniec. Bobos died of diphtheria on September 12, 1942. Luba was later sent to Majdanek concentration camp. She survived and emigrated to Palestine in 1946.

Artwork Title
My son, Bobus, at the Age of Four
Date
creation:  1977

Physical Description
Portrait sketch in brush and pen on paper of the head and face of a young boy. He has large expressive eyes with long lashes, a well defined nose, and his mouth is open as if speaking. The left side of his face is shaded, and the right side is sketched in outline. It is mounted with a second work, a drawing by the boy, as one commemorative work by the artist.
Dimensions
overall: Height: 7.500 inches (19.05 cm) | Width: 6.500 inches (16.51 cm)
Materials
overall : paper, ink
Signature
front, lower left corner, ink : L. Gurdus '77
Contributor
Artist: Luba Gurdus
Subject: Luba Gurdus
Subject: Robert M. Gurdus

Biography
Luba Krugman was born on August 1, 1914, in Bialystok, Poland, to Jewish parents, Tewja and Anna Krugman. The family settled in Warsaw. In 1930, she attended art school in Lausanne, Switzerland. The next year, she went to Berlin, Germany, to study at the Academy of Fine Arts and Reimannschule for Applied Art. Hitler came to power in Germany in 1933, and that year Luba returned to Warsaw. Luba was an editor and illustrator at Bluszek Publishing. She married Jacob Gurdus in 1935. She began working Stybel Publishing, owned by her brother-in-law Abraham Joseph Stybel. Luba and Jacob had a son, Robert Michael, born on August 24, 1938, in Warsaw.

On September 1, 1939, Nazi Germany invaded Poland. Warsaw was occupied on the 29th. On November 23, Jews were required to wear white armbands with blue Stars of David to separate them from the general population. Schools were closed, property confiscated, and Jewish males were conscripted for forced labor. Luba and her family and all the city’s Jews were confined to a walled in ghetto in fall 1939. Food was scarce and disease was widespread. By December 1941, Luba and Bobos had gone to Brody Male near Lublin, and then to Zwierzyniec. Bobos died of diphtheria on September 12, 1942. Luba’s parents also died. Luba was interned at Majdanek concentration camp.

The war ended in May 1945. Luba and her younger sister Mira emigrated to Palestine in 1946. Luba worked for Yedioth Publications and established a woman’s magazine, L’Ischa. She resumed her art career and created a series of drawings about her Holocaust experiences which were exhibited in Israel and, later, the United States. In 1948, she left for New York on the Marine Carp, arriving on January 7. She rejoined Stybel Publishing. She had been separated during the war from her husband Jacob, who had served in a Jewish Unit of the British Eighth Army. Luba received a doctorate in art history from New York University in 1962 and later joined the Research department of the Frick Art Library. In 1978, she published “The Death Train” an illustrated account of her experiences. Luba, 97, died on December 6, 2011.

Robert Michael Gurdus died of dyptheria at the age of four in 1942. His mother, Luba Gurdus, was caught trying to escape the Nazis and sent to Majdanek concentration camp, which she survived.

Legal Status
Permanent Collection
Provenance
The drawing was donated to the United States Holocaust Memorial Museum in 1989 by Luba Krugman Gurdus, mother of Robert Michael Gurdus.
Funding Note
The cataloging of this artifact has been supported by a grant from the Conference on Jewish Material Claims Against Germany.

The collection consists of two drawings relating to the experiences of Luba Krugman Gurdus and her son Robert Michael (Bobus), who perished, age four, during the Holocaust in Poland.

Sketch of a train created by Robert Michael (Bobos) Gurdus on his fourth birthday, August 24, 1942 in Zwierzyniec in German occupied Poland. Bobos watched train cars full of people being deported through the kitchen window of his home. Once, while watching the train go by with a non-Jewish Polish friend, the friend told him: "Soon, you will be in train." According to his mother, Bous had a slight awareness of the situation and was unsettled by what he saw and heard. Bobos and his parents, Luba and Jacob, were confined to the Warsaw Ghetto in fall 1939 following the occupation of Poland by Nazi Germany that September. By December 1941, Luba and Bobos had gone to Brody Male near Lublin, and then to Zwierzyniec. Bobos died of diphtheria on September 12, 1942. His mother Luba was later sent to Majdanek concentration camp. She survived and emigrated to Palestine in 1946.