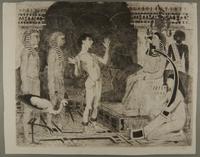 Drypoint etching created by Lovis Corinth in 1894 depicting Joseph as shackled slave in a loin cloth, standing before Pharaoh. He is gesturing as he explains: The dream of Pharaoh is one; God has revealed to Pharaoh what he is about to do. Genesis 41: 25-33. Corinth created the print for his first graphic series, Tragicomedies, plate five of nine etchings, one of only 20 that he printed. The series theme involved the use of unusual details to add a farcical element to great events, such as the almost caricatured figure of Joseph, usually depicted as handsome. Corinth was studying anatomy at the time and the figure of Joseph was probably created from a live model. Corinth (1858-1925) was a popular German painter and printmaker, known for landscapes and biblical scenes, and an early proponent of the Impressionist style. The Nazi government established a Reich Culture Chamber to conttrol all aspects of German culture. All art had a propagandistic value and its purpose was to glorify Nazi-determined German virtues. In July 1937, the Great German Art Exhibition displayed approved works. Nearby was an Exhibition of Degenerate Art that displayed the demoralizing and corrupting works of modern art. Corinth’s late works were among those featured in this exhibit and his works were removed from all German museums.

Physical Description
Lithograph in black ink on rectangular white paper depicting the interior of an ancient Egyptian throne room. Dominating the center is a slender, animated youthful man with a large nose and short dark hair, wearing leg shackles and a white loin cloth. He is bathed in light and his features are drawn in realistic detail. He is gesticulating and speaking before a statuelike man and woman in ornate Egyptian headdresses seated on a throne on a raised dais. In the left foreground is an ibis; on the right, a nude woman plays a harp. In the left middle ground are 2 featureless men in striped wig covers and skirts, holding the chains of the leg shackles. In the left and right background are columns with geometric patterned capitals framing a dark oblong arched passageway with a dark skinned man standing on the right. The walls and floor have hieroglyphic and geometric details. It is a detailed image with dense hatchwork and shading. The artist’s name is inscribed in the lower right border and the date, c. 1894, is etched in the lower left. The print is affixed to a white mat board with a window frame display with penciled text in the lower left of the window board and in blue ink in the lower right of the mat board.
Dimensions
overall: Height: 17.000 inches (43.18 cm) | Width: 23.375 inches (59.373 cm)
pictorial area: Height: 13.875 inches (35.243 cm) | Width: 16.500 inches (41.91 cm)
Materials
overall : paper, ink, graphite
Signature
front, lower right, pencil : Lovis Corinth
Inscription
front, lower left of window board, upside down, pencil : 423 / Λ07
front, lower right of mat board, blue ink : Or. Rad. von Lovis Corinth
Contributor
Artist: Lovis Corinth
Subject: Lovis Corinth

Biography
Lovis Corinth (1858-1925) was a prolific and popular German painter and printmaker, creating works on a variety of subjects, including portraits, still-lifes, landscapes, and allegorical and biblical subject paintings.
He was born Franz Heinrich Louis Corinth on July 21, 1858, in Tapiau, East Prussia, Germany (Gvardeysk, Russia), to Franz Heinrich and Amalie Wilhelmine Opitz Corinth. His family owned a farm and tannery. From 1876-1880, he attended the Konigsberg Art Academy where he specialized in history painting and studied under Otto Gunther. He then went to Munich and joined the class of Ludwig von Lofftz at the Munich Art Academy. From 1882-83, Corinth completed his mandatory military service. From 1884-1887, he enrolled at the Academie Julian in Paris and trained with William-Adolphe Bouguereau and Tony Robert-Fleury.

He returned to Germany in 1887 and adopted Lovis as his professional name. His father died on January 10, 1889, and Corinth inherited property and sizeable investments, providing him with financial stability. He moved to Munich and became a founding member of the Munich Secession in 1892 and the Free Association in 1894. Corinth was one of the major proponents of Impressionism in Germany and was part of the first exhibition of the Berlin Secession, a German Impressionism association, in May 1899. Corinth had a one-man exhibition at Paul Cassirer’s gallery in Berlin and moved permanently to that city in 1901. That year, he opened a painting school for women in his studio; he later married one of his students, Charlotte Berend. Their son, Thomas, was born on October 13, 1904, and a daughter, Wilhelmine, on June 13, 1909. By 1910, Corinth’s work was well-known in Germany, through exhibition and reproductions in local papers and art journals, as well as his writings on art. In December 1910, when Max Liebermann was forced to resign as President of the Berlin Secession, Corinth assumed the position.
In December 1911, Corinth suffered a stroke. He was partially paralyzed on his left side and his painting style became more Expressionistic. The Secession was overseen by Paul Cassirer during Corinth’s illness, but in 1915, Corinth’s health improved sufficiently for him to serve as President. In 1917, the Prussian Ministry of Culture awarded him the title of Professor. During a trip to the Netherlands, Corinth fell ill with pneumonia and died on July 17, 1925, age 66, in Zandvoort.
After the Nazi Party came to power in 1933, Corinth’s late works were classified as “degenerate art” and featured in the Exhibition of Degenerate Art [Entartete Kunst] held in Munich in 1937. Almost three hundred of Corinth’s works were confiscated from German museums for the exhibition; seven were highlighted in the “inadequate craftsmanship and artistry” category. In 1939, the Nazi regime sold several of his confiscated works at auction in Lucerne, Switzerland.

Legal Status
Permanent Collection
Provenance
The Lovis Corinth etching was donated to the United States Holocaust Memorial Museum in 2010 by LeRoy E. Hoffberger.
Funding Note
The cataloging of this artifact has been supported by a grant from the Conference on Jewish Material Claims Against Germany.