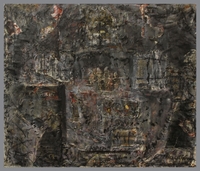 Biography
Alice Lok (later Cahana, 1929-2017) was born in Budapest, Hungary, to Jehuda (1900-?, Jenö) and Theresia Schwarz Lok (1904(?)-1944(?), Terez). She had two younger brothers, Armin (1933-1944(?), Öcsi) and Imre (1938-1944(?), Imi) and an older sister, Edith (1926-?). The family lived in Sárvár, Hungary, near the Austrian border. Her father worked for the Lok family's carpet weaving and import/export business. He often traveled for work and spent a lot of time in the business' Budapest office. Alice's grandfather was a popular community leader and president of one of Sárvár's synagogues. Alice was very close to her grandfather and admired how he gave back to the community, regularly inviting Jewish orphans to eat with the family and hosting Torah scholars for meals on the Sabbath. Her grandfather told wonderful stories, and would often ask Alice to write them down for him.

Between 1938 and 1941, Hungary passed race laws similar to Germany’s Nuremberg laws, and joined the Axis alliance in 1940. In March 1944, German forces occupied Hungary. In April, Hungarian authorities ordered the Jewish population into ghettos. A ghetto was established in the brick factory in Sárvár, where the majority of the Jewish community was forced to live. Due to Alice’s grandfather’s position, her family was moved to a smaller, additional section of the ghetto near the synagogue, school, and butcher. While living there, Alice’s family had some special permissions, and were allowed to leave the ghetto once or twice a week to take a trip to the market and purchase food. One day, Alice’s father learned that the Jewish men would be sent to a labor camp, so he hastily said goodbye to his family and traveled to his office in Budapest.

In June, fifteen-year-old Alice, her mother, and her siblings were among those Jews marched past their own homes, now occupied by other people, to the railroad station. They were all deported to Auschwitz concentration camp in German-occupied Poland. Alice’s mother and brothers were sent in a separate direction, and likely murdered in the gas chambers. Edith told Alice to go with the group of children 15-and-under so she could get more food. After delousing treatment and having her head shaved, Alice was placed in the C camp. She spent several days trying to locate Edith, and learned she might be in the B camp. Alice traded her ration of bread and margarine for a scrap of paper and a pencil so she could send a note to the other camp. After three days, Alice received a response saying that Edith was coming. Edith switched places with someone in Alice’s camp when food rations were being moved between the camps by prisoners. Every Friday night, on the Sabbath, Alice, Edith, and several other children assembled secretly in the latrine to pray together. Edith became ill and was sent to the infirmary. In order to visit Edith, Alice exchanged her bread ration and carried out unpleasant tasks, like removing dead patients or taking out the waste buckets. Once Edith felt better, Alice snuck her out of the infirmary so she would not be sent away. At one point, the sisters were taken to a gas chamber, but it malfunctioned and they were returned to their barracks.

In October 1944, Edith and Alice were deported to Guben, a subcamp of Gross-Rosen concentration camp in Germany, where they were put to work in a munitions factory. Around Christmas, the guards told the children that they had to decorate their barracks, and those with the best decorations would receive a prize. There was nothing to decorate with, but Alice suggested that they form the decoration themselves. All the children of her barrack arranged themselves into the shape of a candelabra, and won the prize, a can of snails. In February 1945, Alice and Edith were sent on a forced march. At one point, Alice, Edith, and a friend try to escape by hiding in a hay barn, but the locals turned them back over to the guards leading the original march. They were forced onto a train car and transported to Bergen-Belsen concentration camp. The conditions there were horrible, with very little food and water, and Alice and Edith became very weak and lice-ridden.

On April 15, the camp was liberated. Two days later, Edith, who was very sick, was taken to a Red Cross Hospital. Alice tried to stay with Edith, but was not allowed to do so. In July, Alice was sent to Sweden along with other Jewish children. Alice repeatedly tried to find her sister, but she never saw her again. Her mother and brothers were likely killed upon arrival at Auschwitz. While recovering in Sweden. Alice learned that her father, Jenö, had survived and was in Hungary. He had been conscripted into a labor battalion and transported to the Kőszeg forced labor camp in May 1944. Jenö was transferred to the Ermihalyfalva forced labor camp in November, and then to the Budapest ghetto. He was liberated on January 18, 1945. Jenö had been able to secure protective papers from the Swedish legation, provided by Raoul Wallenberg, which helped him survive. Eventually, Alice returned to Hungary and reunited with her father. He married his second wife, Aranka Schlesinger, and Alice decided to leave Hungary and go to Palestine (now Israel). She was a minor and had to force her father to sign the papers letting her leave and immigrate illegally.

Alice married Moshe Cahana (1922-2004), a rabbi, in December 1951, in Tel Aviv, Israel. They moved to Sweden in 1952, and remained there until their immigration to the United States in 1957. The couple had three children and settled in Houston, Texas. Moshe worked as a pulpit Rabbi and Alice further developed her artistic style and created many pieces. Initially Alice painted abstract works focused on light and color, but her style evolved dramatically following a trip to her birthplace in Hungary in 1978. She began to work with collage and abstract elements to more directly reflect her own experiences during the Holocaust. She also utilized her works as a way to memorialize the dead and convey what happened to her family and the larger Jewish community.

Mixed media collage titled "Have you seen my sister?" by Alice Lok Cahana