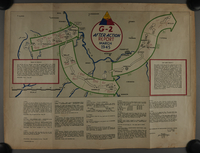 After action report poster of the 11th Armored Division, US Army, for southwestern Germany from March 3 - 31, 1945. The top section depicts a map with three green arrows outlining the advance of the 11th Armored through southwestern Germany. The left arrow tracks northeastern movements from March 3 at Prum to March 9 at the Rhine River and Andernach. The center shows the southern push on March 10 from Bullay to the eastward shift ending in Worms on March 21. The right arrow tracks northeastern movement from Oppenheim on March 28 to the attack at Fulda on March 31. The Division continued south and was in Amstetten, Austria, when Germany surrendered on May 7, 1945. The Division landed in Normandy, France, on December 16, 1944, and took heavy losses in the Battle of the Bulge that month. In February 1945, the Division attacked the German defensive line near Belgium, and, in March, pressed into Germany. After the war, the 11th was placed on occupation duty until it was inactivated in August 1945.

Physical Description
Discolored offwhite paper poster with a graphic depiction of troop movement across Germany in the upper two thirds of poster, with 5 columns of text below. The upper section has a map on a light green background enclosed within a rectangle with a thin black border. Blue lines for the Rhine and its tributaries are in the center; several cities are named and marked with black dots. In the upper center is a red outlined circle with the title, G - 2 After Action Report, and the 11th Armored insignia, a blue, red, and yellow triange with an Arabic numeral, 11, a black tank tread, and a red lightning bolt. Below, 3 large green outlined arrows cross the map. The arrows are divided by green lines with dates and troop locations; outlined black arrows indicate the movement of smaller units. The left green arrow runs from Prum to Andernach, the center, from Bullay to Worms, and the right from Oppenheim to Fulda. On the left is a red outlined rectangle enclosing 2 paragraphs of English text, under the heading, Prior to Contact. It summarizes a March 2, 1945, after action report on the 5 Paratrooper and 4 Infantry Divisions, describing actions, enemy resistance, morale, and the weather. On the right side of the map is a red outlined rectangle with a paragraph and the heading, Exit Army Group G, that eulogizes and exults over the decimation of the German Southern Army Group. The scale measure is three-quarters of an inch for 5 miles and is printed in the lower left corner. Below the map are 5 columns of text with short paragraphs describing military actions: entries in column one: March 3, 4, 5; column 2: March 6,7,8; column 3: March 9, 9-11, 11-16, 17, 18; column 4: March 19, 20, 21, 29; column 5: March 30, 31, and officer's names. Publication information is in the lower left corner of the poster. The reverse is blank. The poster is creased from folding.
Dimensions
overall: Height: 22.000 inches (55.88 cm) | Width: 28.875 inches (73.343 cm)
Materials
overall : paper, ink
Markings
front, top center, title, in red circle, red and blue ink : G - 2 / AFTER ACTION / REPORT / MARCH / 1945
front, left center, in red rectangle, black ink : PRIOR TO CONTACT
front, right center, in red rectangle, black ink : EXIT ARMY GROUP G
front, lower right corner, black ink : BY COMMAND OF BRIGADIER GENERAL DAGER / E.T. CONLEY / Colonel GSC / OFFICIAL: Douglas / for SLAYDEN Major / Lt Col / G - 2
front, lower left corner, small font, black ink : 13/May 45/673d. Engrs. / 944
Contributor
Author: United States Army, 673rd Engineers
Publisher: United States Army, 11th Armored Division Headquarters, G-2 Section

The collection consists of two after action report posters depicting the movements of the 11th Armored Division, United States Army, across Germany and into Austria in March, April and early May 1945 during World War II.

Two-sided 11th Armored Division, US Army, after action poster for April and May 1945

Double sided after action report poster by the 11th Armored Division, US Army, prepared on June 15, 1945, to review troop movements through southeastern Germany in April 1945 and northwestern Austria on May 1-9, 1945. One side has a map depicting dates and movements of the 11th Armored through southeastern Germany, from April 10 at Neustadt through the capture of Linz, Austria, on May 5 and the liberation of two concentration camps, Mauthausen, and a subcamp, Gusen, on May 5 and 6. The other side has a detailed, text only presentation of Miscellaneous Extracts of Division activities. The Division landed in Normandy, France, on December 16, 1944, and took heavy losses in the Battle of the Bulge that month. In February 1945, the Division attacked the German defensive line near Belgium, and, in March, pressed into Germany. The Division continued south as detailed above and was in Amstetten, Austria, when Germany surrendered on May 7, 1945. The 11th was placed on occupation duty until it was inactivated in August 1945.