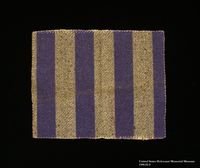 Biography
Anny Neumann (later Ann West) was born in 1920 in Leipzig, Germany, to Leo and Johanna Neumann. She and her boyfriend Heinz Rosenhain joined the Hachshara in Ellguth (Oberschlesien), Gut Winkel, near Berlin, and finally Neuendorf bei Fürstenwalde, where she also worked at a German military laundry. In April 1943, Anny and Heinz, now her husband, were deported with their friends to Auschwitz concentration camp in German occupied Poland. Anny was assigned to the camp police. Heinz, age 32, was sent to Ebensee slave labor camp, a subcamp of Mauthausen) where he died just before liberation in May 1945. Anny was sent on a death march from Auschwitz to Malchow, a subcamp of Ravensbrück, in January 1945. She escaped during the evacuation from Malchow in May 1945. She joined her sisters Emmy Pomper and Sabina Heliczer in the United States in 1946. Her mother survived Theresienstadt and immigrated to the United States in 1947. Anny later married Czech Holocaust survivor Robert West.

Legal Status
Permanent Collection
Provenance
The cloth was donated to the United States Holocaust Memorial Museum in 1988 by Ann West.
Funding Note
The cataloging of this artifact has been supported by a grant from the Conference on Jewish Material Claims Against Germany.

The armband is made of red cloth and inscribed with the letters "L.P." (Lagerpolizei).

Scrip, valued at 10 (zehn) kronen, issued in the Theresienstadt (Terezin) ghetto-labor camp in 1943. All currency was confiscated from deportees upon entry and replaced with scrip and ration coupons that could be exchanged only in the camp. The Theresienstadt camp existed for 3.5 years, from November 24, 1941 to May 9, 1945. It was located in a region of Czechoslovakia occupied by Germany, renamed the Protectorate of Bohemia and Moravia, and made part of the Greater German Reich.

The Ann West papers consist of Red Cross correspondence Ann sent to her sister in the United States just before her deportation to Auschwitz and following her liberation, an identification card documenting her mother’s status as a victim of fascism, a photograph of six girls working at a German military laundry, lyrics to concentration camp songs, and a copy of a poem by Johannes R. Becher. The Red Cross correspondence includes Ann’s last communication to her sister Emmy Pomper from the Hachshara at Neuendorf bei Fürstenwalde before her deportation to Auschwitz and her effort to contact Emmy following her liberation from Malchow. Johanna Neumann’s identification card documenting her status as a victim of fascism was issued in Leipzig in 1946. The photograph depicts a group of girls who worked with Ann at a German military laundry during their time at Neuendorf bei Fürstenwalde. They were deported to Auschwitz with Ann and most were killed. The songs and poem include typed lyrics to “Die Moorsoldaten” (mislabeled “Dachau Lied”) and “Buchenwaldlied” and a photocopy of “Kinderschuhe aus Lublin.” “Die Moorsoldaten” was composed by political prisoners in the Börgermoor concentration camp in 1933, “Buchenwaldlied” was composed by Jewish prisoners in Buchenwald in 1938, and “Kinderschuhe aus Lublin” was written by Johannes R. Becher after the war. The lyrics and poem were given to Ann West by camp survivors.

View All 7 Items in the Collection