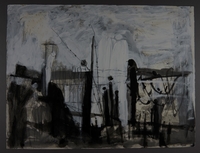 Abstract impressionistic white painting created by Motke Blum in 2004, evoking his experiences in forced labor camps in Romania during the Holocaust. His "need for constant renewal" led to minimalist work done in gradations of white. Motke was from Romania where violent persecution of Jews was common by the late 1930s. It increased when the revolutionary Fascist Iron Guard took over the country in September 1940. That year, 15 year old Motke was sent to a forced labor camp near Bucharest, then to Obor labor camp where he worked 20 hours a day, unloading trains and clearing bombed areas of rubble and dead bodies. He escaped and was recaptured twice, and was successful in his third attempt in 1944, all with the assistance of the Gordonia Zionist movement. He was smuggled out of Romania on a fishing boat and eventually reached Palestine.

Physical Description
Rectangular white paper with an image in pencil and black, white, and gray gouache. It depicts a man and a woman, painted in black, standing to the left, near a person, painted in white, who is being hung from a gallows. Four elongated, abstract white figures dominate the center of the work. Barbed wire fencing extends across the image from left to right. It is signed by the artist in the lower left corner.
Dimensions
overall: Height: 19.625 inches (49.848 cm) | Width: 26.000 inches (66.04 cm)
Materials
overall : paper, gouache, graphite
Signature
bottom left, pencil : Motke
Inscription
back, upper left corner, pencil : Hebrew text
Contributor
Subject: Motke Blum
Artist: Motke Blum

Biography
Motke Blum was born in Racaciuni (Moldava), Romania, on April 5, 1925, to Arie Lieb (1898-1983), and Leah Josef, (9/1904- 12/1989) His father was a shoemaker. Motke has two siblings, Haim, born in 1923, and Nissan, born in 1932. Prior to World War II, his family moved to Bucharest, Romania, where Motke attended a Jewish school and belonged to the Gordonia Zionist movement. In January 1939, Romanian soldiers terrorized Jews in Bucharest, randomly beating Jewish youth. At the age of 14, Motke experienced the brutality firsthand, when he was marched to the city square and forced to stand against a wall for hours while the soldiers beat and whipped him. At 15, he was taken to the Polygon forced labor camp near Bucharest, where he built artificial mountains with a shovel for the army’s target practice. He was given a quota, and if it was not reached, he was beaten. He was transferred to Obor forced labor camp which received all the supply trains for the city. He unloaded vegetables and cut frozen logs in the middle of the night. During the day, he painted the walls of the train station and warehouses to make them presentable for inspection by the army generals. Motke also worked extinguishing fires, clearing ruined buildings of dead bodies and debris caused by Allied bombing.
Motke continued his work with the Gordonia movement, by secretly meeting at a Rabbi’s house and helping refugees hide until ships could take them to Palestine. He escaped from Obor, but was captured and imprisoned, until a Gordonia member bribed a guard to resend Motke to Obor. The second time Motke escaped, he gave up his place on a departing ship for refugees who were from a death camp and in worse condition. He returned to forced labor and escaped a third time. He was assigned a spot on a refugee ship departing from Constanza, Romania, on the Black Sea. He was given a certificate granting him legal rights to emigrate to Palestine, in 1944. He was to board the Mefkure, but a friend asked him to change ships and he boarded the Bulbul instead. During the trip, the Mefkure was attacked and sank. As Motke helped retrieve survivors from the water, he claimed to have witnessed German soldiers on the submarine releasing Dobermans to attack and drown the victims. Since his name was included on the Mefkure’s passenger list, his mother presumed he was dead. Motke was able to notify her of his survival, once he finally reached Palestine. The Bulbul landed on the island of Igneada, due to a storm, and the passengers walked and rode horse carts for ten days before arriving in Istanbul, Turkey. They boarded a train that carried them through Syria to Haifa, Palestine. The British took Motke’s passport and sent him to Atlit immigration camp for two weeks. He moved to the kibbutz, Avuka, and then to Natanya, Palestine, where he worked as a plasterer.
Motke’s father was taken to Ployesht, Romania, early in the war, and the family did not hear from him until he returned at war’s end. His brother, Haim, was also taken to a labor camp near Bucharest, soon after the war began. All of Motke’s family managed to survive the war. Haim illegally immigrated to Palestine on the Hagana, in 1946. Motke’s parents and Nissan walked from Bucharest to Vienna, Austria, after the war ended. They tried to reach Palestine, but were deported to Cyprus by the British. Once the British mandate over Palestine ended in 1948, they departed for Palestine on the Hatikva.
In 1951, Motke moved to Jerusalem to study at the Bezalel Art Academy, where he graduated with honors. He married Shoshana Antman in Tel Aviv, Israel, on January 13, 1954. They have a daughter, Anat Galili-Blum, and a son. In 1956, Motke went to Holland for post-graduate work in the department of the Royal Silverwork Institute in Zeist. In 1958, he returned to Israel and established his studio. In 1965 and 1981, Motke embarked on museum study tours in the United States and Canada. For sixty-five years, Motke has had nightmares about his experience. His father, Arie, died in 1983, and his mother, Leah, died in December 1989, in Natanya, Israel.

Legal Status
Permanent Collection
Provenance
The painting was donated to the United States Holocaust Memorial Museum by Motke Blum in 2007.