Brief panning shot of water and the shore. The next scenes show the Zloczow pogrom, which took place from July 1 - 4, 1941. Before the Soviets retreated from Zloczow, the NKVD murdered several hundred civilians at Zamek prison. Many of those killed were Ukrainian nationalists, but some Jews and Poles were also murdered. The bodies were buried in four mass graves. After the Germans occupied Zloczow, the Jews were blamed for the murders and a pogrom ensued.

Corpses litter a muddy, grassy area. These are most likely the bodies of those murdered by the NKVD. A crowd of bystanders, including both civilians and Wehrmacht soldiers, watch as a civilian beats a Jewish man with a stick. The injured man lies on the muddy ground and pleads with his attacker. Panning shot of stacked corpses with people walking among them. These are again most likely those killed by the NKVD. A German soldier passes in front of the camera. Men standing in front of a building with barred windows - probably the Zamek prison. A group of three men pass by, beating a Jewish man who walks in front of them. Another German soldier appears in the frame. A mud covered man sits on the ground. He extends a hand to someone off camera. More exhumed corpses. A man covers his mouth to ward off the smell. More German soldiers. Jewish women are beaten by civilians while German soldiers watch. More stacked corpses. In the background a group of Jewish men and women carries a corpse. Jews were forced to exhume the corpses of those killed by the NKVD. Panning shot of bloated bodies. Jewish men carry an exhumed corpse. Three German soldiers stand with three civilian women. A man pokes at one of the corpses with a cane, perhaps to establish identity. Corpses in a wooded ravine. One of the mass graves used by the NKVD was in an apple orchard in the vicinity of Zamek prison. 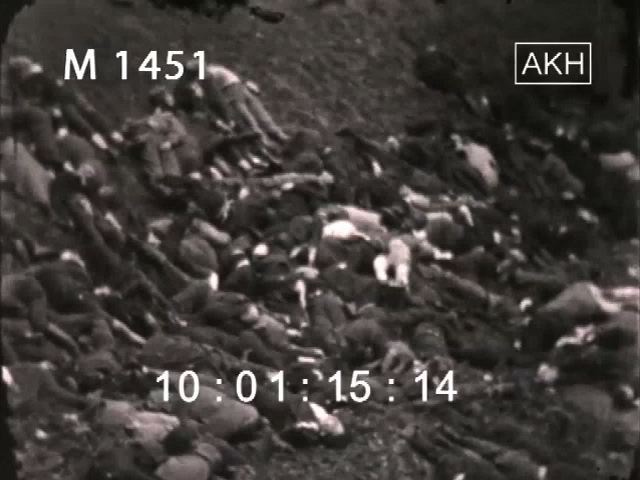 Legal Status
Permanent Collection
Film Provenance
Karl Hoeffkes has collected over 2,000 hours of rare original film material documenting the period from 1925 to 1946. The collection consists of mostly amateur footage in both black and white and color that focuses on Europe during the pre-war and mid-war periods. The United States Holocaut Memorial Museum entered a cooperative agreement with Agentur Karl Hoeffkes in April 2015 which enables the Museum to provide access to the entire AKH archive and use the material for future exhibitions, research and scientific purposes, and publications.
Note
The beating sequence (RG-60.1872) repeat twice at the end of Film ID 4215 beginning at 10:14:04.