Masaryk narrates montage about the suffering of Czechoslovakia during WWII

THE CZECHOSLOVAKIAN DOCUMENTARY UNIT PRESENTS A LETTER FROM PRAGUE No.1
A special newsreel produced by: JIRI WEISS, edited by: FRANTISEK SADEK, music by: VILEM TAUSKY
This film was shot for an anti-Nazi exhibition in London.

Foreign Minister Jan Masaryk sitting at his desk speaking to the camera. He says that he has been writing letters to his friends abroad, and that they are worried about certain problems. He says these friends are worried about our serving justice to the Germans and the transferral of the Czech population. He wishes the Germans could see what they left in their wake, so that they could understand the Czech people have experienced too much and they just want to go back to work. He continues to speak over a courtroom scene of the former Nazi Lord Mayor of Prague, who Masaryk says looks “shabby and servile.” He had proclaimed Prague a German city, banned the Czech language, and murdered Czech citizens. The head justice delivers the court’s decision, as Masaryk says that “his guilt is absolutely clear.”

Karl Hermann Frank, Secretary of state, and SS and Police Chief of Bohemia and Moravia, emerges from an American plane. Frank is depicted as the General of Police in Prague. In his official Nazi uniform, Frank salutes in a room of other officers. Masaryk says that “on his orders thousands were butchered, hostages taken, universities closed, teachers shucked.” EXT of a building with frescos, guard at the front gate - Kaunitz College, in Brno, one of the universities that was turned into a prison camp. CU text that Masaryk translates as “for our good, for nobody’s ill.” The interior courtyard with three poles used for hanging. Men stand facing the wall with wooden planks dividing each of them, where Masaryk says they would have to stand with their noses on the wall for “days, week, months.” Man on his stomach, hands and feet tied with chains to the bed.

People dig up bodies in a field. Masaryk says “whenever we dig into our liberated soil, we find ghosts of these frightful seven years.” These are the “remnants of our painters, priests, musicians, writers, technicians, workers, of our best men, of our brothers and sisters, of our fathers and sons,” Masaryk says, as men continue to pull bodies from the earth. They apply water to some of the clothes of the corpses, in an attempt to wash away the dirt to read the numbers on their jackets. CU of a number on a jacket pocket. Masaryk says doctors also attempted to identify corpses “by their teeth or special marks.” More corpses. A doctor sprinkles salt on a body. They lay the deceased back down in rows, “thousands were dug up, among them many of our Soviet allies.” Long rows of numbered coffins. Men at a burial site. Masaryk says that “the Red army and the Czech authorities have disinterred the victims to give them a decent burial.” Band plays, official burial.

People climb off bus with “Ravensbruck” on the side. Masaryk says it’s hard to believe that the German people didn’t know. He questions what kind of people would follow such a government. Nurses lead people from the bus, weak and feeble. A man caresses a woman’s face, she wears a striped jacket from the camp. People reunite.

The city of Lidice. Heydrich marches and salutes other officers. Nazi flag flies from a rooftop. Lidice was chosen at random to be destroyed. A sheet of paper, which Masaryk says is the official order from the Reichsführer for the destruction of Lidice. The Germans filmed the destruction, Masaryk explains, over a shot of a building in a field being blown up. The town in ruins. Photo of schoolchildren taken just before the attack on Lidice, according to Masaryk. He asks “where are they now.” School photos of a boy named “ Jiri Fruhauf,” a boy “Miloslav Liska”, a young girl “Vera Hanfova” and a young boy “Pavel Horesovsky,” Masaryk says that they have disappeared.

Photograph of soldiers standing beside a mass of corpses - the bodies of men who were killed in Lidice, when Hitler ordered the massacre of all men in the town. Mattresses against the wall, which were placed there so that bullets would not ricochet. Soldiers march along the street. Masaryk calls Czechoslovakia “a vast prison camp.” Soldiers set up a gun, crowds in the street. A sign breaks. People in the streets of Prague run. They knock down signs and letters on the sides of buildings, as Masaryk narrates saying that the people of Prague “rose to cleanse their cities by their own efforts.”
Men load guns and grab stalk hand grenades. They use pick-axes to loosen the blocks of stone from the ground, and then pass along the bricks in an assembly line to build barricades. Soldier climbs on a rooftop. Soldiers firing guns through windows. Bullet holes on the side of a building. A truck carrying troops drives up the street. Soldiers run from enemy fire, bodies. A soldier points his gun in a destroyed building. Explosion. One man drags the body of another. Men unroll a hose, which Masaryk says was used to sweep enemies out of cellars. Men put the hose down the bars of a cellar window. Men run along the sidewalk. Captured soldiers stand with their hands above their heads while they are frisked.

A spire on the tower of the Prague Astronomical Clock burns. A soldier fires an anti-tank weapon in a field, as Masaryk says, “all hopes are pinned onto the speedy arrival of the Red Army.” Tanks roll through town, one flies the flag of the Soviet Union, announcing the arrival of the Red Army. People approach the side of a tank, a soldier shakes their hands. More trucks and tanks. Masaryk says that Pilsen was liberated by the United States forces. He says they owe their freedom to Britain, America, and the Soviet Union. People throw paper out of a window onto the street. They burn a Nazi flag. Potted rose bushes in rows, surrounded by a crowd of people on the border. A woman cries. Masaryk narrates, explaining that these are people who came from all over to pay their respects to “the village that was murdered.” A man Masaryk identifies as a minor leader from Great Britain. A wooden cross, the landscape. Masaryk ends saying, “Let the dead rest in peace let the guilty be punished, let our land be cleansed, let the evil be banned and forgotten.” “THE END” 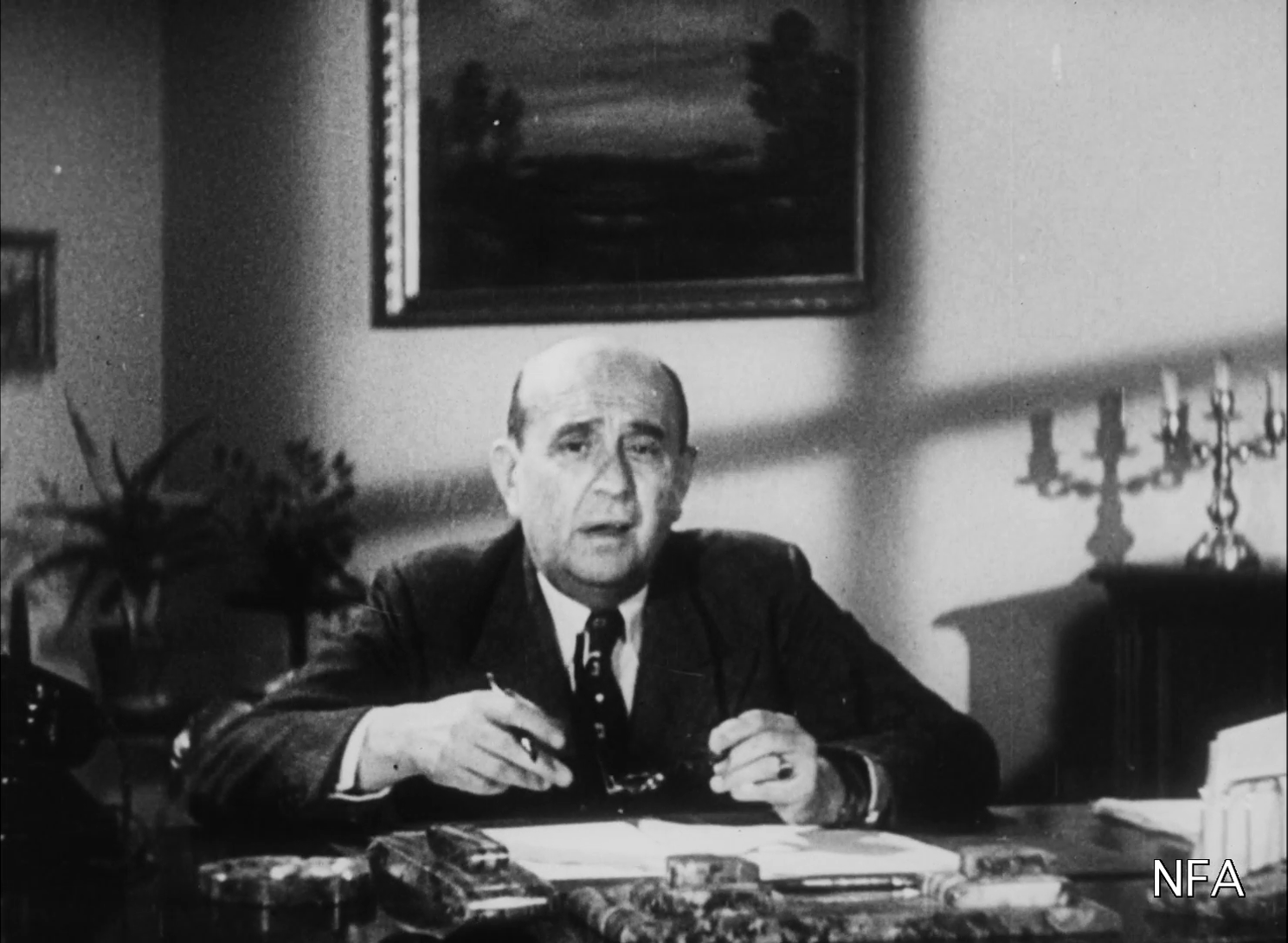 Conditions on Access
You do not require further permission from the Museum to access this archival media.
Copyright
NARODNI FILMOVY ARCHIV
Conditions on Use
For permissions and licensing film footage, contact Národní filmový archiv at nfa@nfa.cz.