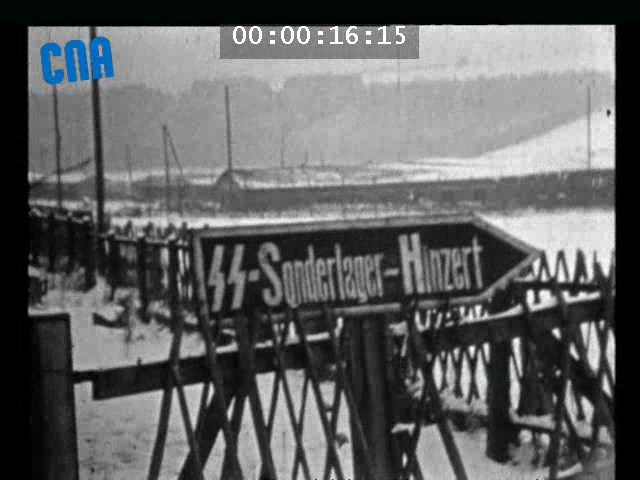 Legal Status
In process
Film Provenance
The United States Holocaust Memorial Museum received digital copies of films about Hinzert camp in 2017.
Note
The Hinzert camp (about thirty kilometers south-east of Trier) was initially made up of barracks where, from 1938, workers who were working on the motorway network and 'Westwall' lived. This camp burned on August 16, 1939 and was replaced by a new camp which served as an education camp for the workers who had been noted for insubordination. After the invasion of Benelux and France, Hinzert was integrated into the administration of the concentration camps. The prisoners were still recalcitrant workers, but from 1941 political prisoners came to join them. As a general rule, for many prisoners, Hinzert was the first step before being sent to other camps such as Natzweiler, Dachau, and Buchenwald. Few prisoners were released from Hinzert. The prisoners came mainly from Luxembourg, France, Belgium, Poland, the Netherlands. More than 70 Soviet prisoners of war were murdered at Hinzert, as well as Jews and Gypsies. Many of Hinzert's prisoners were sent to factories to work as slaves. Between 1600 and 1800 Luxembourgers passed by Hinzert; 82 died, including 20 shot in September 1942 following the strike and 23 on February 25, 1944 as leaders of the Luxembourg Resistance. The Nazis abandoned the camp on March 3, 1945, taking the prisoners to the interior of Germany.
Film Source
Centre national de l'audiovisuel
File Number
Source Archive Number: AV032559

Copyright
Copyright. Centre national de l'audiovisuel
Conditions on Use
Contact info@cna.public.lu for permission to reproduce and use this film footage.
Record last modified: 2020-02-04 10:38:42
This page: https://collections.ushmm.org/search/catalog/irn594570