Outdoors in Spišská Nová Ves. Children, including Emma and George and their friends Vitaliy and Peter, ski in the snow.

00:00:50 Women greet each other, shake hands (with Elizabeth Vasilevsky?) , and smile for the camera.One fixes her hair and looks in a handheld mirror. The two women link arms with George Vasilevsky (camera around his neck) and proceed towards the camera. CUs of the two women, snowball fight, probably at the residence of the Vasilevsky family. One writes a word in the snow with the tripod. 00:04:06 Teenage girl (Emma?) with glasses in scout uniform walks towards the camera.

00:04:18 Several women (possibly Ukrainian or Russian) in dark coveralls crouch beside brick rubble, pounding hammers. They smile for the camera. Male in the background. The girls smile and laugh while they repair damage (date unknown, could be January 1945 after the arrival of the Red Army), and pose for the camera (the two women in the earlier yard scene appear here). VAR shots of the infrastructure damage, demolished buldings, and piles of bricks. 00:06:43 Woman with kerchief begs the cameraman to stop filming. More group shots, women with sledgehammers. 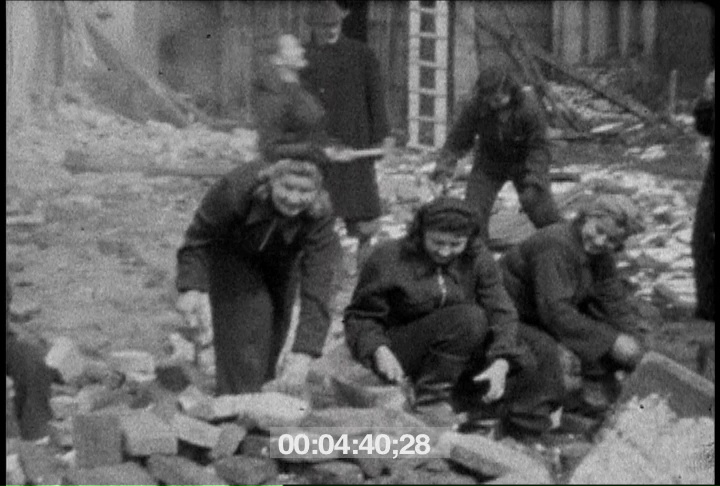 Credit
Accessed at US Holocaust Memorial Museum, courtesy of Helen French and Ukrainian Museum-Archives of Cleveland

Biography
George Vasley (born Vasilevsky 1902-1977) was a civil engineer born in the Ukraine. He served in the Ukrainian National Army as a cavalry officer. He fled to Czechoslovakia in 1923 after the Russian Revolution. He married Elizabeth Buazdil (b. 1909) in 1933 in Slovakia. They had three children: Emma (b. 1934), George (b. 1936), and Helen (b. 1943). George was imprisoned in a concentration camp in Poland from which he escaped after 30 months. He emigrated to the United States from Regensburg, Germany in 1947; his wife and children joined him two years later in 1949. The family settled in Harrisburg, PA. George Vasley was a bridge designer for the U.S. Army Corps of Engineers and the Pennsylvania Turnpike Commission.

Legal Status
Permanent Collection
Film Provenance
A collection of fifteen 8mm home movies recorded by George T. Vasilevsky in Slovakia from 1940 to 1944 donated by Helen Vasley French to the Ukrainian Museum-Archives (UMA) in Cleveland, Ohio. As part of a collaborative agreement with UMA, the United States Holocaust Memorial Museum received four of Vasilevksy's films to preserve and digitize in November 2017.
Note
Notes inside canister: "No. 9. 1944 Spišská Nová Ves. Emma and Jurka demonstrating their skill in the art of skiing... Vitaliy and Peter best friends of our children. Nazi's slave laborers, the Ukrainian women, working for a German company Pomona." However, USHMM does not consider these women to be forced to work as slave laborers and have found no record of a Pomona work camp in the area of Spišská Nová Ves. Photographs of the area around Spišská Nová Ves after the retreat of the Wehrmacht and the arrival of the Red Army in January 1945 showing similar damage are located here: http://www.kvhbeskydy.sk/oslobodenie-okresov-spisska-nova-ves-levoca-a-gelnica/.

At the same time as this movie was taken, the Holocaust in Slovakia and in Spisska Nova Ves had already started.
Film Source
Ukrainian Museum-Archives of Cleveland

A collection of fifteen 8mm home movies documenting family life in Slovakia from 1940 to 1944. The films were recorded by George T. Vasilevsky (later Vasley).

"AGFA 8 1941" Outdoor celebration with families, many smiling for the camera, eating and drinking. Some men in uniform. 01:04:50 Elizabeth, Emma, and George Vasilevsky pose for the camera. Woman with striped jacket. (This event could be "Mayales in Kvetnica. Liptaks, Stofkos, Strakas, etc" according to the canister). 01:06:28 Emma and George sit on a blanket outdoors, blooming trees. Girls dance in traditional costume. Slovak flag. Families at leisure. 01:09:42 First holy communion for Emma and her friends. The girls pose. Mothers talk. CUs, Emma. George biking in yard. Church of Saint Mary in Spišská Nová Ves. Elizabeth and Emma walk along the road. They pose with George. Emma walks in the main city square. Gardening at home with friend Vitia. CU, man says something to the cameraman. Emma in her communion dress. Picnicking along the Hrabusicka road and creek. Throwing stones in the creek, hiking. Automobile on road. 01:18:47 Gardening at home. 01:19:20 MS, cameraman George Vasilevsky, smoking. Emma on a grassy hillside. The Vasilevsky family fishes in the river.

Summertime leisure; paying a visit to the cemetery

Jirka (George) and Emma Vasilevsky at home in late summer. Together, they ride an adult bicycle. They swim in a shallow pool. 00:03:18 Emma accompanies George to the school for registration in first class. INT, mother Elizabeth eats at the table with the children. George flips the pages of a photo album with Emma and George. MS, George poses for the camera on his first day of school. George and a younger boy play on a rocking horse in the garden (probably "Strakova with her boy" according to the canister). Emma and George share a lounge chair and play in the sand while the mothers rest in the shade. The children in costume perform a play in the yard. 00:07:48 In town of Spišská Nová Ves, a woman approaches the camera. Herd of cows. Pan, LS, Spišská Nová Ves. George Vasilevsky slowly walks towards the camera with others. CUs, toddler. 00:09:45 MS, square in the city, camera focuses on a family of three. CU Emma with glasses. A couple laughs. CUs, baby (probably with "A. Persidsky and Anna with the baby Peter", according to the canister). Elizabeth with a bouquet of flowers at the cemetery. CU, headstone: "Mikulas Udut hrdinsky padol za slobodu Slovenska vr 1939. Cest jeho pamiatke! Na straz!Hlinkova Garda" The children and many others examine graves at the cemetery.

KODAK. Quick pan of workers in Spišská Nová Ves, Slovakia. The Vasilevsky family exits an automobile, including mother Elizabeth, daughter Emma, and son George. CUs. The children pick flowers and dance with George (the cameraman). Four schoolgirls on sidewalk and in town. An elegantly dressed man waves to the camera. Boy cries. Elizabeth and her children exit a building (possibly the Kvetnica Sanatorium where they visited Dr. Madziuk). Walking in the large park in the center of Kvetnice. Children, including Vitia and Peter Kalina, play in the garden with a rabbit at home in Spišská Nová Ves. CUs, adults (possibly the guests Odehnals, Stofkos and Strakas, according to the canister notes). They walk down a street. George plays with a toy car; Emma on a scooter. 00:06:07 Soldier in uniform joins the family. They walk along a city street with shops. Pan clocktower, Church of St. Mary. Slovak flag on building. CUs, soldier in uniform, eagle insignia on his camp. Shops. Mother with baby in carriage. George plays in the yard, with his father. He puts on the soldier's cap and poses for the camera; Emma styles the soldier's hair; the other adult in a suit walks toward the camera. VAR shots of the children playing outdoors with the tall man (not in uniform). Four men play cards and drink beer; women tend to the children. Brief INT shot. 00:17:00 George and Emma in overcoats walk towards the camera. 00:17:25 Military parade in Spišská Nová Ves. Crowds gather and line the streets. 00:18:19 INT, man at work in an office. At home, the children play outdoors with their mother, and then with their father George. Views of the Tatra moutains on the highway to city of Poprad. Automobile with Slovak license plates. Family poses for the camera. CUs, family members.