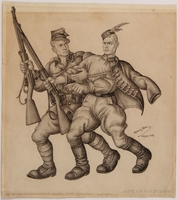 Pencil and ink drawing by Arthur Szyk created when he was living in exile in London in 1939.

Legal Status
Permanent Collection
Provenance
The drawing was acquired by the United States Holocaust Memorial Museum in 2014.
Funding Note
The acquisition of this artifact was made possible by the Crown Family.

Text only poster announcing restrictions on Jews in Budapest

Broadside issued by the Office of the Mayor of Budapest, Hungary. It details the regulations concerning aspects of Jewish life, such as when Jews are permitted to visit the cinema. It announces that they are forbidden to visit any other theater, cabaret, cinema, circus, music hall, or bar. Failure to comply with the regulations is punishable with imprisonment.

Contains a composite photograph of the entire staff, administration, and student body of the "HaYeshiva HaKedoshah Ponevezh" (Ponevezh Yeshiva) in Lithuania, circa 1930. Most of the student body perished in the Holocaust.