Excerpts from the private records of Nazi official, Kurt Kreikenbom, a gendarmerie colonel, including films titled "Polen" and "Einsatz in Russland".

In color, two order policemen in uniform on horses, street scenes and panning towards a building with trees in bloom, location unknown. WS, pan, large building. Switches to black and white, pan river, bridge. Polish town square with pedestrians (including an elderly Jew) and horse-drawn carriages, field with small homes.

00:08:46 Official ceremony in city. Nazi flags hanging and crowds line the street, order police in Nazi uniforms, saluting, cars driving through a gate with military leaders and high Nazis. 00:09:40 Officials exit a building, including chief of the Ordnungspolizei, Karl Daluege, at 09:39. Airplane with a swastika on the tail preparing for takeoff.

00:11:50 Man wades through flooded road blocking automobiles from crossing; the Nazis board horse-drawn carriages with local drivers. Parts of a lake are frozen in this village, huts with thatched roofs. The Germans continue to travel/tour in horse-drawn carriages, through water. Pan, village, homes, town square. 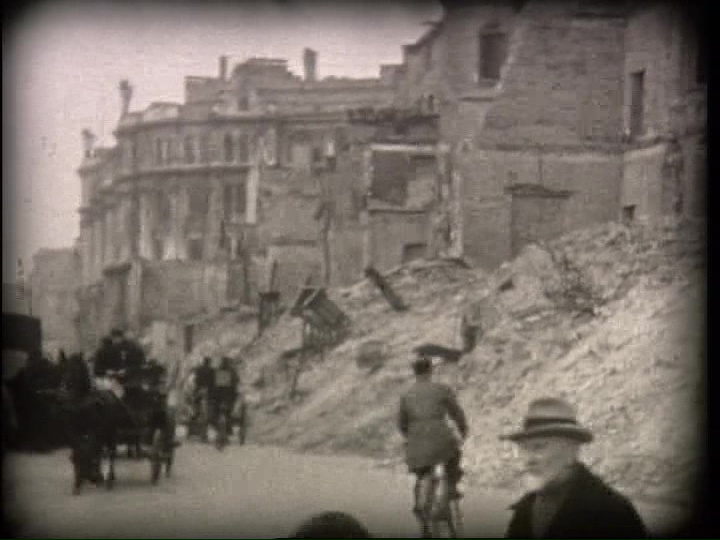 Legal Status
In process
Film Provenance
The United States Holocaust Memorial Museum obtained a digital copy of the private films of Kurt Kreikenbom, OTdGen, from the Villa ten Hompel via Juergen Matthaus in November 2017.
Note
The Villa ten Hompel had originally been built as a private residential house by Rudolf ten Hompel, a wealthy owner of several cement factories in the region surrounding Münster, in the 1920s. During the Second World War, the villa was used as the domicile of the regional uniformed police forces of the Wehrmacht section VI and therefore became the point of origin of National Socialistic injustice committed by desk-bound perpetrators and armed police forces.
Copied From
DVD
Film Source
Villa ten Hompel

Copyright
Copyright. Villa ten Hompel
Conditions on Use
Contact tenhomp@stadt-muenster.de for permission to reproduce and use this footage.
Record last modified: 2020-08-04 09:19:56
This page: https://collections.ushmm.org/search/catalog/irn619200