Signed etching of a Neu Synagogue, Breslau saved by a Jewish emigre family 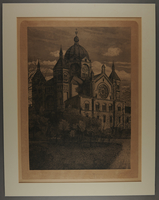 Large etching of the New Synagogue in Breslau, Germany, (Wroclaw, Poland) brought by Harry Ehrenberg and his family when they left Breslau for the United States in 1937. The etching is signed by the artist, Siegfried Laboschin. The synagogue, a center of liberal Judaism in Breslau, was destroyed by fire during Kristallnacht on November 9-10, 1938. The New Synagoge was designed by Edwin Oppler and built in 1865-1872. It was the largest synagogue in Breslau and one of the largest in Germany. In 1933, when Hitler was appointed Chancellor of Germany, Breslau had a Jewish population of over 20,000. By 1939, many had fled or been expelled to Poland and the Jewish population was around 10,000. In 1941 and 1942, most of the remaining Jews were deported to concentration camps.

Biography
Siegfried Laboschin was a painter, engraver, and lithographer in Breslau, Germany (Wroclaw, Poland.) He was born on May 23, 1868, in Gniezno, Poland, and was of Jewish descent. He studied at the Art Academy in Berlin from 1887-1889 and then at the Academy of Fine Arts in Munich until 1891. He settled in Breslau and established his own art school. Laboschin was well known for his architectural and landscape work, and much in demand as a portrait painter. He was the art supervisor for the Breslau newspaper for twenty years. Laboschin, age 61, died in 1929 in Breslau.

Harry Ehrenberg, born 1892, lived in Breslau, Germany, with his wife Edith nee Weindriner, born 1895, and their children Gerda, born in 1923, and Klaus Richard, born circa 1925. Harry, a veteran of World War I (1914-1918), ran a shoe store, Schuhhaus Magnet, in a working class neighborhood. In January 1933, Hitler was appointed Chancellor of Germany and persecution of the Jewish population became government policy. In 1935, Harry arrived at his store and saw swastikas scrawled on the window. The shop had been broken into, and the stock destroyed. He relocated his family to a smaller apartment in another neighborhood, hoping it would be safer. He and Edith began discussing leaving Germany. Harry had family in the United States, including his youngest brother Arno, and Edith had a brother, Rudy, in Australia. Jews were not allowed to take much currency or valuables out of the country. Harry hid valuables in his cross-country ski boots and went on a skiing trip across the border. He gave the money to a friend who sent it to friends in the US. Harry was unable to pass the physical required for a US visa because of his high blood pressure. The family took a train to Aachen, and on September 3, 1937, boarded a train for Paris where they booked passage to Cuba on a ship leaving from Marseilles. They were in Havana for several weeks, waiting for US visas, but on October 29, 1937, they arrived in Miami. They eventually settled in Queens, New York, where Harry opened a shoe repair business. Edith's mother joined Rudy in Australia, but other relatives who remained in Germany perished during the Holocaust.

Legal Status
Permanent Collection
Provenance
The print was donated to the United States Holocaust Memorial Museum in 2013 by Annette Sacks.
Funding Note
The cataloging of this artifact has been supported by a grant from the Conference on Jewish Material Claims Against Germany.

Consists of one report card issued by the Jüdische Volksschule zu Breslau to Gerda Ehrenberg, who was born in 1925. Though the report card is dated May 31, 1937, it refers to the fall 1935 school term.