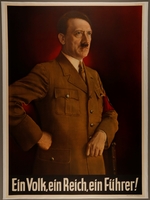 Biography
Heinrich Hoffmann (1885-1957) was a German photographer and Nazi propagandist. The son and nephew of photographers, he worked in the Hoppé studio in London before setting up in Munich as a portraitist and photojournalist. His photograph of cheering crowds on 2 August 1914 unwittingly captured the young Adolf Hitler, an event which would later benefit Hoffmann's career. Drifting to the far right after the First World War and revolutionary events in Bavaria, he joined the Nazi Party in 1920 and convinced an initially camera-shy Hitler of photography's political value. Hoffman’s assistant, Eva Braun, became Hitler’s mistress in 1930. After 1933, his virtual monopoly of Hitler photographs, as ‘the man who sees the Führer for us’, made him one of the Third Reich's major profiteers. His scenes of carefully constructed intimacy, presenting his master, especially in the regime's early years, as a clean-living, nature-loving man of the people, were massively disseminated. After 1945, though claiming to have been a mere chronicler of events, he was fined and imprisoned. His extensive photo archive survives, including photographs of German political and religious figures, as well as actors, painters, and musicians.

Antisemitic flier for the Der Stürmer newspaper showing photographic images of the “devilish grins” of Jews. The text claims that Jews are born criminals, who are incapable of laughter, and can only smile nefariously, which implies their untrustworthy nature. Two versions of the flier were published: this one with red lettering and an advertisement on the bottom, and one with black-and-white text without a bottom advertisement. The antisemitic newspaper was founded by Julius Streicher and published from 1923 to 1945. Striecher used the paper as a platform to foment public hatred of the Jewish race. The paper blamed Jews for the depression, unemployment, and inflation in Germany as well as rape and other crimes against the German people. Der Stürmer also accused Jews of "blood libel" or "Jewish ritual murder" antisemitic fabrications that were common in the Middle Ages. They claimed that Jews used Christian blood, usually from children, obtained from a torturous ritual sacrifice to perform religious ceremonies. The paper often featured crude and distasteful cartoons that showed Jewish people as ugly, with exaggerated features and misshapen bodies. The paper became very popular, eventually reaching a circulation of 800,000. After the war ended, Streicher was arrested by the US Army in May 1945. He was tried by the International Military Tribunal at Nuremberg, convicted, and executed per the ruling that his repeated publication of articles calling for the annihilation of the Jewish race were a direct indictment to murder and a crime against humanity.

Poster created by Ben Shahn for the US Office of War Information as a response to the Nazi-led annihilation and destruction of communities throughout the Czech Republic, including Lidice. It also protests the retaliatory measures taken for the attempted assassination by Czech resistance members of Reinhard Heydrich, director of the Protectorate of Bohemia and Moravia, under the Nazi occupation.