Oil painting depicting the American response to the Holocaust 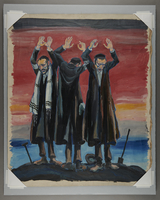 Legal Status
Permanent Collection
Provenance
The painting was donated to the United States Holocaust Memorial Museum in 1994 by Harold Shachner, a friend of William Sharp.