Adolf Hitler poses with members of his new government soon after his appointment as Chancellor. 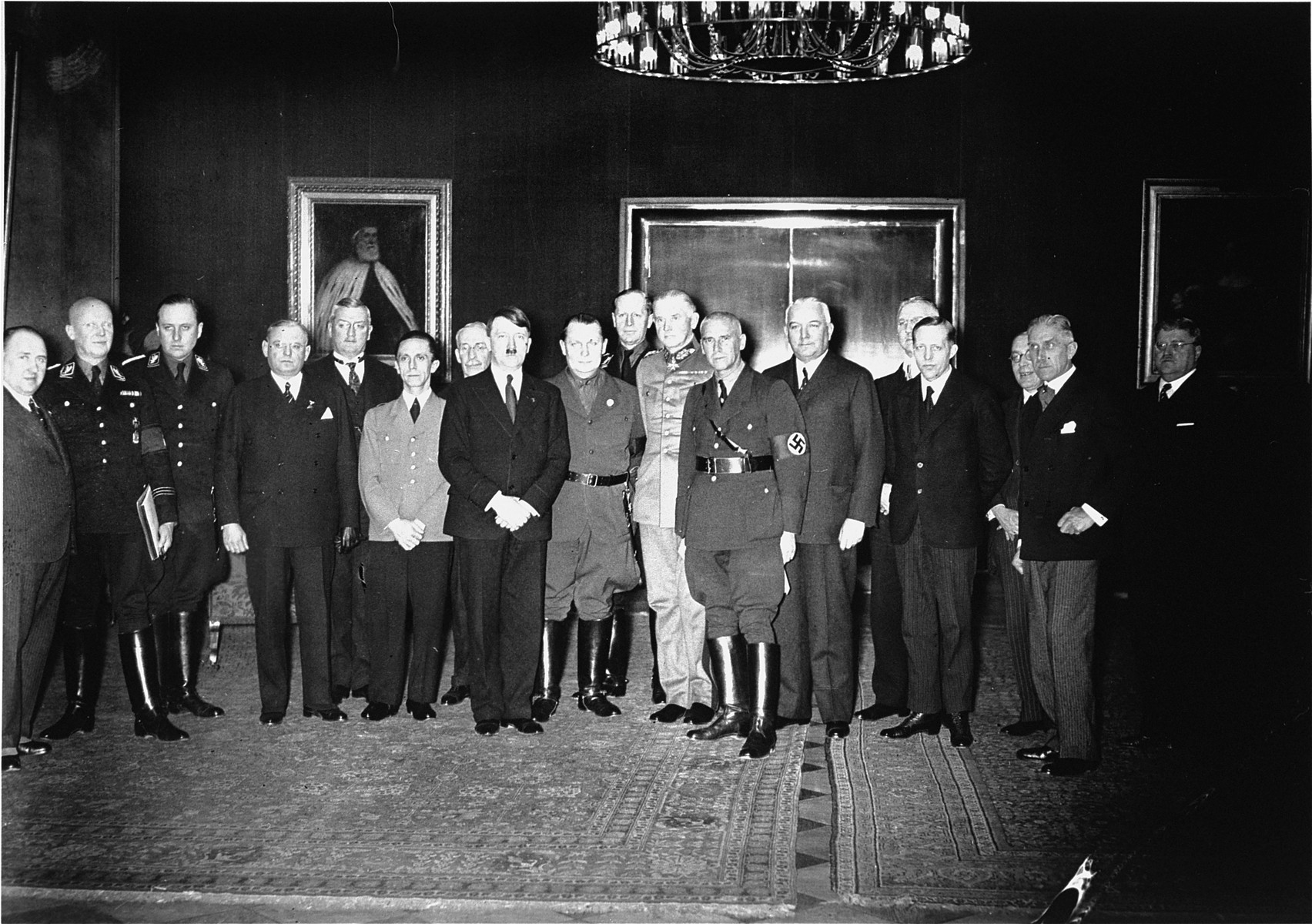 Adolf Hitler poses with members of his new government soon after his appointment as Chancellor.

Biography
Dr. Hjalmar Schacht (1877-1970), German financial expert and politician. After receiving his doctorate in economics, Schacht was employed by the Dresdner Bank, where he became deputy director in 1908. From 1916 to 1923 he served as director of the private National Bank for Germany. In November 1923 he was appointed national currency commissioner and one month later, president of the Reichsbank. In these posts he helped to stabilize the German currency. After 1924 he played a leading role in negotiations on German war reparations, but resigned in 1930 due to differences with the Weimar government. His alienation from the financial policies of the Weimar government pushed Schacht increasingly to the political right. He helped to introduce Hitler to industrial and financial leaders and played a key role in persuading President Paul von Hindenburg to appoint Hitler Reich chancellor in 1933. As a reward for his assistance, Schacht was reappointed head of the Reichsbank (1933-1939), named Minister of Economic Affairs (1935-1937), and Plenipotentiary for the War Economy (1935-1937). Schacht became the central figure in National socialist rearmament. Jurisdictional quarrels with Hermann Goering and disagreements over economic policy led to Schacht's gradual withdrawal. He remained Reich minister without portfolio until 1943. Schacht was implicated in the July 1944 plot to kill Hitler and was imprisoned for the remainder of the war. After the International Military Tribunal in Nuremberg acquitted Schacht of all charges, he was tried and sentenced by a denazification court to eight years in a work camp. He was released in 1948. Absolved of all accusations related to his activities during the Third Reich, Schacht began a successful second career in 1950 as an economic and financial consultant for developing countries.

Constantin Freiherr von Neurath (1873-1956), German foreign minister (1932-1938) and Reich Protector of Bohemia and Moravia (1939-1941). Von Neurath entered the foreign service in 1901. He served in various consular posts until 1932, when he was appointed foreign minister in Franz von Papen's cabinet. At President Hindenburg's insistence, von Neurath was retained in this position under the von Schleicher government and the Hitler regime. Because of his reluctance to pursue Hitler's aggressive foreign poilcy, von Neurath was dismissed from his post in 1938. He was named Reich Protector of Bohemia and Moravia and was responsible for dissolving the Czech parliament and political parties, abolishing freedom of the press, and instituting the Nuremberg Race Laws. In 1941 von Neurath was replaced by Reinhard Heydrich and made an SS general (Obergruppenfuehrer). At Nuremberg, he was sentenced to 15 years in prison. He was released in 1954 due to ill health and died in 1956.