Marion Kaufmann visits the Beelen family farm for the last time before her immigration to the United States. 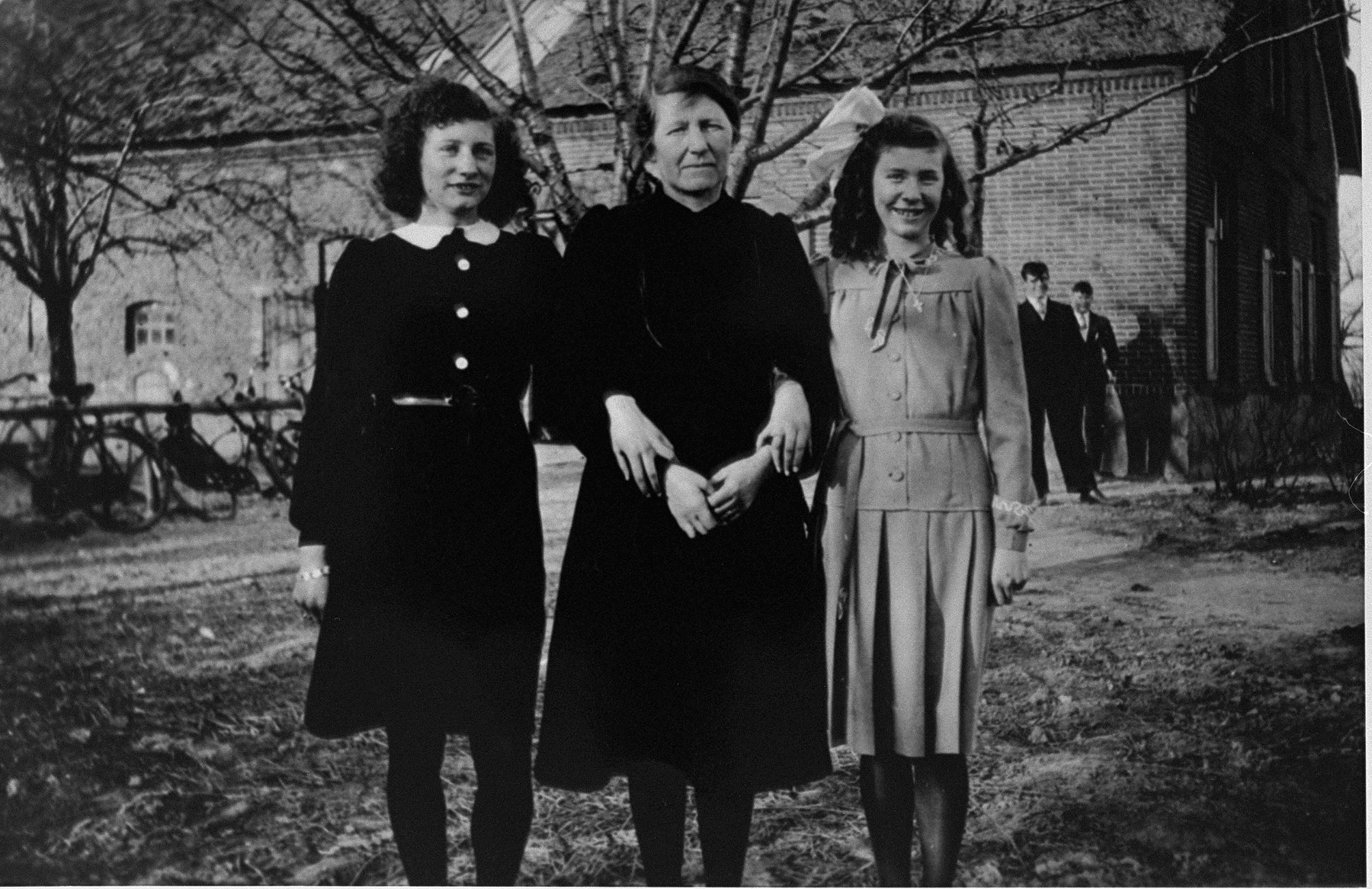 Marion Kaufmann visits the Beelen family farm for the last time before her immigration to the United States.

The Beelens hid Marion during the war. From left to right: Grada Beelen, Wilhelmina "Moeke" Beelen, and Rie Beelen.

Biography
Marion Irene Cassirer (born Marion Kaufmann) is the daughter of Lina and Walter Bruno Kaufmann. She was born on November 28, 1936 in Berlin, where her parents owned electrical repair and appliance businesses. In 1938 during the Kristallnacht pogrom, these businesses were destroyed, and the family moved to the Juedische Kinderheim. Lina helped in the kitchen, and Walter worked as the caretaker. They remained at the children's home until early 1941, when they were assigned to forced labor within the city. Lina worked for the Siemans plant making field telephones. Walter was sent to the train station where he was put to work gathering the luggage of deportees and sending it to warehouses. He also was sent to the homes of deportees to confiscate personal belongings. Because of this assignment, Walter had no illusions that the deportees would eventually come back. Walter made plans with a German to be smuggled over the border into Switzerland. However, on October 2, 1942, the day before Walter was supposed to leave, both he and the German were arrested. Walter was placed on a train, but he managed to escape. He made it to his sister's home in Trier. He and Lina had previously arranged that if they ever became separated, they would meet there. After Lina learned of Walter's arrest, she returned to their apartment and retrieved some jewelry. She then exchanged identity cards with a German friend, Emmy Erdmann, and proceeded on to Trier with Marion. Emmy was later shot for helping Jews escape. Lina and Marion could not remain in Trier, but through a Catholic priest, Lina found someone who sold her directions to the Dutch border. While on route, Lina and Marion ran into a group of German soldiers. Lina decided not to flee. Instead, she went up to the soldiers and told them that she was on her way to meet her husband who was in the army and needed directions. They accepted her story and once out of their range of vision, she and Marion continued to the border. When they arrived in Arnhem, they discovered that it was under German control. Lina then contacted a Catholic priest who put her in touch Max and Ans Knapp. Ans was a doctor and Max an attorney who worked for the Jewish community. At the Amsterdam Jewish Community Center, Marion was separated from her mother. The Knapps placed Marion with the leaders of an Amsterdam underground cell, Boy and Mia Edgar in October 1942. Every six weeks, Mia took Marion to a friend who bleached her hair with peroxide. In March 1943, while en route to the friend's home, the police stopped Mia and asked her why she was with a Jewish child. They released Mia but arrested Marion and took her to the creche, a short-term holding cell for Jewish children before their deportation. The police did not want to deport Marion without her parents and kept her until they could determine her real name and the whereabouts of her parents. She did not disclose any information and remained in the creche for over a month. After six weeks, the Edgars with the help of the underground and a cooperative German soldier successfully smuggled Marion (now known as Renie) out of the creche. Mia brought Marion to the train station, and Boy accompanied her to a convent. Marion stayed with the nuns for two weeks and then was brought to a farm owned by Jan and Wilhelmina Beelen. The Beelens had three older boys, and two younger girls, Rie and Grada, who became close friends of Marion. Marion remained there until her liberation by the Canadians in September 1944. However, after the Battle of Arnhem, the Germans reoccupied the area a few weeks later. The Beelens therefore arranged for Marion to be hidden with a Romani family until the area was liberated a second time in October 1944. Following the liberation, Marion remained with the Beelen family until December 1945, when she was reunited with her mother through the International Red Cross. Lina had been hidden first in a windowless room in Amsterdam, and then, after this hiding place was discovered by Germans, she spent a year and a half hiding in a haystack. Marion returned to Amsterdam with her mother. Lina worked as a housekeeper, and Marion attended the Rosh Pina Hebrew Day School. On February 9, 1949, Lina and Marion immigrated to the United States with the assistance of HIAS.