Dr. Otto Wolken receives flowers from a group of nuns, probably before testifying at the Frankfurt Auschwitz trial. 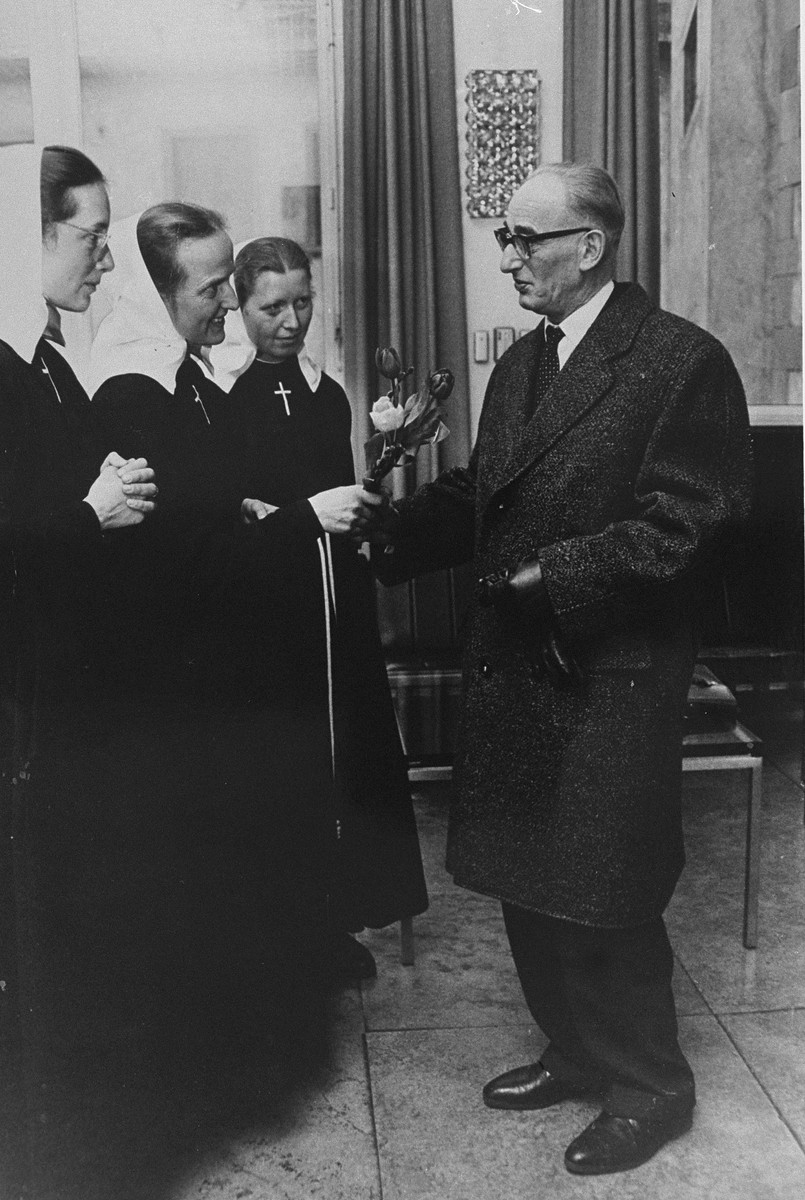 Dr. Otto Wolken receives flowers from a group of nuns, probably before testifying at the Frankfurt Auschwitz trial.

The judges delivered their verdict on October 1, 1946. Agreement among three out of four judges was needed for conviction. Twelve defendants were sentenced to death, among them Joachim von Ribbentrop, Hans Frank, Alfred Rosenberg, and Julius Streicher. They were hanged, cremated in Dachau, and their ashes were dropped in the Isar River. Hermann Goering escaped the hangman's noose by committing suicide the night before. The IMT sentenced three defendants to life imprisonment and four to prison terms ranging from 10 to 20 years. It acquitted three of the defendants.
https://encyclopedia.ushmm.org/content/en/article/international-military-tribunal-at-nuremberg.
Biography
Romana Marin (born Romana Schreier) and her mother survived the war in hiding. After Romana's mother purchased false papers they moved to Warsaw, where Romana lived under the name of Romana Maria Pomajla. After the war, they settled temporarily in Lodz before moving to Vienna. While in Vienna, Romana attended a convent school. She did not discover she was Jewish until she immigrated to Canada in 1951.
Otto Wolken, a Jewish physician, was born in Vienna on April 27, 1903. Deported to Auschwitz, Dr. Wolken managed to survive because he was a physician whose skills were in demand by the Germans. Dr. Wolken worked in various sections of the camp including the hospital and the quarantine section. He remained there until the camp was liberated by the Soviets in early 1945. Dr. Wolken stayed at Auschwitz for a few weeks immediately after liberation during which time he wrote down a chronicle of what he had witnessed for use in later war crimes trials. His chronicle was first used in Krakow in June 1945 by the investigative judge of the Main Crimes Commission. He became the first witness to testify at the International Military Tribunal in Nuremberg and testified for two full hours about prisoner daily life and German atrocities in Auschwitz-Birkenau.