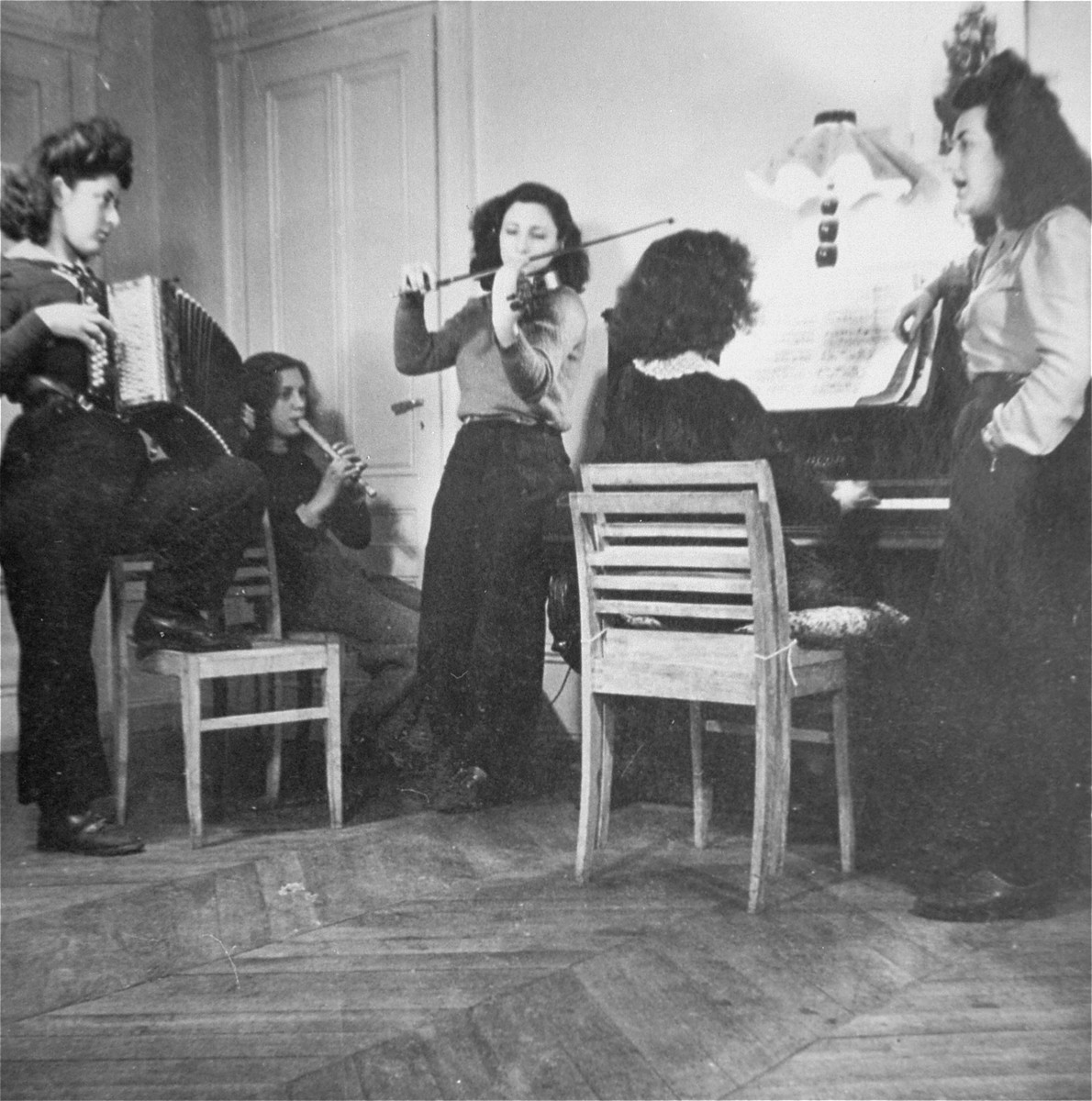 Among those pictured is Paulette Knopp (left, playing the accordian).

Event History
The Abadi (Marcel) network was a rescue mission operating in Nice, France that between 1943 and 1944 saved 527 Jewish children ranging in age from newborns to teenagers. The network was organized by Moussa Abadi, a Syrian Jew from Damascus, who had been studying in France since 1928, and his French Jewish girlfriend, Odette Rosenstock. In their efforts they received support from the bishop of Nice, Monseigneur Paul Rémond, and financial backing from the American Jewish Joint Distribution Committee. Until 1940 Moussa and Odette were living in Paris, where he was a doctoral student in history at the Sorbonne, and she was a recently licensed physician. The deteriorating security situation in Paris led them to flee south to Nice. Sometime in 1942, Moussa learned from an Italian army chaplain who had just arrived from the Russian front, that the Germans were engaged in the systematic murder of Jewish communities along the Eastern front. Persuaded that a similar fate awaited Jews in France, Moussa and Odette set about to organize a rescue operation to prevent the deportation of Jewish children. Early in 1943 Moussa approached Bishop Rémond, whom he had met briefly soon after his arrival in Nice, to ask for his help in supporting a rescue mission. The bishop willing gave his support. In addition to offering office space at his official residence and securing the assistance of several clerics, Rémond named Moussa (under the alias M. Marcel) as an inspector of Catholic education, and Odette (under the alias Sylvie Delattre) a diocese social welfare representative. These titles allowed the Jewish rescuers to circulate freely in the region and gave them broad access to Catholic and secular institutions where children could be hidden. Rémond himself often joined Moussa at night to fabricate false identity cards and ration coupons. The operation ran successfully until May 1944, when Odette was arrested by the Gestapo in Nice. Though she was tortured, she did not reveal the network. After her interrogation she was deported to Auschwitz-Birkenau. Later she was transferred to Bergen-Belsen, where she was liberated. Odette was repatriated to France in June 1945. After a period of recuperation she rejoined Moussa in Nice, where later they were married. For the next three years, Moussa worked closely with the OSE, to reunite children with their parents or other surviving relatives, and to find homes for those who were left alone. He also opened a large medical dispensary for the needy of all ages. Odette found the work too emotionally draining and preceded her husband back to Paris to resume her medical career. The two died in Paris, Moussa in 1997, and Odette in 1999. Bishop Paul Rémond (since elevated to archbishop) was recognized by Yad Vashem as one of the Righteous Among the Nations in 1992.
Biography
Paulette Knopp was born in Sarreguemines, France in 1931 to parents Jacques Josef Knopp and Sara (nee Chajmowicz) Knopp. The couple had immigrated to France from Lodz, Poland in 1925. Paulette had one sister. At the start of the war, the Knopp family was first moved to Nancy, and then to Angouleme (Charente), where they stayed until about July 1942. They were rounded up and put into camps, but they managed to escape from them. At one point, they attempted to cross the border into Switzerland, but they were unsuccessful. With the help of family members in the Resistance, they eventually moved to Nice. During the round-ups of September 1943, Paulette and her older sister were hidden through the Marcel Network, but her parents were caught and deported on Convy Npo. 6 to Auschwitz, where they died. After liberation, Paulette and her sister spent time in the orphanage at Tremplin, and possibly other locations, including an extended stay at the Hopital Hotel l'Diu in Paris. In 1953, Paulette emigrated to the United States with her sister and brother-in-law.