Dr. Norbert Freed, a Czech doctor of philosophy and a survivor of Dachau, examines a piece of evidence at the trial of former camp personnel and prisoners from Dachau. Prosecuting attorney Lt. Colonel William Denson looks on. 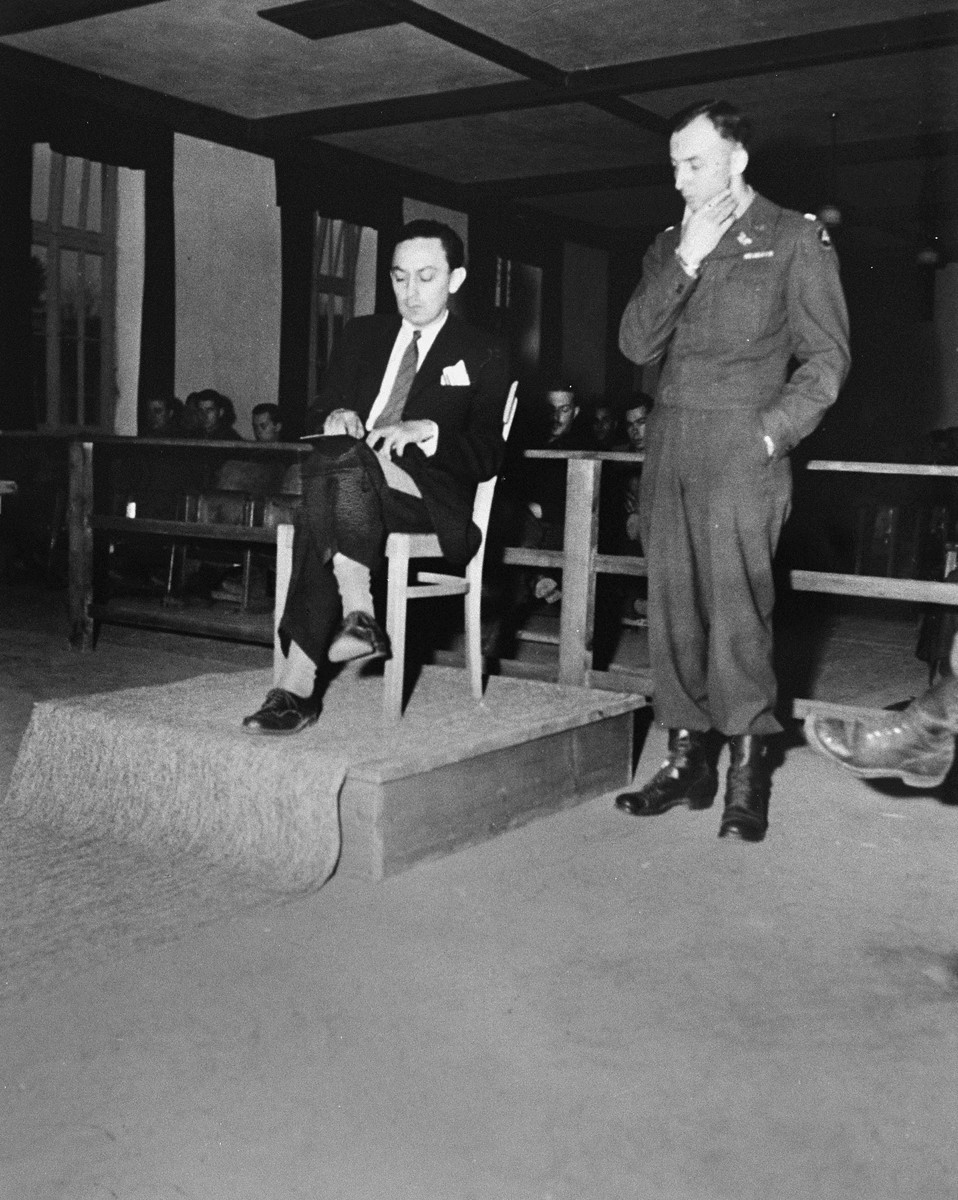 Dr. Norbert Freed, a Czech doctor of philosophy and a survivor of Dachau, examines a piece of evidence at the trial of former camp personnel and prisoners from Dachau. Prosecuting attorney Lt. Colonel William Denson looks on.

Event History
The Dachau concentration camp trial opened on November 2, 1945 in Dachau, Germany. Forty individuals who had participated in the operation of the Dachau concentration camp were charged with the murder and mistreatment of foreign nationals imprisoned there. Among those charged were Martin Gottfried Weiss, the camp commandant from 1942-1943; Dr. Klaus Karl Schilling, an SS physician who was brought to Dachau to find a method of immunizing people against malaria; and three former prisoners. The trial lasted from November 15 to December 13, 1945, with seventy witnesses called for the prosecution and fifty witnesses called for the defense. All forty defendants were found guilty, with thirty-six being sentenced to death by hanging (including Weiss and Schilling), one sentenced to hard labor for life, and three sentenced to hard labor for ten years. A few of the sentences were reduced after a review board determined the defendants were involved to a lesser degree than originally believed, but most were upheld. Those sentenced to death were hanged on May 28-29, 1946 at Dachau.
https://www.ushmm.org/wlc/en/article.php?ModuleId=10007145.
Biography
William Dowdell Denson (1913-1998), U.S. Chief Prosecutor of Nazi war crimes at the concentration camp trials of Dachau, Mauthausen, Flossenbuerg and Buchenwald, held in Dachau, Germany. Born and raised in Birmingham, Alabama, Denson came from a family that had distinguished itself both in military and judicial service. After graduating from the U.S. Military Academy at West Point in 1934, Denson attended Harvard Law School, finishing in 1937. He then returned to Birmingham, where he started a private law practice. In 1942 Denson was invited back to West Point to serve as both a law instructor and the Assistant Staff Judge Advocate to the Superintendent of the U.S. Military Academy. In January 1945 Denson accepted the position of Judge Advocate General (JAG) in Europe and was assigned to Third Army headquarters in Germany. While stationed in Freising, Germany, Denson read about the liberation of Dachau in the army newspaper, Stars and Stripes. After taking part in more than 90 trials against Germans who had committed atrocities against downed American pilots, Denson was promoted to lieutenant colonel, and in August 1945 was called to serve as the Chief Prosecutor for the U.S. government at the Dachau concentration camp war crimes trial. As a result of his success in handling the trial, he was asked to serve as chief prosecutor for a series of concentration camp trials, including Mauthausen, Flossenbuerg, and Buchenwald. When these trials came to an end in early 1947, Denson returned to Birmingham, but soon moved to Washington, DC, to accept a position as co-chief legal counsel to the Atomic Energy Commission. In 1949 Denson married Countess Constance von Francken-Sierstorpff of Southampton, Long Island, with whom he had three children. In 1958 the family relocated to New York, where Denson went to work for a major law firm. Later, in 1980 he became senior litigator in a small firm in Mineola, N.Y. Denson remained in New York until his death at the age of 85.