Marc Jarblum addresses a crowd of DPs at a demonstration protesting the forced return of the Exodus 1947 passengers to Europe. 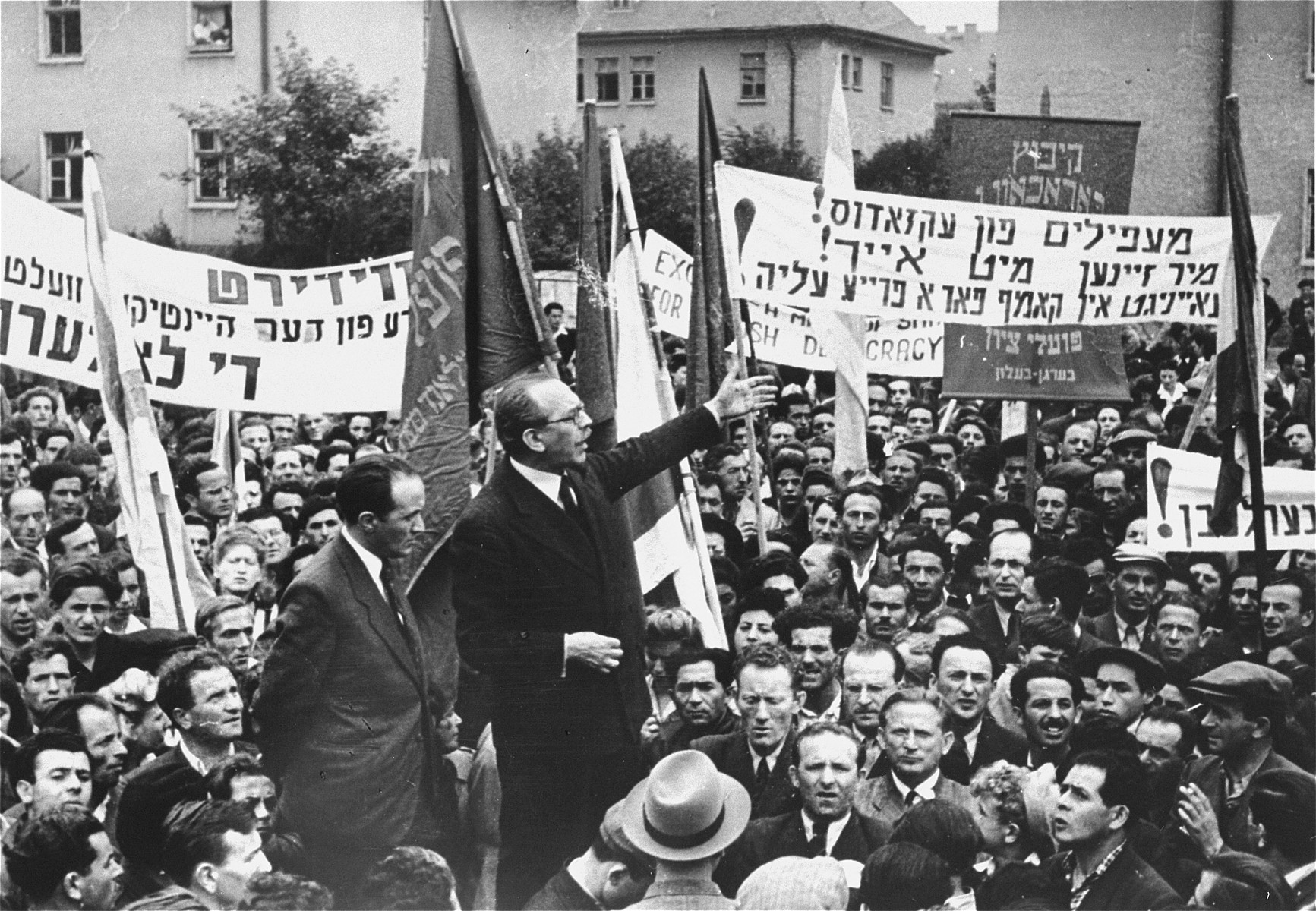 Marc Jarblum addresses a crowd of DPs at a demonstration protesting the forced return of the Exodus 1947 passengers to Europe.

The Yiddish text of the banner on the right reads: "Illegal immigrants from the Exodus we are with you! United in the struggle for unrestricted immigration!"
Josef Rosensaft stands next to the speaker. Also pictured are Berel Laufer, Norbert Wollheim, and Max Silbernik.

Josef Rosensaft (1911-1975) was the son of Menachem Mendel and Devora (Szpiro) Rosensaft. He was born and raised in Bedzin, Poland, where his father, a trained accountant, worked in the family's scrap metal business. Josef had four older siblings: Chava, Rachel, Mari-Mindl and Itzhak. His mother died in a flu epidemic when he was eight or nine. During his youth and early adulthood, Josef was active in the labor Zionist movement. After he finished school he joined his father in the scrap metal business. Josef remained in Bedzin during the first four years of the German occupation of Poland. On June 22, 1943 he was put on a deportation transport to Auschwitz, but managed to escape by diving out of the train into the Vistula River. Though wounded by German bullets during his escape, Josef made it back to Bedzin the following morning. A few weeks later during the final liquidation of the ghetto, his father died in his arms of natural causes. Josef then fled to the nearby town of Zawierce to escape the deportations. However, that same month he was again rounded-up and sent to Auschwitz-Birkenau. Josef spent five months in the camp before being transferred to the Auschwitz sub-camp of Lagisza Cmentarna in January 1944. That winter he escaped from the camp and returned to Bedzin, where he was hidden by a Polish friend for six weeks. He was recaptured in April and sent back to Auschwitz, where he was imprisoned in the Block 11 punishment barracks for seven months. In November Josef was transferred to the Buchenwald sub-camp of Langensalza, and from there to Dora-Mittelbau early in 1945. He was moved one last time to Bergen-Belsen in early April, where he was liberated by the British on April 15. Within days of the liberation, Josef was chosen by his fellow survivors to become chairman of the Bergen-Belsen camp committee. Later, after the convening of the First Congress of Liberated Jews in the British Zone in September 1945, he was elected chairman of the Central Jewish Committee for the British Zone of Germany. He headed both the camp committee and the central committee until the closing of the Bergen-Belsen displaced persons camp in the summer of 1950. During his years of leadership in the DP community Josef repeatedly stood up to the British in defense of the needs and political sensitivities of Jewish survivors. He demanded that the British formally recognize Jews as a separate category of displaced persons. He halted the transfer of Belsen DPs to two inferior camps established near the Dutch border. He thwarted the British attempt to change the name of the Belsen DP camp to Hohne, which would have diminished the moral and political power of the DPs living there that derived from their link to the infamous concentration camp. Finally, he repeatedly spoke out against the anti-Zionist policies of the British government and actively aided the illegal Bricha and Aliyah Bet movements that strove to get Jews out of Eastern Europe and smuggle them into Palestine. On August 18, 1946 Josef Rosensaft married Hadassah Bimko (1912-1997), a fellow Bergen-Belsen survivor from Sosnowiec, Poland, who at the time was head of the health department of the Central Jewish Committee in the British Zone. Hadassah was the daughter of Hersh Leib and Hendla Bimko, Gerer Hasidim who worked in the jewelry manufacturing business. She had a younger brother, Benjamin and a younger sister, Roszka. In the summer of 1943 Hadassah was deported to Auschwitz-Birkenau, where she spent fifteen months before being transferred to Bergen-Belsen in November 1944. While she survived, most of her relatives, including her husband, son, parents and sister, perished in Auschwitz. A dentist by training who had also studied medicine, Hadassah was recruited immediately after the liberation to organize a group of Jewish doctors and nurses in the camp to help British medical personnel treat the thousands of Belsen survivors suffering from disease and malnutrition. Hadassah also served as one of the principal prosecution witnesses at the Bergen-Belsen Trial in Lueneburg (September-November 1945). A year-and-a-half after their marriage, Hadassah gave birth to their son Menachem on May 1, 1948. With the closing of the Belsen DP camp, the Rosensafts moved to Switzerland, where they spent eight years in the town of Montreux. The family then immigrated to the United States, where Josef remained active in a variety of Jewish organizations. He served as president of the World Federation of Bergen-Belsen Survivors until his death.

[Source: "Poppendorf statt Palastina" (The Haganah Ship Exodus 1947), an online exhibition by Henrik Jan Fahlbusch et al.
Biography
Marc Jarblum (1887-1972) was a leading figure in the socialist Zionist movement in Europe. Born in Warsaw, Jarblum was one of the founders of the Poalei Zion socialist Zionist movement in Poland. In 1907 he moved to Paris, where he completed a law degree. Gradually he emerged as one of the most prominent public figures in French Jewry. Among his political accomplishments was winning over Leon Blum and the leaders of the Second International to the Zionist cause. He served as the representative of socialist Zionism at the Second International, representative of the Jewish Agency for Palestine in Paris, chairman of the Federation of Jewish Organizations in France, and head of the socialist Zionist movement. During World War II, Jarblum was involved in underground activities in the unoccupied zone of France. In 1943 he escaped to Switzerland, where he continued his efforts on behalf of the Jewish resistance. Jarblum returned to France after the war, where he played an important role in securing France's vote on the UN resolution to partition Palestine in 1947. In 1955 he immigrated to Israel. There he worked in the political department of the Histadrut.