Irmgard Huber, the former chief nurse at the Hadamar Institute, confers with counsel during a session of the Hadamar euthanasia facility trial in Wiesbaden, Germany. 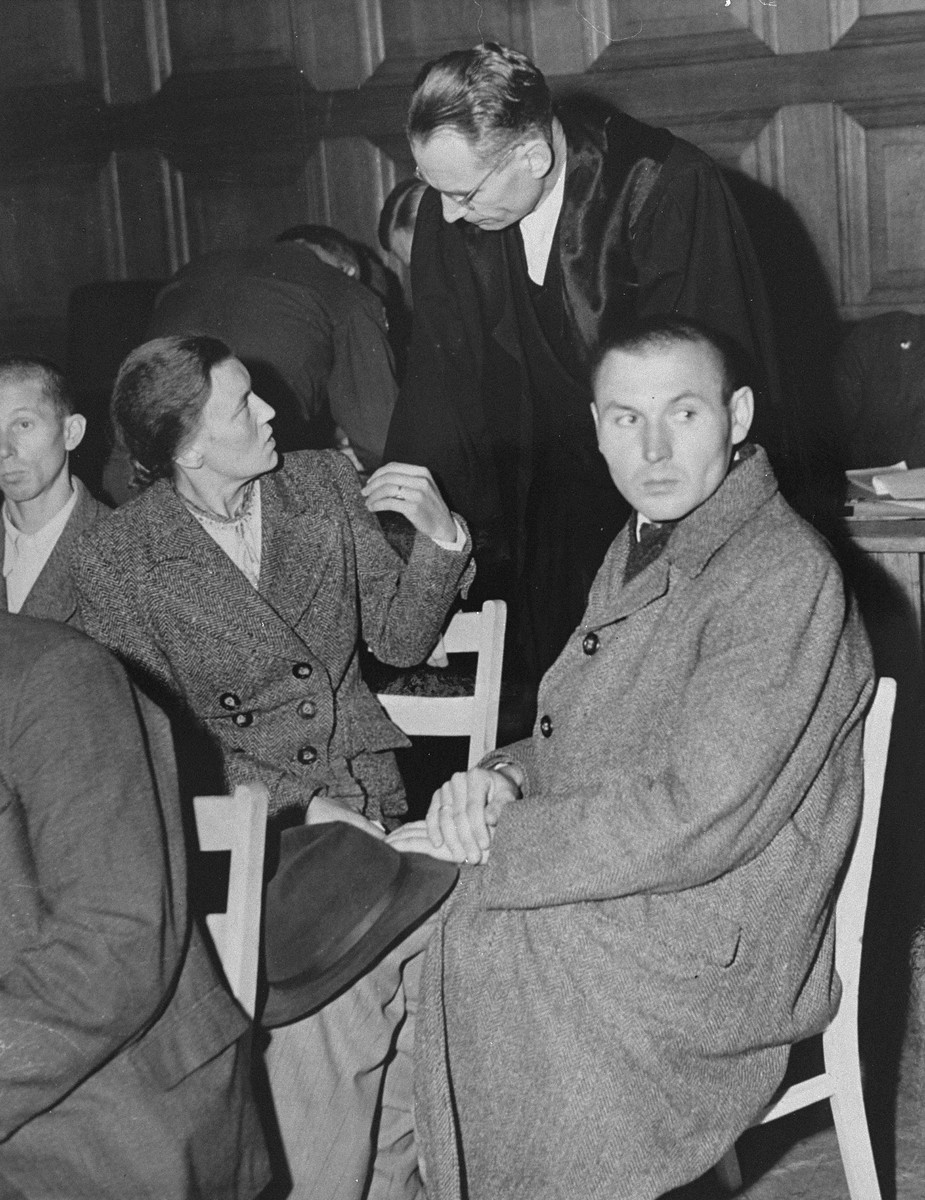 Irmgard Huber, the former chief nurse at the Hadamar Institute, confers with counsel during a session of the Hadamar euthanasia facility trial in Wiesbaden, Germany.

Pictured on the right is Alfons Klein, the former director of the Institute.

There were two main postwar trials that addressed the crimes committed at the Hadamar euthanasia facility near Limburg an der Lahn: the 1945 Wiesbaden trial and the 1947 Frankfurt am Main trial. The first, the case of "The U.S. v. Alfons Kelin, et al.," was tried by Judge Advocate Leon Jaworski before a military commission at the district court in Wiesbaden. The trial, which ran from October 8-15, 1945, sought to determine the culpability of seven Hadamar employees in the deaths of 476 Polish and Russian forced laborers that occurred between July 1, 1944 and April 1, 1945. Though close to 15,000 German nationals were killed at the Institute between 1941 and 1945, the American military commission did not have jurisdiction over crimes committed by Germans against other Germans. The seven defendants were: (1) Alfons Klein, Hadamar director; (2) Dr. Adolf Wahlmann, chief physician; (3) Heinrich Ruoff, chief male nurse; (4) Karl Willig, assistant male nurse; (5) Adolf Merkle, bookkeeper; (6) Irmgard Huber, chief female nurse; and (7) Philipp Blum, doorman, switchboard operator, and cemetery caretaker. All seven were found guilty. Klein, Ruoff and Willig were sentenced to death and hanged on March 14, 1946 in the Bruchsal prison near Karlsruhe. Wahlmann was sentenced to life imprisonment, and Merkle, Huber and Blum were given prison terms ranging between 25 and 35 years. The second Hadamar trial before the Frankfurt Criminal Division 4, took place February 24-March 21, 1947. In this case 25 defendants were indicted for the murder or accessory to murder of 10,000 German nationals at the Hadamar Institute. Only 11 of the 25 accused were convicted. The two main defendants, Dr. Adolf Wahlmann (chief physician) and Hans Bodo Gorgass (gassing physician) received death sentences that were later commuted to life imprisonment. The third named defendant Irmgard Huber (chief female nurse) received an eight-year prison term, while the others received sentences ranging from two to five years. None of the surviving Hadamar offenders served their full sentences. The last was released from prison in1958.