Rabbi Judah Nadich, chief Jewish chaplain for the American army in Europe, delivers a speech to French civilians and Jewish soldiers at the rue de la Victoire synagogue in Paris. 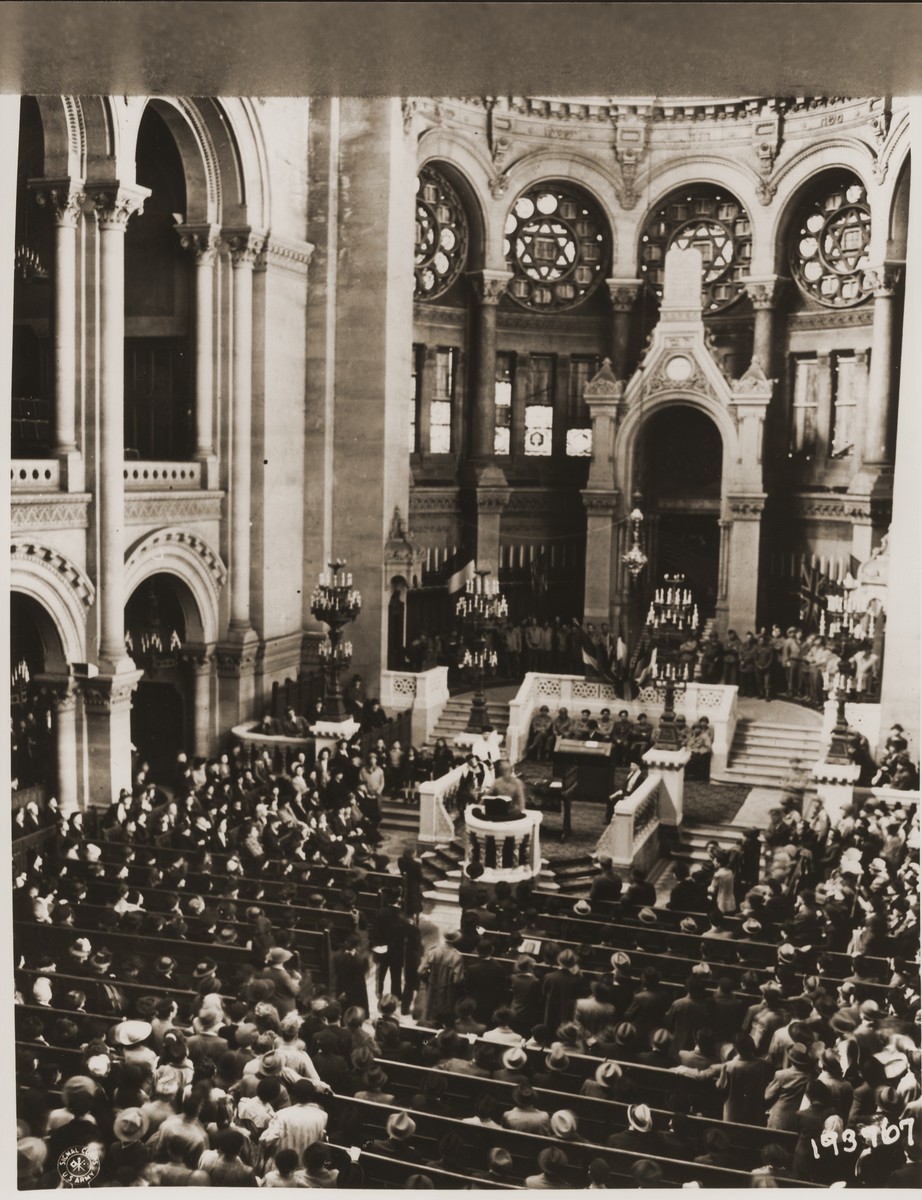 Rabbi Judah Nadich, chief Jewish chaplain for the American army in Europe, delivers a speech to French civilians and Jewish soldiers at the rue de la Victoire synagogue in Paris.

https://www.ushmm.org/wlc/en/article.php?ModuleId=10005367.
Biography
Judah Nadich (1912-2007), first adviser on Jewish Affairs to General Dwight Eisenhower, the commander of the US forces in Europe. Nadich was born in Baltimore, Md. on May 12, 1912. He was the son of a Jewish socialist and member of the Workmen's Circle. At the age of 14 he was awarded a scholarship to study at the Yeshiva high school in New York City. After graduating, Nadich attended a number of universities: Yeshiva College during the day, City College of New York in the evenings, and The Johns Hopkins University during the summers. Upon completion of his undergraduate studies he enrolled in the Rabbinical school of the Jewish Theological Seminary of America and in a master's program in history at Columbia University, where he studied with the renown Jewish historian, Salo Baron. In 1936 Nadich received both his rabbinical ordination and his masters degree. He later received a doctorate in Hebrew Literature at the Jewish Theological Seminary. Between 1936 and early 1942 Nadich served as an assistant rabbi in two congregations: Temple Beth David in Buffalo, New York and Anshe Emet in Chicago, Illinois. Shortly after Pearl Harbor, Nadich enlisted in the army as a chaplain. By the end of the summer 1942 he was already on his way to England as the first Jewish chaplain in the European Theater of Operations. For the next two years he was stationed in Northern Ireland and England, where he was responsible for supplying the religious needs of Jewish soldiers and officers and for training and assigning duties to new Jewish chaplains as they arrived in the United Kingdom. In 1944 Nadich was sent to France, where he was put in charge of the procurement of supplies for all religious purposes. When the Allies marched into Paris in August, Nadich followed them. Immediately upon his arrival he sought out the Jewish community, driving his chaplain's jeep into the old Jewish quarter. He was the survivors' first contact with the outside Jewish world, and their meeting was highly emotional. Nadich met with the new Jewish leadership and helped them secure their immediate goals of opening up a public kitchen, establishing a free loan society and making contact with relatives in the U.S. The American chaplain also participated in the first religious service held after the liberation at the rue de la Victoire synagogue. Nadich preached to the assembled congregation of Jewish GIs and survivors in both French and English. On Passover 1945 Nadich conducted seders for 6,000 Jewish troops in the largest night club on the Champs d'Elysee. While in Paris (and later in Germany), Nadich provided help to the Bricha organization in its efforts to move Jewish DPs to coastal ports and board them on ships to Palestine. On several occasions he was able to secure badly needed supplies to help sustain the DPs while they waited for transport to Palestine. In August 1945, after serving in France for a year, Nadich was transferred to Frankfurt. There he assumed the new post of Adviser on Jewish Affairs to the commander of US forces in Europe, which was created in the wake of the Harrison Report that condemned the army for its treatment of Jewish displaced persons. Nadich was sent by Eisenhower and his chief of staff, Walter Bedell-Smith, to visit the displaced persons camps in the American zone of Germany, report back on conditions and make recommendations for their improvement. For the next three months Nadich made repeated tours of the camps. His recommendations to move Jews into separate camps, provide better nutrition, ease restrictions on travel, remove camp fences, set up Jewish committees, and the like were generally supported by Eisenhower, but not always quickly implemented by military units working directly with the DPs. During the fall of 1945 Nadich also had occasion to tour the DP camps in Austria and meet with representatives of the Bergen-Belsen DP camp in the British zone of occupation. On October 19 Nadich accompanied Jewish Agency Executive Chairman David Ben-Gurion on a tour of the Zeilsheim DP camp, his first visit to a displaced persons camp. It was Nadich who convinced Eisenhower to grant Ben-Gurion's request to visit the American zone and meet with survivors. It was also Nadich who advised Eisenhower to permit the Jewish refugees (infiltrees) from Eastern Europe to cross into the American zone and take up residence in the Jewish DP camps when they first started to arrive in the fall of 1945. In November the post of adviser on Jewish affairs was passed on to a civilian appointed by President Truman, Judge Simon H. Rifkind, and Nadich returned to the US. For the next year and a half, he worked as a spokesperson and fundraiser for the Joint Distribution Committee and the United Jewish Appeal. He also did a four-month tour of duty in Rhodesia/South Africa raising funds for the South African Jewish War Appeal. In 1947 he married and resumed his rabbinical career. He served as the rabbi of Congregation Knesset Israel in Brookline, MA for ten years, followed by another ten years at the prestigious Park Avenue Synagogue in Manhattan. Nadich maintained his friendship with Eisenhower after his military service. The former chaplain wrote a special Rosh Hashanah message for Eisenhower's presidential campaign, gave the invocation at the Republican National Convention where he was nominated, attended his inauguration, and invited him to speak at his synagogue on the twentieth anniversary of the liberation of Europe in 1965.