Jewish musicians and actors in the Feldafing displaced persons camp pose beneath a Yiddish banner that reads: "The blood of the victims of fascism calls for vigilance." 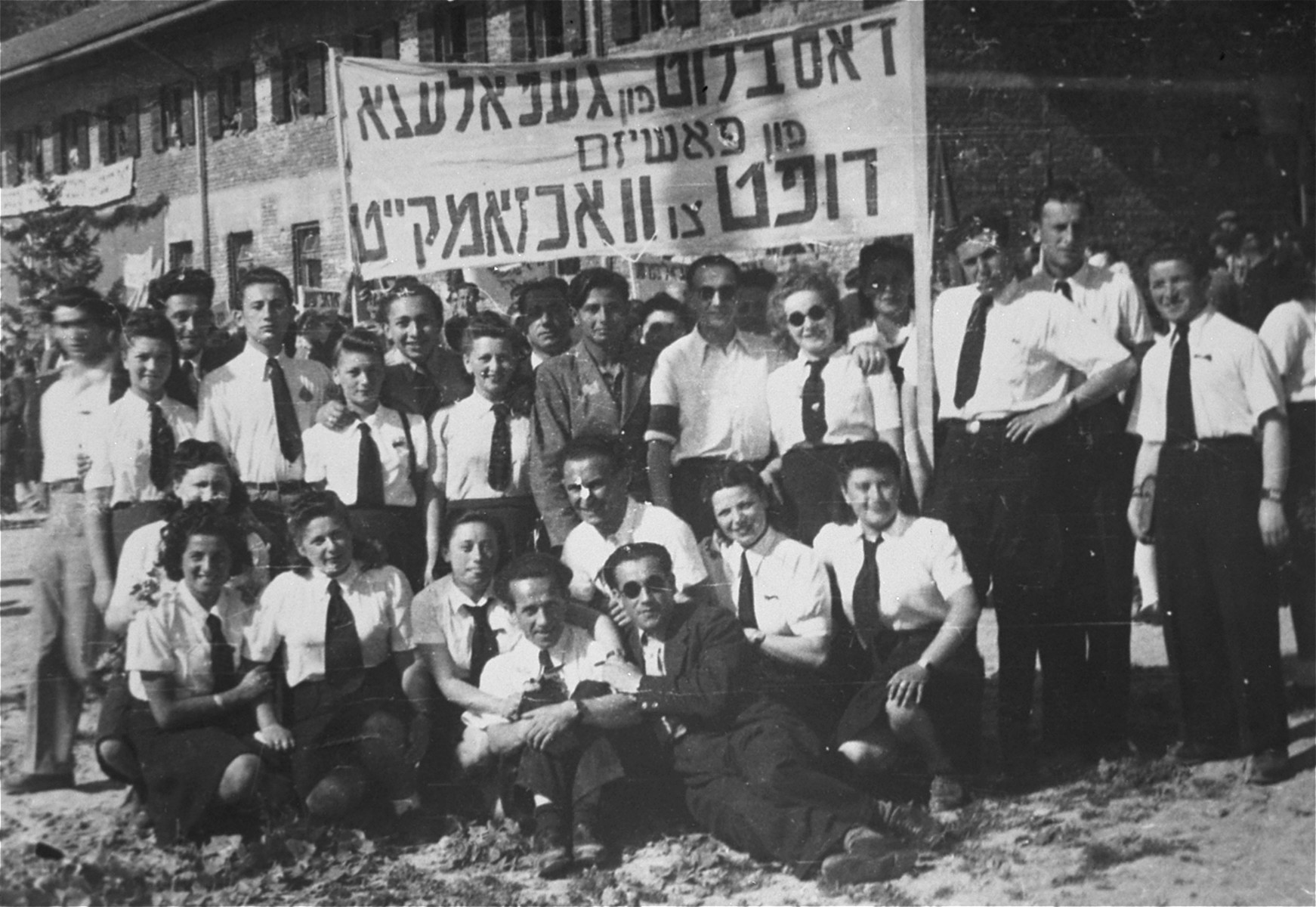 Jewish musicians and actors in the Feldafing displaced persons camp pose beneath a Yiddish banner that reads: "The blood of the victims of fascism calls for vigilance."

Among those pictured is Leybl Fingerhut (front row in sunglasses).

Biography
Aryeh-Leyb (Leybl) Fingerhut (the donor's father) is the son of Zecharia and Raifka Fingerhut from Novo Svenciani, Lithuania. His father worked as a Yiddish teacher and his mother as an herbalist. Leybl had five siblings: Joseph, David, Chaya, Luba and another brother who was killed as a young child. After fleeing to the Ukraine during WWI, the family returned to Lithuania. Leybl, whose mother had since passed away, went to live with his older, married brother, Joseph, in Siauliai. Leybl supported himself as a watchmaker but on the side, collected Yiddish folklore for the YIVO Institute of Jewish Research. Soon after the German invasion of Lithuania in June 1941, most of the Fingerhut family was murdered in the mass shootings conducted by the Germans and their Lithuanian collaborators. Leybl was spared because he was a watchmaker, and Joseph because he ran a shoemaking business. In August 1941 the Jews of Siauliai were herded into a ghetto. Joseph owned one of the larger houses in the town, which was requisitioned in part by the Germans. The Fingerhut family was relegated to the upstairs, where they lived with three other families. Joseph's wife, Miriam, was compelled to cook and clean for the German soldiers living on the ground floor. For the next three years Leybl and Joseph, and Joseph's sons, Getzl and Eliyahu, worked in various labor brigades in and around the ghetto. In June 1944 when the Siauliai ghetto was liquidated, Leybl, Joseph and his family were deported to Stutthof. Miriam was subsequently transferred to another camp in Poland, where she perished. The others remained in Stutthof for six weeks before being sent to Utting (Lager 10), a subcamp of Dachau. There, Leybl was elected by his fellow prisoners to be head of the barracks. He worked to ensure the fair distribution of food rations and to protect weaker prisoners by having stronger ones assist them in their tasks. In April 1945 when the Germans evacuated the camp, Leybl and his family were put on a forced march in the direction of the Tyrol Mountains. They were liberated shortly thereafter. After the war Leybl, Joseph, Eliyahu and Getzl settled in the Feldafing displaced persons camp. Leybl organized a choir, which toured other camps, and joined the theater troop "Amcha". He subsequently married Chana Warszawksa, who was also a singer and actress. In 1949 they immigrated to the United States.
Chana Dina Leah Warszawska (the donor's mother) is the daughter of Rabbi Nechemiah and Reyzl (Weinstein) Warszawski. She was born in Lodz, where her father was a Jewish scholar and a Gerer Hasid. Chana had five younger siblings: Emanuel, Moshe, Szlamek, Naomi, and Esther. In 1940 the family was relocated to the Lodz ghetto, where Chana got a job in a corset factory. She was subsequently made foreman of the factory that employed 100 women. At night she cooked at a soup kitchen in order to bring home extra food for her family. After Chana contracted tuberculosis, her mother took over her position in the soup kitchen. Chanah's father died of malnutrition in 1942 at the age of 48. In August 1942, Esther and Chana heard that potatoes were being distributed in the ghetto. They went out to bring some back for the family. While they were gone, however, there was an action in the ghetto, during which their mother and siblings were rounded-up and deported to Chelmno, where they were killed. When the ghetto was liquidated in 1944, Chana and Esther were deported to Auschwitz. In November 1944 Chana was transferred to a labor camp in Berensdorf, Czechoslovakia, where she worked sewing gas masks until the camp was liberated by the Russians in May 1945. Esther was transferred from Auschwitz to Theresienstadt, where she was liberated. The two sisters were reunited after the war in Poland. Together they fled to the American zone of Germany and settled in the Feldafing displaced persons camp. Esther, who was only thirteen, was sent to England to attend school. Chana remained in Feldafing, where she got a job teaching corset-making at the ORT school. While in Feldafing she met and married Leybl Fingerhut.