Two youths working in a woodworking shop in the Kovno ghetto. 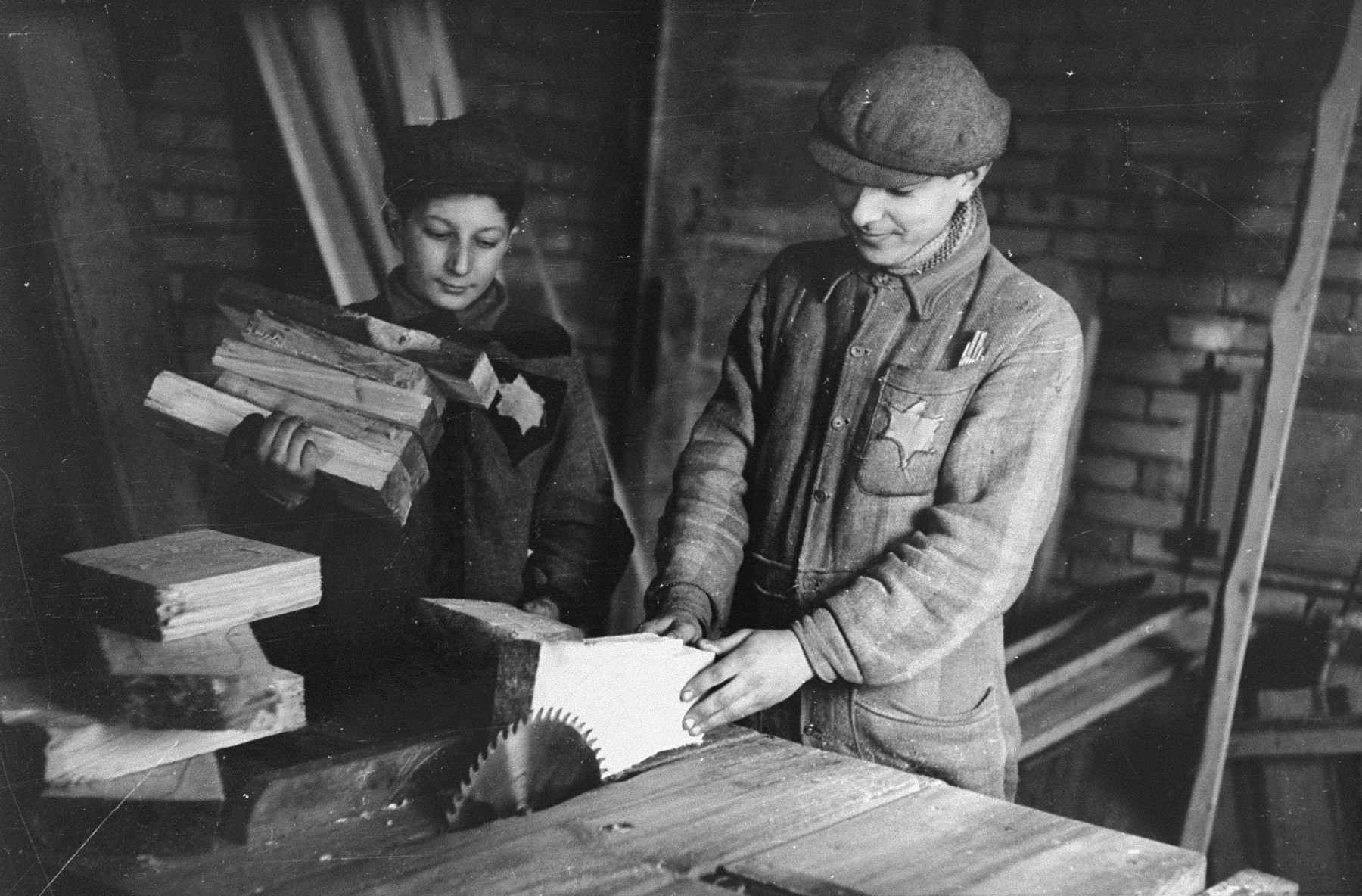 Two youths working in a woodworking shop in the Kovno ghetto.

Pictured at the left is Daniel Bursztyn, son of the Yiddish writer Michal Bursztyn.

Biography
Daniel Bursztyn (now Daniel Inbar) was born October 28, 1932 in Warsaw. He was the only child of the Yiddish novelist and teacher of history and literature, Michal Bursztyn, and his wife Rachel Perel. In the fall of 1939, soon after the German occupation of Poland, the Bursztyns fled to relatives in Moscow. Unable to find work, Michal took his family to Kovno in the winter of 1941. There he found a job with the Yiddish newspaper, Di Haynt. In the wake of the German invasion of Lithuania in the summer of 1941, the family was forced into the Kovno ghetto. Daniel worked for a time in a woodshop and in a workshop producing dolls for the Germans. He was able to escape the children's action by sneaking away from the assembly area during the round-up. Daniel and his family remained in the ghetto until its final liquidation in July 1944. All three were then deported to Stutthof, but Daniel and his father were immediately sent on to Germany. Michal Bursztyn died in Landsberg within a few days of their arrival. Daniel was then transferred to Dachau, where he stayed less than a week before his transport of 130 youngsters from Kovno was shipped to Auschwitz. Not knowing his destination, but fearing the worst, Daniel jumped off the train somewhere between Katowice and Auschwitz. For the next four weeks he hid out in the woods. He eventually found work as a farmhand in the village of Lenginy (30 km. from Auschwitz) with a farmer by the name of Josef Kostyra. After an initial trial period, he was made to feel at home. Daniel soon developed a close friendship with their daughter, Theresa, who tutored him in Polish language and in history. Daniel's rescuers did not learn of his Jewish origins until after the war, but that did not adversely affect their relationship. Kostyra, however, felt that Daniel should leave the farm to pursue his studies. Daniel did not want to go initially. He was under the impression that all the Jews in the world were gone and he had no other place to go. By February 1946, however, he made the decision to move to Lodz. Once there, Daniel contacted the editors at Di Haynt, who helped him locate his mother, who had gone to live in Moscow after her liberation from Stutthof. Within a few months Rachel arrived in Lodz, and together they fled with the Bricha to Germany. From July 1946 until July 1947 Daniel and his mother resided in the Lindenfels DP camp. Rachel worked as a teacher in the youth home where Daniel lived. In the summer of 1947 Daniel joined a transport of children from Lindenfels bound for Palestine that sailed aboard the Exodus 1947. When the passengers were deported back to Europe, Daniel sailed aboard the Empire Rival. He was relocated to the Poppendorf DP camp, but was able to sail again for Palestine the following spring.