Ernst von Weizsaecker, former State Secretary in the German Foreign Office and last German Ambassador to the Vatican, speaks with his son Richard, acting as his co-defense counsel, and Dr. Harmut Becker, Weiszacker's main counsel, during the Ministries Trial. 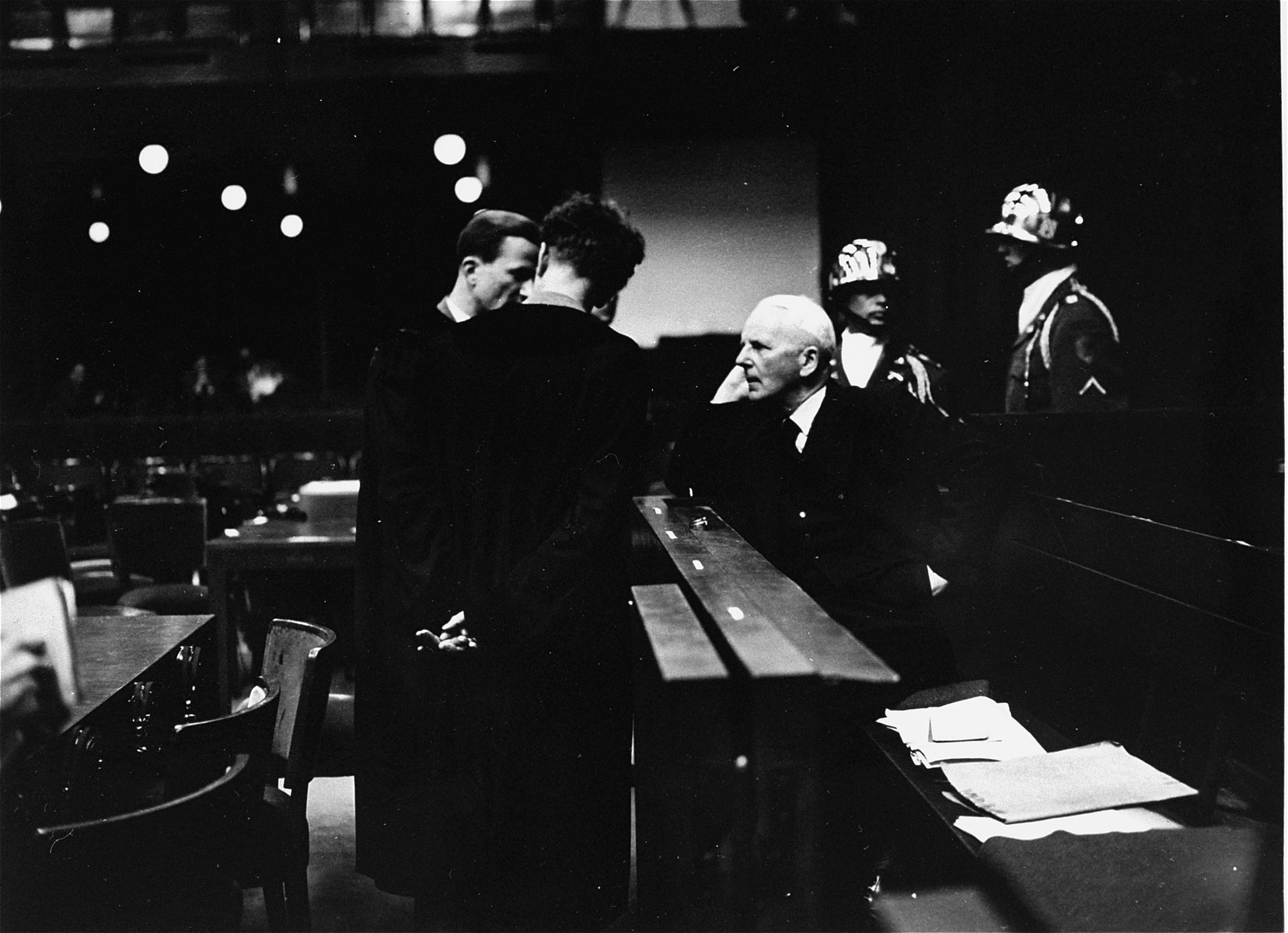 Ernst von Weizsaecker, former State Secretary in the German Foreign Office and last German Ambassador to the Vatican, speaks with his son Richard, acting as his co-defense counsel, and Dr. Harmut Becker, Weiszacker's main counsel, during the Ministries Trial.

Event History
The U.S. Military Government for Germany created the Military Tribunal IV-A on December 11, 1947 in order to try the Ministries Case, the eleventh subsequent Nuremberg proceeding. The twenty-one defendants, including three Reich Ministers, as well as state secretaries and members of the Nazi Party hierarchy, were indicted on November 18 and arraigned two days later. The indictment listed eight counts: eighteen of the defendants were charged with committing crimes against peace by participating in the planning, preparation, initiation, and waging of wars of aggression and wars in violation of international treaties; seventeen of the defendants were charged with participating in a common plan or conspiracy to commit crimes against peace; eight were charged with committing war crimes by participating in atrocities and offenses, including murder, enslavement, and ill-treatment against POWs and those at war with Germany; thirteen were charged with committing crimes against humanity by participating in atrocities and offenses, including murder, extermination, and enslavement, against German nationals on political, religious, and racial grounds; nineteen were charged with committing war crimes and crimes against humanity by participating in the atrocities and offenses listed above against German nationals and civilians of territories under German occupation; sixteen were charged with committing war crimes and crimes against humanity by participating in the plunder of public and private property, exploitation, and spoliation of countries under German occupation; fourteen were charged with war crimes and crimes against humanity by participating in the enslavement, deportation for slave labor, and ill-treatment of civilians of territories under German control, German nationals, and POWs; and finally, fourteen were charged with membership in the SS, one with membership in the SD, and four with membership in the leadership corps of the Nazi Party, all recently-declared criminal organizations. The trial ran from January 6, 1948 until November 18, making it the second longest Nuremberg proceeding after the main IMT Trial. The Tribunal returned its judgment on six of the eight counts between April 11th and 13th, 1949, having dismissed count four during the trial, ruling it was beyond their jurisdiction, and dismissing count two for lack of evidence. It acquitted two of the defendants, but found the rest guilty on at least one charge. Sentencing was announced on April 13, the convicted defendants receiving terms ranging from 4 to 25 years. One final defendant was sentenced to time served. The United States High Commissioner for Germany revised these sentences on January 31, 1951, however, reducing eight of the sentences to various shorter terms or to time served.
https://www.ushmm.org/wlc/en/article.php?ModuleId=10007069.
https://www.ushmm.org/wlc/en/article.php?ModuleId=10007070.
Biography
Ernest Freiherr von Weizsaecker (1882-1951) was a Foreign Office diplomat who served as State Secretary for the Nazis and Ambassador to the Vatican. Weizsaecker was born on May 12, 1882 in Stuttgart and served as an officer in the navy during World War I. His tenure in the Foreign Office began in 1920 as he served as Counsel in Basel (1922), embassy Councilor in Copenhagen (1922), Minister in Oslo (1931-1933), and Minister to Switzerland (1933-1936). As Ministerial Director in 1937 he then became Chief State Secretary in the Foreign Office in Berlin until 1943. Von Weizsaecker's political career continued as he became the German Ambassador to the Vatican. Arrested and charged as a war criminal, von Weizsaecker was sentenced to five years imprisonment in 1949. He published his "self-justificatory" memoirs in 1950 entitled 'Erinnerungen.' Claiming to be a Nazi resister, he could not explain his honorary SS rank or the incriminating documents containing his signature. Von Weizsaecker died in August of 1951 in Lundau am Bodensee soon after his general amnesty release.