David Ben-Gurion is offered a cigar at a meeting with other Jewish leaders in Haifa during the transfer of Exodus 1947 passengers. 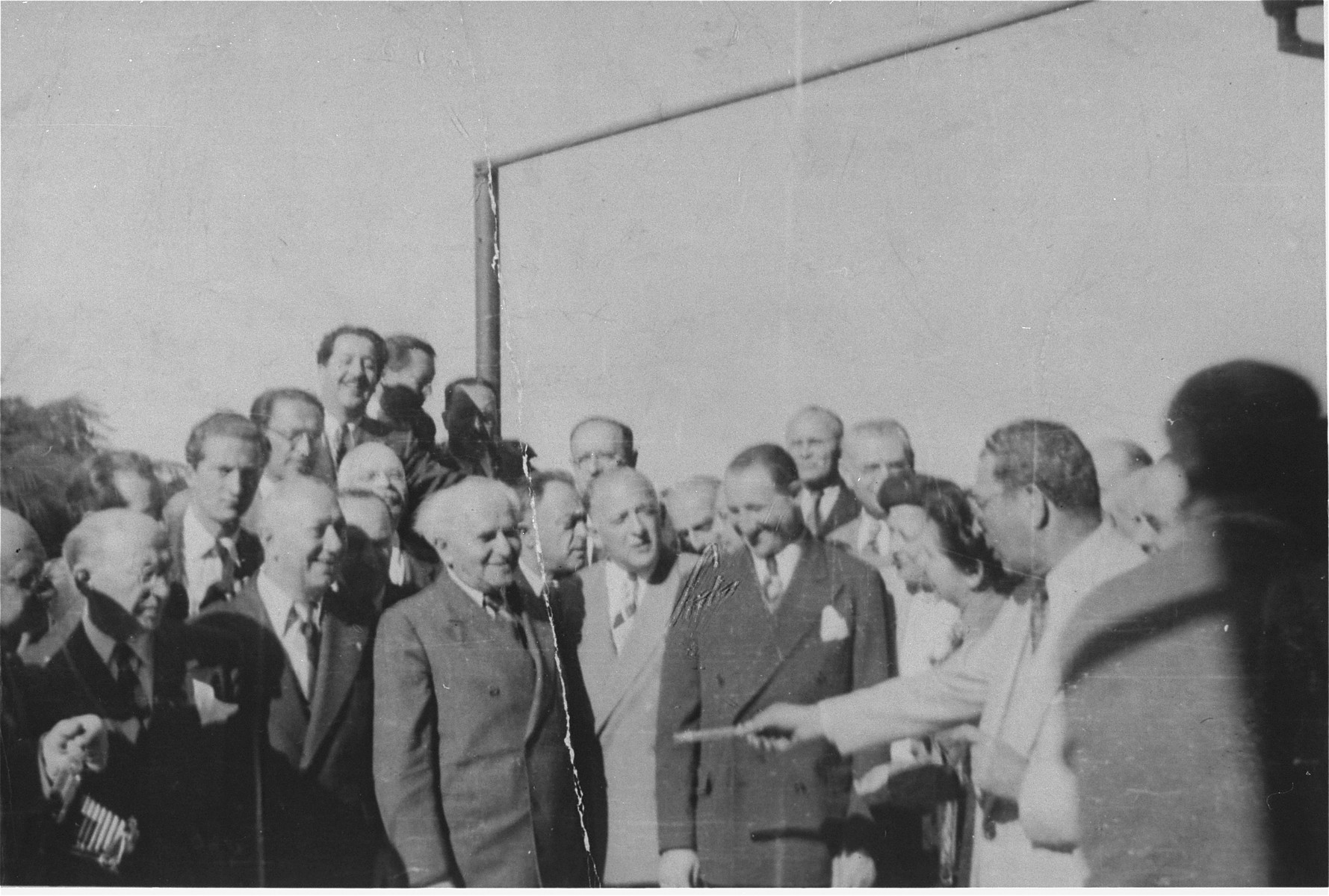 David Ben-Gurion is offered a cigar at a meeting with other Jewish leaders in Haifa during the transfer of Exodus 1947 passengers.

[Source: "Poppendorf statt Palastina" (The Haganah Ship Exodus 1947), an online exhibition by Henrik Jan Fahlbusch et al.
Biography
David Ben-Gurion (1886-1973), Zionist leader who became the first prime minister of the State of Israel. Born in Plonsk, Poland, Ben-Gurion was a Zionist from his early youth. He was educated at a Hebrew school established by his father, an ardent Zionist, and by his mid-teens, Ben-Gurion was in charge of the local Zionist youth group known as Ezra, whose members spoke only Hebrew among themselves. At the age of 18 he became a teacher in a Warsaw Jewish school and joined the Socialist-Zionist Poalei Tzion movement. He immigrated to Palestine in 1906, where he took part in the creation of the first agricultural workers' commune (which evolved into the kvutzah and finally the kibbutz), and helped establish the Jewish self-defense group, Hashomer (The Watchman). Following the outbreak of World War I he was deported by the Ottoman authorities. Ben-Gurion traveled on behalf of the Socialist-Zionist cause to New York, where he met and married Paula Monbesz, a fellow Poalei Tzion activist. He returned to Palestine in the uniform of the Jewish Legion, a new Jewish unit in the British Army. Ben-Gurion was one of the founders of the Histadrut (the General Federation of Labor) in Palestine and was its secretary-general from 1921 to 1935. In 1935 he also became chairman of the Zionist Executive and of the Jewish Agency for Palestine, holding both posts up to 1948. Ben-Gurion spent much of the first two years of World War II in the U.S., where he worked to mobilize American Jewry's support for a resolution calling for Palestine to be opened for large-scale Jewish immigration and, after the war, to become a Jewish commonwealth under Jewish authority. This resolution (the Biltmore Program) was adopted in May 1942 at a conference of American Zionists in New York. From the end of 1942, Ben-Gurion took part in organizing the Yishuv for rescue operations, but he left political action in the hands of the Jewish Agency departments. He was, on the whole, skeptical about the chances of success for rescue efforts, especially after the failure of the Bermuda Conference of April 1943 and the Joel Brand "blood for trucks" negotiations in the summer of 1944, and therefore focused on what he considered to be the long-term political solutions to the root causes of the Holocaust. In the immediate postwar period, Ben-Gurion was very influential in molding the Jewish displaced persons in Europe into a dynamic force for the Zionist cause. During his three tours of the DP camps, in October 1945, and in January and October 1946, Ben-Gurion invigorated and inspired the DPs by addressing them not as powerless victims, but as partners in a national struggle. On May 14, 1948 Ben-Gurion proclaimed the establishment of the Jewish State of Israel. He served as both prime minister and defense minister in the subsequent War of Independence. In late 1953, Ben-Gurion left the government and retired to Kibbutz Sde Boker in the Negev. He returned to political life after the Knesset elections in 1955, assuming the post of defense minister and later the premiership. In June 1963 Ben-Gurion resigned as prime minister, but remained active politically. In June 1970, Ben-Gurion retired from political life and returned to Sde Boker where he died in 1973.