Jewish deportees, carrying a few personal belongings in bundles and suitcases, march through town along the Hindenburgstrasse from the assembly center at the Platzscher Garten to the railroad station. 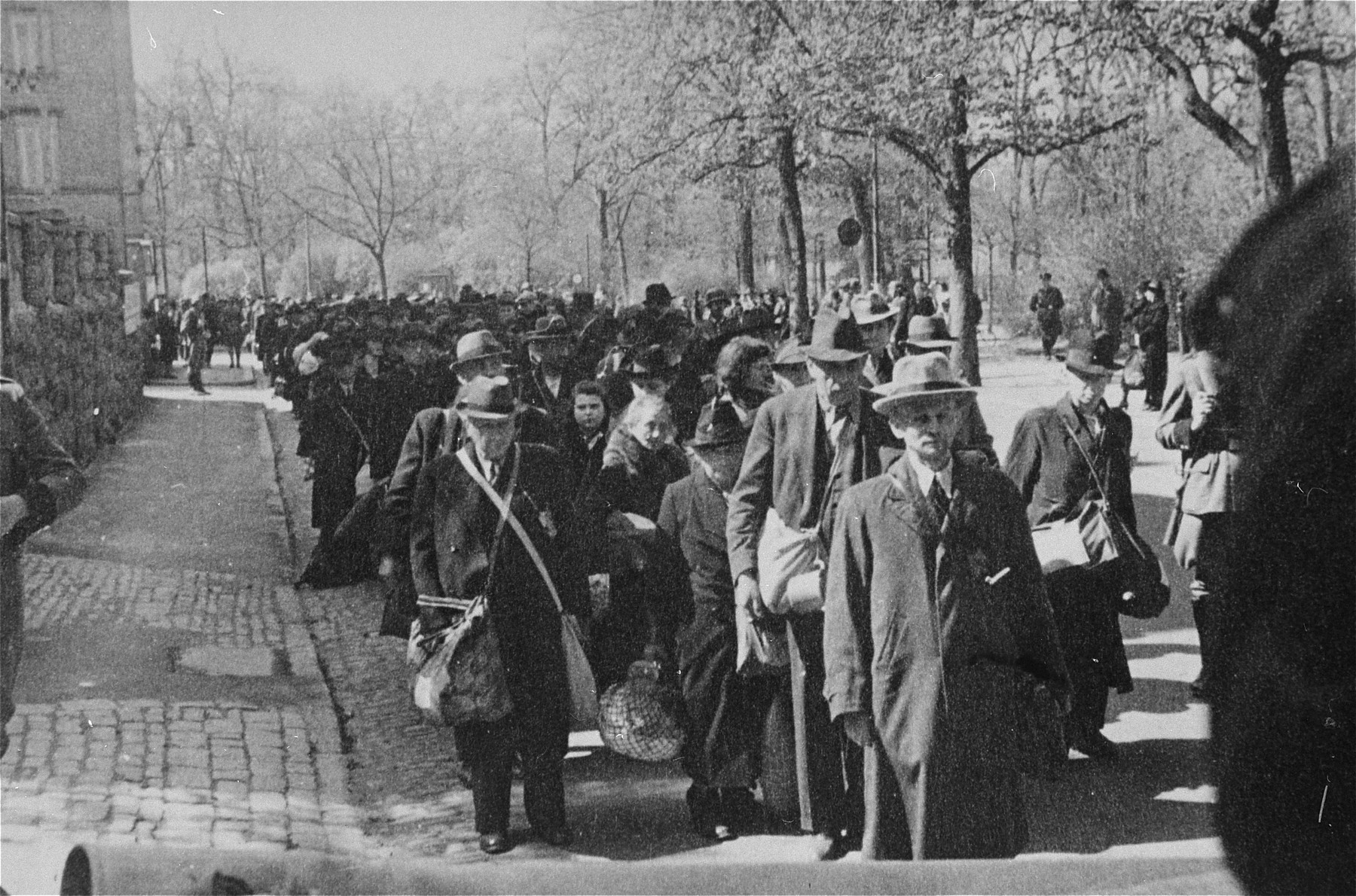 Jewish deportees, carrying a few personal belongings in bundles and suitcases, march through town along the Hindenburgstrasse from the assembly center at the Platzscher Garten to the railroad station.

Event History
One photograph from the files of the Würzburg branch of the Gestapo office in Nuremberg-Fürth. The collection, consisting of approximately 1200 files and an album of 128 photographs, describes and depicts the deportation of Mainfranken Jews from Würzburg and Kitzingen. The material was discovered in a barracks at Oberursel/Taunus by Isaac E. Wahler, who was then working in the office of Dr. Robert Kempner, American Deputy Chief of Counsel for War Crimes, Nuremberg. The files were entered into evidence at several war crimes trials, including the Ministries Trial, Case 11 of the Subsequent Nuremberg Proceedings (1947). In the 1950s the collection was given over to the German authorities. It was housed first in the office of the states attorney for the district of Nuremberg-Fürth and later (since 1984) at the Bayerische Staatsarchiv Würzburg.

The Jews of Würzburg and such other Mainfranken communities as Aschaffenburg, Schweinfurt, Kitzingen and Bad Kissingen, were rounded-up and deported to ghettos and concentration camps in the east in six transports beginning in November 1941 and ending in June 1943. Before their departure they endured a series of humiliating identity card checks and luggage and body searches at assembly centers that resulted in the confiscation of all their personal property. This was followed by a march through town to the train station under the jeering eyes of local residents. The first group of deportees, numbering 202, was rounded-up on November 26, 1941 at an assembly center established in the Würzburger Stadthalle (also known as the Schrannenhalle). From there, the Jews were taken to a camp at Nuremberg-Langwasser, where they were later boarded onto trains bound for Riga. The second transport, numbering 208 Jews, was assembled at the Fränkischen Hof hotel in Kitzingen on March 24, 1942 and was sent to Izbica near Lublin. The next three transports were assembled at the Platzschen Garten, a large banquet and dance hall in Würzburg. The third group of deportees, consisting of 650 Jews, departed one month after the second, on April 25, 1942. Its destination was also the Lublin district. The fourth transport, which left on September 10 with 177 people, and the fifth, which left on September 23 with 562 people, both went to Theresienstadt. The final transport, which departed on June 17, 1943, included 64 Jews, seven of whom were sent to Theresienstadt, and the rest dispatched directly to Auschwitz. In all 2,063 Jews from Mainfranken were deported between 1941 and 1943.