A group of Jewish teenage girls wearing armbands pose on the stairs outside a building in Bedzin. 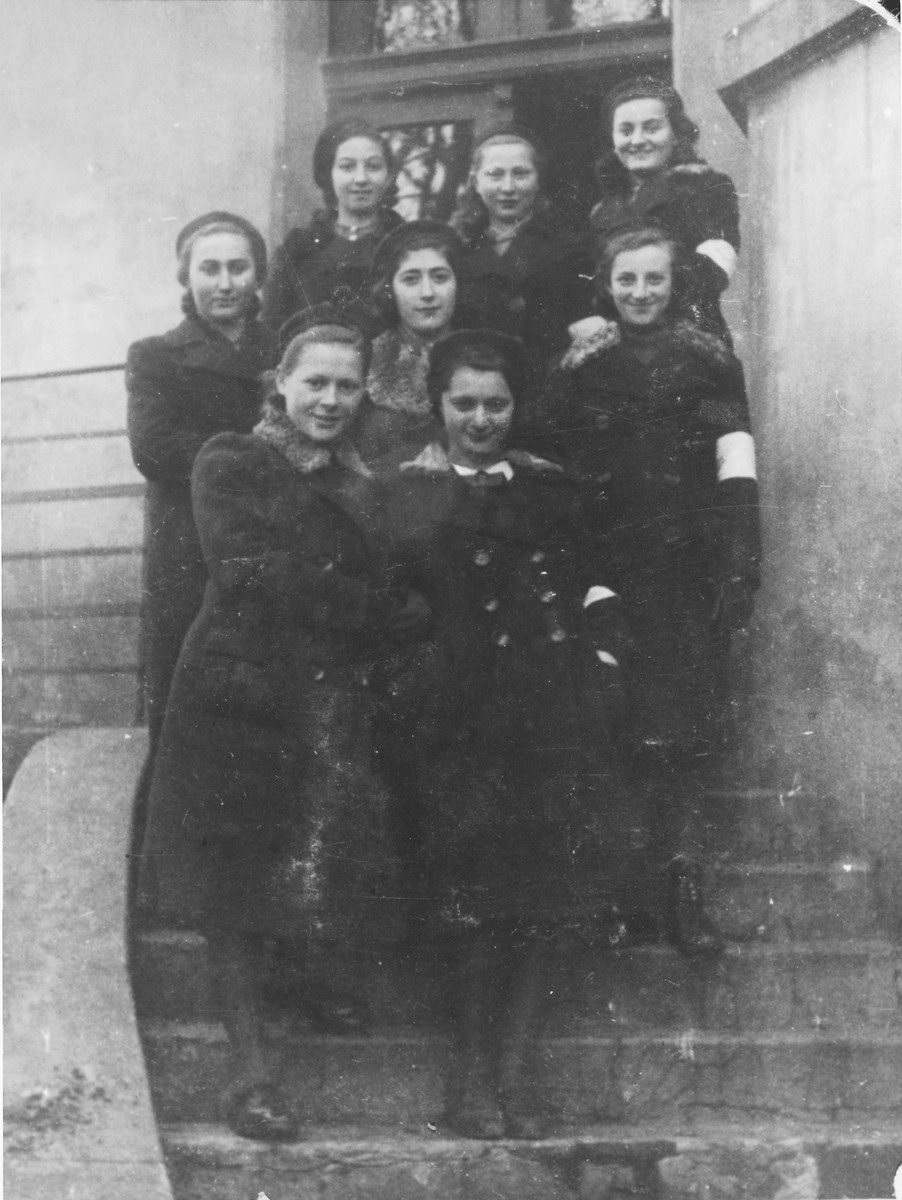 A group of Jewish teenage girls wearing armbands pose on the stairs outside a building in Bedzin.

Among those pictured is Chana Szlezyngier (front row center) and Tosia Szwajcer, the only one of the group to survive.

https://encyclopedia.ushmm.org/content/en/article/german-administration-of-poland. https://encyclopedia.ushmm.org/content/en/article/ghettos-in-poland.
Biography
Benjamin Szlezyngier is the son of Avram and Szifra (Kromolowska) Szlezyngier. He was born in 1923 in Wojkowice, Poland, where his father was a timber merchant. Benjamin had four siblings: Dawid (b. 1917); Szlamek (b. 1919); Mindla (b. 1921) and Hanusia (b. 1925). Following the German invasion, Benjamin fled with his mother and sisters to his grandparents in Radom. They stayed there for three months before returning to Wojkowice in January 1940. For the next eighteen months Benjamin remained in his home until May 1941, when the Jewish community was rounded up and subjected to a selection at the local orphanage. At this time Benjamin was relocated to the Bedzin ghetto, where he lived until March 1943. During this period he took part in the "Farma" Zionist collective that had been given a plot of land to farm between Bedzin and Sosnowiec. In March 1943 Benjamin was forced to report to the Dulag assembly center in Sosnowiec, from which he was sent to the Gleiwitz labor camp in Lower Silesia. There he rejoined his father, who had been deported two months earlier. In Gleiwitz Benjamin and his father worked in a paint factory and were able to receive food parcels from a Polish woman in Wojkowice. On January 14, 1945 both father and son were evacuated from the labor camp and sent on death march that wound its way to Oranienburg, Flossenburg, Regensburg and Dachau. Avram died on the march, and Benjamin fell ill with typhus just as the Americans liberated Dachau. After his recuperation in the Dachau hospital, Benjamin went to live in the Feldafing displaced persons camp. He was there only a few weeks before he joined the Kibbutz Buchenwald hachshara in Geringshof. In June 1946 his group left for Palestine from La Spezia, Italy aboard the illegal immigrant ship, Katriel Yaffe. The ship, however, was intercepted by the British and its passengers deported to Cyprus. Benjamin was assigned to Camp 60, one of the summer camps in Famagusta. There he married Hanka Wiernik on October 25, 1946. Three months later the couple was allowed entry into Palestine.