A survivor of the Hadamar Institute shows war crimes investigators a uniform belonging to a Polish prisoner that he has plucked from a pile of clothing removed from victims of the euthanasia killings. 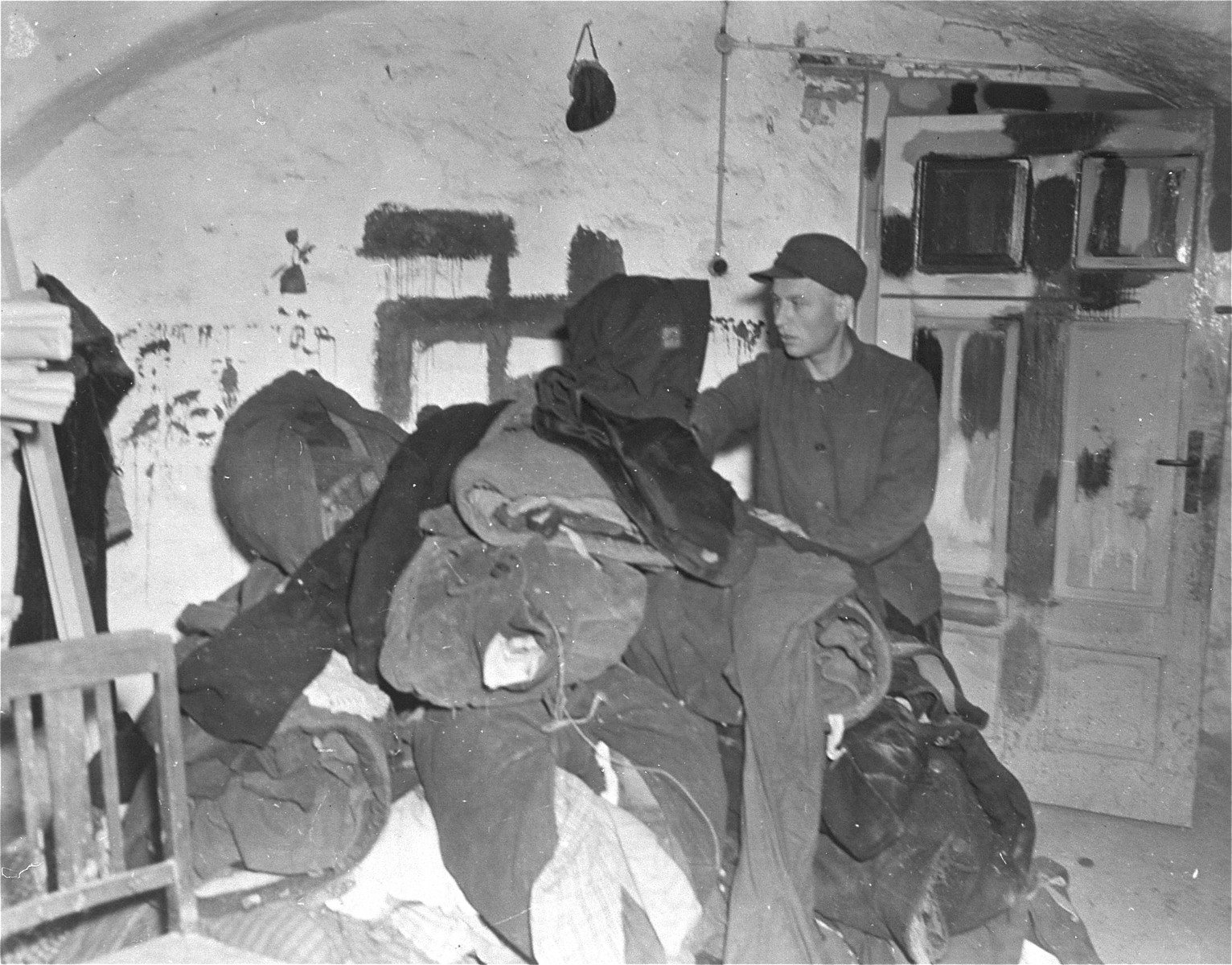 A survivor of the Hadamar Institute shows war crimes investigators a uniform belonging to a Polish prisoner that he has plucked from a pile of clothing removed from victims of the euthanasia killings.

Pictured is 30-year-old Frita Dickmann. The photograph was taken by an American military photographer soon after the liberation.

[Sources: Heberer, Patricia. "T4 and Hadamar: The Systematic Murder of German Patients as a Training School for the 'Final Solution'" (unpublished article, April 5, 2002); "Hadamar," Aktion Reinhardt Camps. http://www.deathcamps.org (22 February 2003).]
The euthanasia program was the Nazi regime's first campaign of industrialized mass murder against specific populations whom it deemed inferior and threatening to the health of the Aryan race. Code-named "Operation T4" for the Berlin street address (Tiergarten 4) of its headquarters, the euthanasia program targeted mentally and physically disabled patients, a population that the Nazis considered "life unworthy of living" (lebensunwertes Leben). The euthanasia killings began in August 1939 with the murder of disabled infants and toddlers. Headed by Philipp Bouhler, the chief of the Fuehrer's chancellery, and Karl Brandt, Hitler's personal physician, the children's euthanasia program involved the selection and transfer of children identified as disabled by physicians, nurses and midwives, to special children's wards established at more than 20 hospitals. In these medical wards health care workers killed at least 5,000 children by administering lethal doses of medication or through starvation. This program was later expanded to include older children. The next phase of the euthanasia program involved the killing of disabled adults residing in institutional settings in the Reich. To accommodate this much larger population, T4 technicians created killing centers where the disabled were murdered in gas chambers and their bodies burned in crematoria. Six killing facilites were established in 1940 at Brandenburg, Grafeneck, Hartheim, Sonnenstein, Bernburg and Hadamar. Public protests from the church and the judiciary ultimately forced Hitler to halt the gassing in August 1941. However, this did not end the euthanasia program. The killing of disabled children continued unabated, and the murder of disabled adults was restarted in August 1942, utilizing the methods of lethal overdose and starvation. Known as "wild" euthanasia, this phase of the program continued until the final days of the war. In all, "Operation T4" claimed at least 200,000 lives.