A Nazi election poster for Dr. Ernst Neumann prior to the annexation of Memel by Germany. 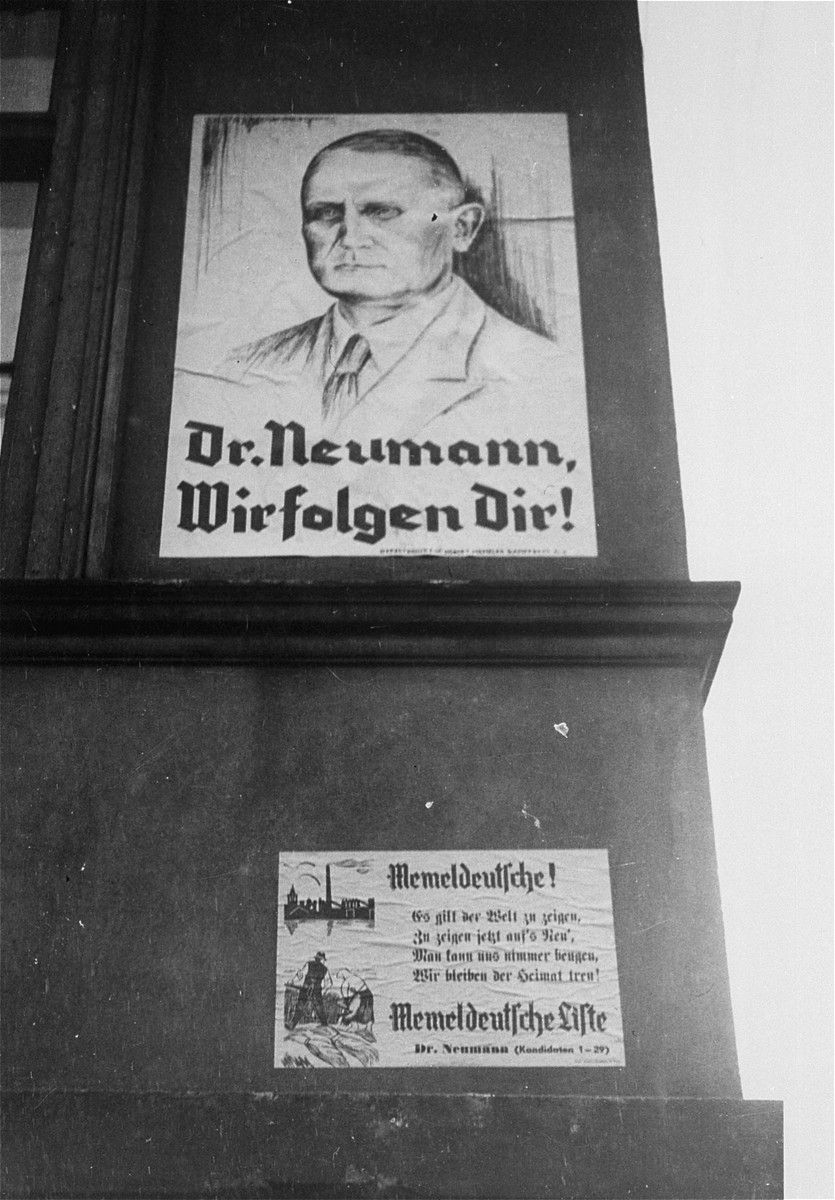 A Nazi election poster for Dr. Ernst Neumann prior to the annexation of Memel by Germany.

Event History
A part of East Prussia since the 16th century, Memel and its environs were removed from Germany in 1919 and annexed to Lithuania in 1923 as as autonomous area. However after 1933, Hitler agitated for its return to the Reich. The Nazi Party gradually seized control of local politics through the faction controlled by Dr. Ernst Neumann, and on March 22, 1939, Germany formally annexed Memel. Most of the Lithuanian and Jewish population fled the city before the German takeover.

https://www.ushmm.org/wlc/en/article.php?ModuleId=10005444. https://www.ushmm.org/wlc/en/article.php?ModuleId=10005439.
Biography
George (originally Hirsch) Birman was born in 1922 in the German city of Konigsberg and grew up near the Baltic port of Klaipeda, in Lithuania. His father, Abel Birman, gave him a Voigtlander camera as a present for his tenth birthday, which he used to document pre-war, wartime and postwar Jewish life in Europe. In 1941 Hirsch was relocated to the Kovno ghetto. From there, he was sent to a number of labor camps in the area. He managed throughout his incarceration to keep his camera and photographs with him. On the night of July 9, 1944, before escaping from the Kedainiai labor camp near Kovno, Hirsch handed over his passport, birth certificate and approximately 150 photographs and negatives to his father, who was then working as the camp cook. Abel wrapped the documents and photographs in waxed paper and buried them in a canister under the kitchen. Using a pair of pliers, Hirsch cut a hole in the barbed wire fence surrounding the camp and escaped, along with his father and another companion. The three crawled through a drainage ditch and hid in a rye field before fleeing to the forest. One month later, after the German retreat, Hirsch returned to Kedainiai and dug up his photographs, which he found undamaged. He then proceeded to photograph the former labor camp. Hirsch eventually settled in Vienna, where he studied engineering and worked for the Bricha, the underground Zionist organization that assisted Jewish DPs in migrating to the West and immigrating to Palestine. He lived off and on at the Rothschild Hospital for four years registering DPs while his father helped in the management of the camp's supplies. In 1952 Hirsch immigrated to the United States.