German and Austrian Jewish refugees, who have been detained in a Swiss labor camp, work in road construction. 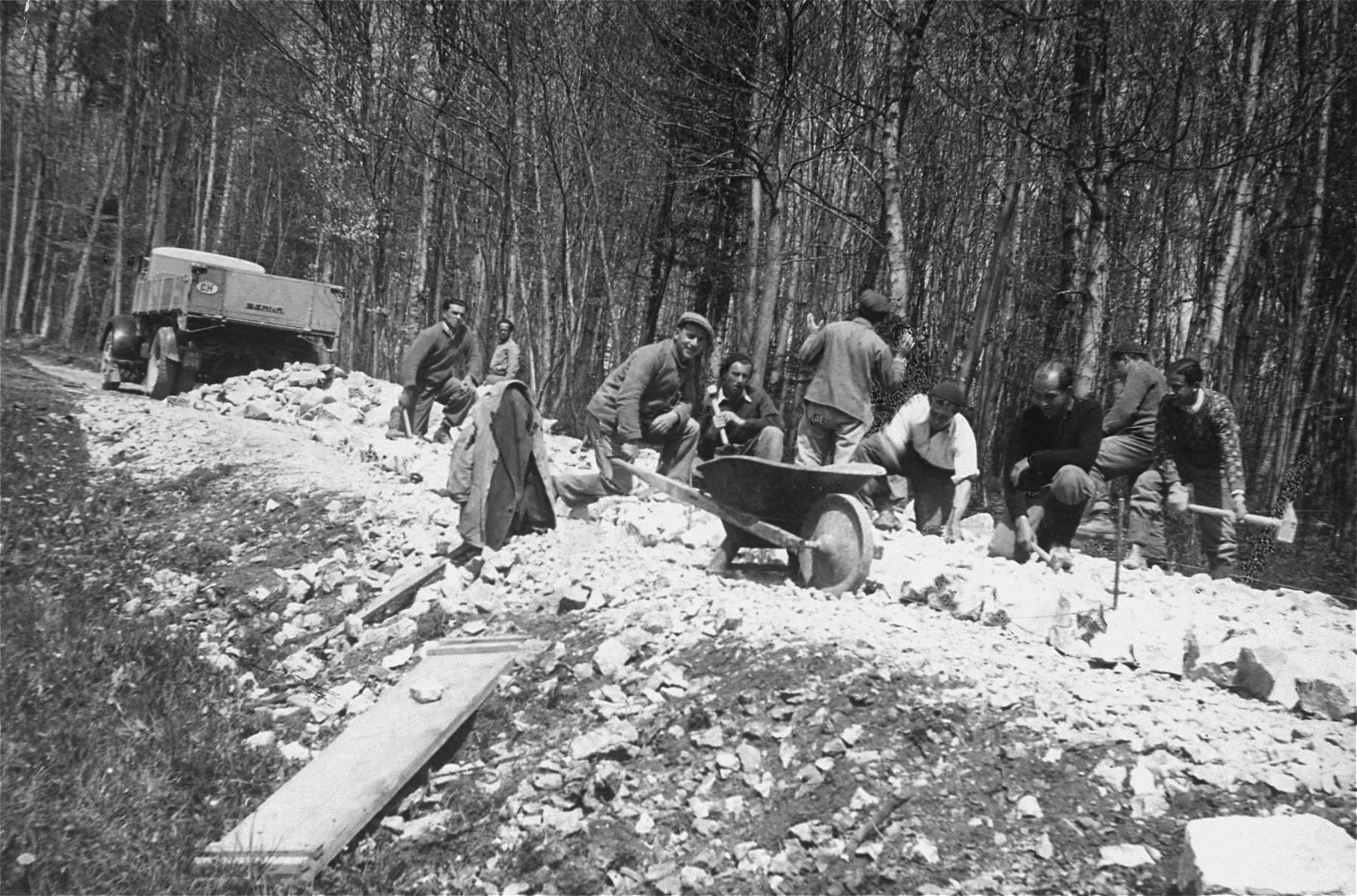 German and Austrian Jewish refugees, who have been detained in a Swiss labor camp, work in road construction.

Event History
Following the Anschluss, the Nazi takeover of Austria, thousands of central European Jews tried to enter Switzerland. This wave of emigration led Swiss authorities to adopt severe restrictions on the entry of foreigners into the country. Border police were instructed to turn back all emigrants holding German passports. "J" stamps were required on all passports held by German Jews, and visa requirements were expanded to encompass more and more nationality groups. After March 1940 Swiss authorities required most of the refugees to reside in internment camps of various sorts: collection camps, quarantine camps, reception camps, labor camps, training camps, children's homes, and internment homes for adults. Administered by the Federal Justice and Police Department, these facilities were generally poorly equipped and functioned with little regard for the needs and sensitivities of the internees. The refugees suffered from their forced idleness, lack of privacy and personal freedom, and their often arbitrary separation from family members. Male refugees assigned to labor camps were employed in road construction, farming, or public works, while females worked in sewing and laundry facilities. Young refugees between the ages of seventeen and nineteen were sent to training camps. They were assigned to civic improvement projects and farming, and attended school. While many complaints were lodged against the Swiss authorities, these voices were not heard until the last year of the war, and were not acted upon until the final two months of the conflict.
Biography
Gerhard (later Gary) Lewitzky is the son of Sigmund Lewitzky and Jetti Ebenstein Lewitzky. He was born on July 8, 1933 and his older sister, Inge, was born on September 14, 1931. The family lived in a three room, walk-up apartment in Vienna Austria, and Sigmund worked as a traveling salesman, mainly in Italy and France. The family's life changed drastically following the German annexation of Austria in March 1938. SA storm troopers arrested Sigmund's brother and sent him to Dachau and others beat up Gerhard's grandfather. Sigmund began carrying a self-addressed stamped postcard that he could drop on ground in the event of his arrest. Finally the family decided to leave, encouraged by relatives who had already immigrated to Switzerland. Though the border was already closed, the Lewitzkys made plans to cross illegally. By coincidence, they left home on November 8, just before Kristallnacht. Two days later they arrived in Hohenems where they joined three other relatives and a guide, Edmund Fleisch. After dark, Fleisch led the group of five adults and two children, ages 7 and 5, through the woods towards Switzerland. In middle of woods, he was relieved by a Swiss guide, Willi Hutter, who took them across a brook into Switzerland, circumventing the border control station. After spending the night in a small hotel in Diepoldsau, they were brought to the jail in St. Gallen. There, the police chief, Paul Grueninger, illegally filled out entry cards backdating them to when entry still was legal. In this way, Grueninger saved between two and three thousand Jewish refugees. Gruninger was fired for his illegal activities and lost his pension. In 1972 he was honored by Yad Vashem as one of the Righteous Among the Nations, but the Swiss only exonerated him in 1996.

Throughout the war, the Lewitzkys lived as "stateless emigrants" in a four-room apartment in Degersheim. Prohibited from working, they were supported by the Swiss Jewish community and the AJDC. The children were permitted to attend a Protestant parochial school, but were the victims of anti-Semitic abuse by some of their classmates. Between 1940 and 1942 Gerhard's father, Sigmund, was taken to a labor camp, where he worked in road construction. Following his release from the camp and the end of the war, the Lewitzkys applied to immigrate to the United States and finally left in November 1947.