Studio portrait of a mother and daughter in the Tarnow ghetto. 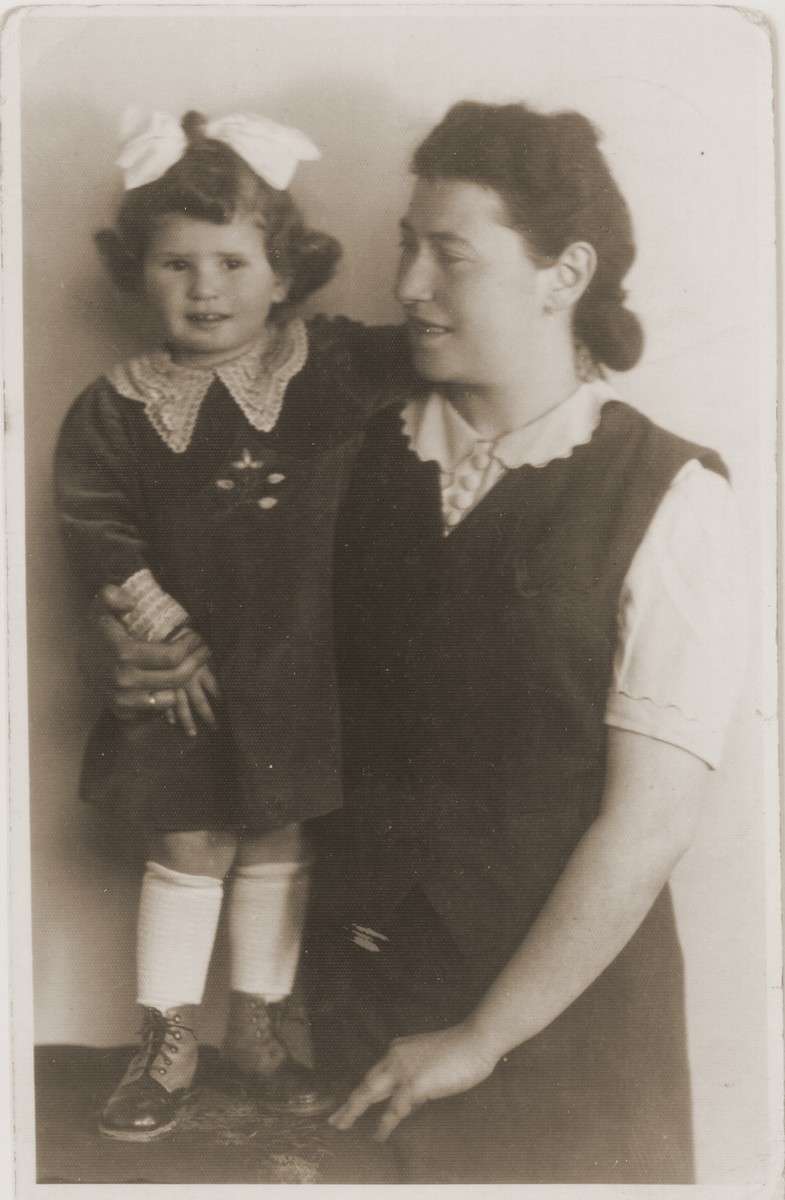 Studio portrait of a mother and daughter in the Tarnow ghetto.

Pictured are Helena (Amkraut) Lusthaus with her daughter, Elzbieta.

https://www.ushmm.org/wlc/en/article.php?ModuleId=10005461.
Biography
Elizabeth Strassburger (born Elzbieta Lusthaus) is the daughter of Edmund (b. 8/2/1899) and Helena (Amkraut, b. 6/8/11) Lusthaus. She was born May 15, 1938 in Krakow, Poland and grew up in the town of Iwonicz. Elzbieta's father, who was born in Brzozow and attended medical school at the Jan Kazimierz University in Lvov, practiced medicine in Iwonicz. Her mother, who was born in Przemysl, worked as an assistant pharmacist. In September 1939 Edmund enlisted into the Polish army as an army physician, but before he was able to report for duty, the country was conquered. At the time of the invasion, Edmund was visiting his parents in Stryj. Near the end of September Stryj came under Soviet administration and Edmund was deported to a labor camp in Assino in Siberia. Left alone, Helena and her baby daughter went to Tarnow in November 1939 to live with Helena's mother, Sophie (Lieberman) Schiff. Helena's father, Isak Amkraut, was divorced from Sophie and lived in The Netherlands, where he owned a diamond cutting business. In the initial stages of the war, Isak was able to support Helena by sending her food and diamonds. In 1941, Helena, Elzbieta and Sophie were forced to move to the Tarnow ghetto. Helena was assigned work outside the ghetto in a German uniform workshop. This gave her an opportunity to buy false identification papers for Elzbieta and herself. In June 1942, some 3,500 Jews, including Sophie, were deported to the Belzec killing center. A few days after the action, Helena and Elzbieta fled Tarnow using the false identities of Maria and Barbara Stachura. They settled in Milanowek, where they lived with Kazimierz and Genowefa Bandyrowa and their two daughters, Wisia amd Hanka. After the destruction of the Warsaw ghetto, German authorities intensified their efforts to find Jews in hiding. Helena worried that they would be discovered and sometimes kept her daughter from school or hid her in the basement. They both survived and were liberated by the Soviets in January 1945. After the war, they learned that the house in which they had been hidden was in fact a safehouse for the Polish underground. In May, 1945 Helena bribed a Russian soldier to smuggle them in shipping crates across the border into Czechoslovakia. From there, the two went to Austria and stayed for a short time at the Rothschild Hospital in Vienna before moving to a DP camp for orphans in Munich. During a medical inspection of the camp officials informed Helena that her husband was alive and stationed in Italy. Edmund, upon hearing that his wife and daughter were alive, immediately sent an ambulance to pick them up and bring them to Ancona, Italy. In 1946 they moved to England, where they lived in Bedlington (Northumberland) until their immigration to the United States in May, 1951.