Postcard from Rajzla Cudzanowska, aunt of the donor, Helen Luksenburg. This postcard was sent on March 4, 1942 from Sosnowiec to Rajzl's daughter and sister in the Gruenberg labor camp. 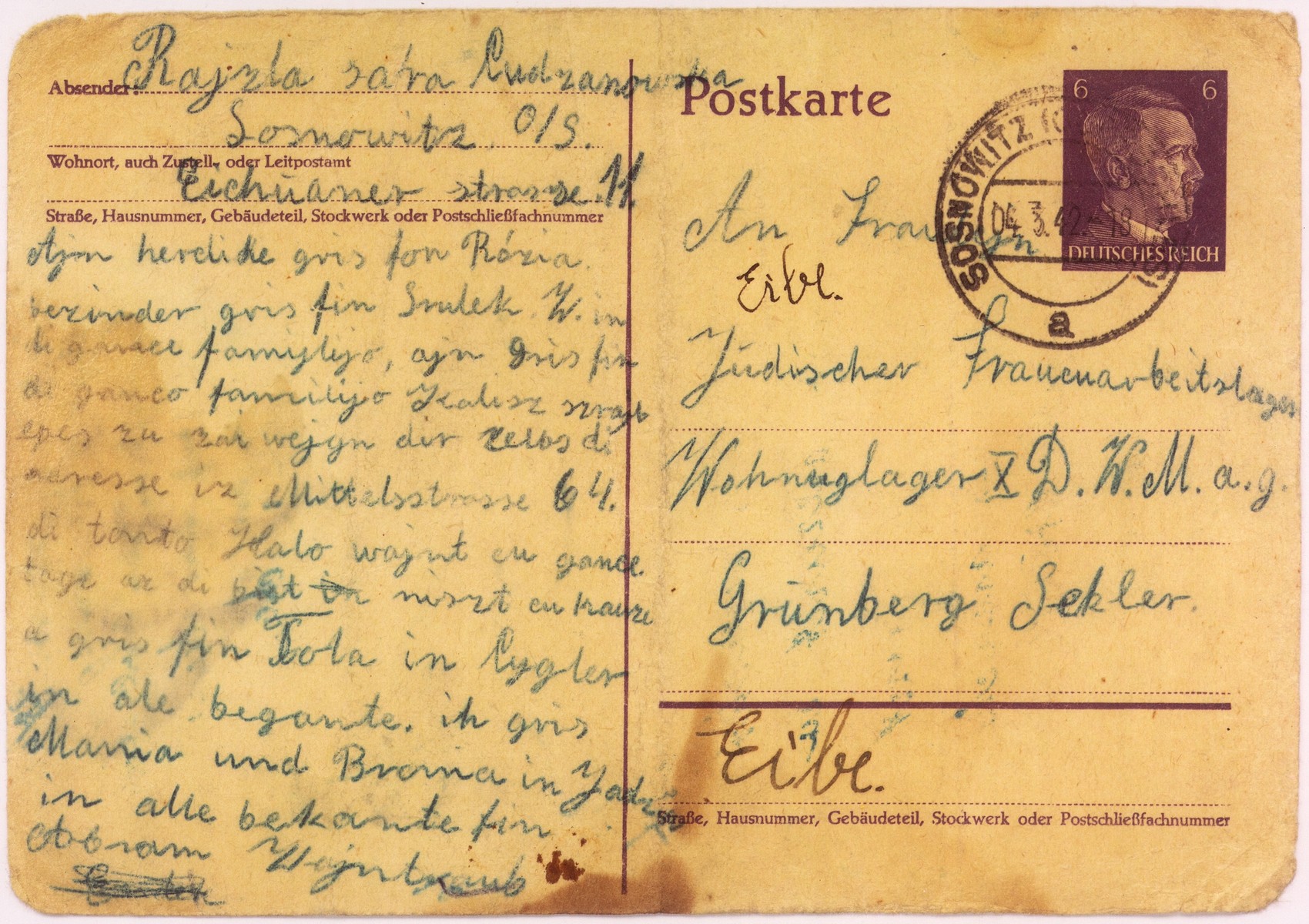 Postcard from Rajzla Cudzanowska, aunt of the donor, Helen Luksenburg. This postcard was sent on March 4, 1942 from Sosnowiec to Rajzl's daughter and sister in the Gruenberg labor camp.

Event History
Bedzin, Sosnowiec, and Dabrowa Gornicza are three neighboring towns located in the Zaglebie district in southwest Poland. On the eve of World War II, Bedzin and Sosnowiec supported Jewish communities of approximately 28,000 each, while Dabrowa had 5,000. The Germans occupied the towns on September 4, 1939. Five days later they set fire to the Great Synagogue in Bedzin. The flames quickly spread and engulfed fifty adjacent houses. Physical attacks were accompanied by repressive economic legislation which forced the Jewish population to relinquish their businesses and personal property. In the first days of the occupation, separate Jewish Councils were appointed in Bedzin and Sosnowiec, but early in 1940 the Bedzin council was subordinated to the Zentrale der Juedischen Aeltestenraete (Central Office of the Jewish Councils of Elders in Upper Silesia), established in Sosnowiec and headed by the increasingly autocratic Moshe Merin. This council represented some forty-five communities in the area and operated its own Jewish police force.
During 1940-41 the situation in Bedzin, Sosnowiec and Dabrowa was considered somewhat better than elsewhere in occupied Poland. There, the Jews resided in open ghettos and their lives retained a semblance of normalcy. As a result, thousands of Jews from central Poland sought refuge there. In addition to this influx, several thousand Jews from the district were forcibly resettled in Bedzin and Sosnowiec at this time, among them the Jews from Oswiecim, who arrived in the spring of 1941 prior to the opening of Auschwitz-Birkenau. The Sosnowiec Jewish Council was responsible for drawing up lists of local Jews to be sent to forced labor camps in Germany and Eastern Upper Silesia established under the Organisation Schmelt program. Jews selected for forced labor had to report to the local transit camp, known as the "Dulag." Failure to comply resulted in their arrest and the withdrawal of their family's ration cards. Transports to labor camps began in 1940 but were greatly expanded in the spring of 1941, after Himmler decided to use labor from the Organisation Schmelt camps for constructing large factories to support German war production. The Jewish Council was also involved in establishing German-owned workshops which employed Jews. The largest of these was the Rosner Fabrik, a network of workshops which produced military uniforms and other goods and services for the German army. From a workshop employing a few dozen people, it grew into a factory complex with three thousand workers. Those fortunate enough to get positions in these enterprises were exempt (for the time being) from deportation to labor camps. Unlike the typical German overseer, Rosner treated his employees with respect and fought to protect them. He even warned them of impending actions. The Rosner Fabrik remained in operation until Rosner's arrest and execution in January 1944. When the schools were closed the local Zionist youth organizations took over the task of instructing the children. They also engaged in agricultural training on small plots on the outskirts of town. In Bedzin the local Zionist youth were allocated a hundred acre plot which was known as the "Farma" and became a focus of youth activity. The first round of deportations to death camps occurred in May 1942, when 1500 Jews were sent to Auschwitz. The following month another 2,000 were deported. Then, on August 12, all the remaining Jews in the three towns were ordered to report to the soccer field in Sosnowiec, ostensibly to have their papers revalidated. Instead, a large selection ensued resulting in the deportation of 8,000 to Auschwitz. The youth movements under the leadership of Hashomer Hatzair activist Zvi Dunski, conducted a campaign urging their fellow Jews not to report for the deportations. They also began to organize underground resistance units. The "Farma" became the headquarters of the Jewish underground and was the site of clandestine meetings with Mordechai Anielewicz, Arie Wilner and other leaders of the Jewish Fighting Organization in the Warsaw Ghetto. The underground concentrated its efforts on acquiring weapons and constructing bunkers in preparation for a revolt. But opinions were divided between those who favored resistance in the ghetto and those who stressed the search for escape routes out of the ghetto. In the spring of 1943, the remaining Jews in Bedzin were confined to a ghetto set up in Kamionka, while those remaining in Dabrowa and Sosnowiec were concentrated in Srodula. The two sites bordered on one another and operated as a single ghetto. On August 1, 1943 the final liquidation of the ghetto began. Zionist youth offered armed resistance in several bunkers which hampered the Germans and forced them to spend almost two weeks clearing the ghetto. Some one thousand Jews remained after the liquidation. Most were settled in the Sosnowiec labor camp, established on the site of the Srodula ghetto. These Jews labored in workshops as tailors, cobblers and carpenters. The camp was finally liquidated on January 13, 1944 and its prisoners sent to Auschwitz.
https://encyclopedia.ushmm.org/content/en/article/german-administration-of-poland. https://encyclopedia.ushmm.org/content/en/article/ghettos-in-poland.
Biography
Hinda Chilewicz (now Helen Luksenburg) is the daughter of Chaim and Chana Chilewicz. The eldest of three children, Hinda was born on April 4, 1926 in Sosnowiec, Poland where her father owned a textile mill. After the German invasion the family remained in Sosnowiec, which soon became an open ghetto. During this period Hinda's brother Abraham (Mumek) was sent to a labor camp in Markstaedt. He later died in 1944 at the age of 17 while on a death march. Hinda was transported to the Goglin transit camp, and in March 1943 she was deported to the Gleiwitz labor camp. When the ghetto was liquidated in August 1943, Hinda's parents and sister, Bluma, were deported to Auschwitz. All three perished in the camp. Hinda remained in Gleiwitz for over a year and a half. There she met her future husband, Welek Luksenburg from Dabrowa.