Under American Army supervision, townspeople from Hannover are forced to watch as Nazi Party members exhume the bodies of 200 Russian officers and others shot by the SS near Wuelfel. 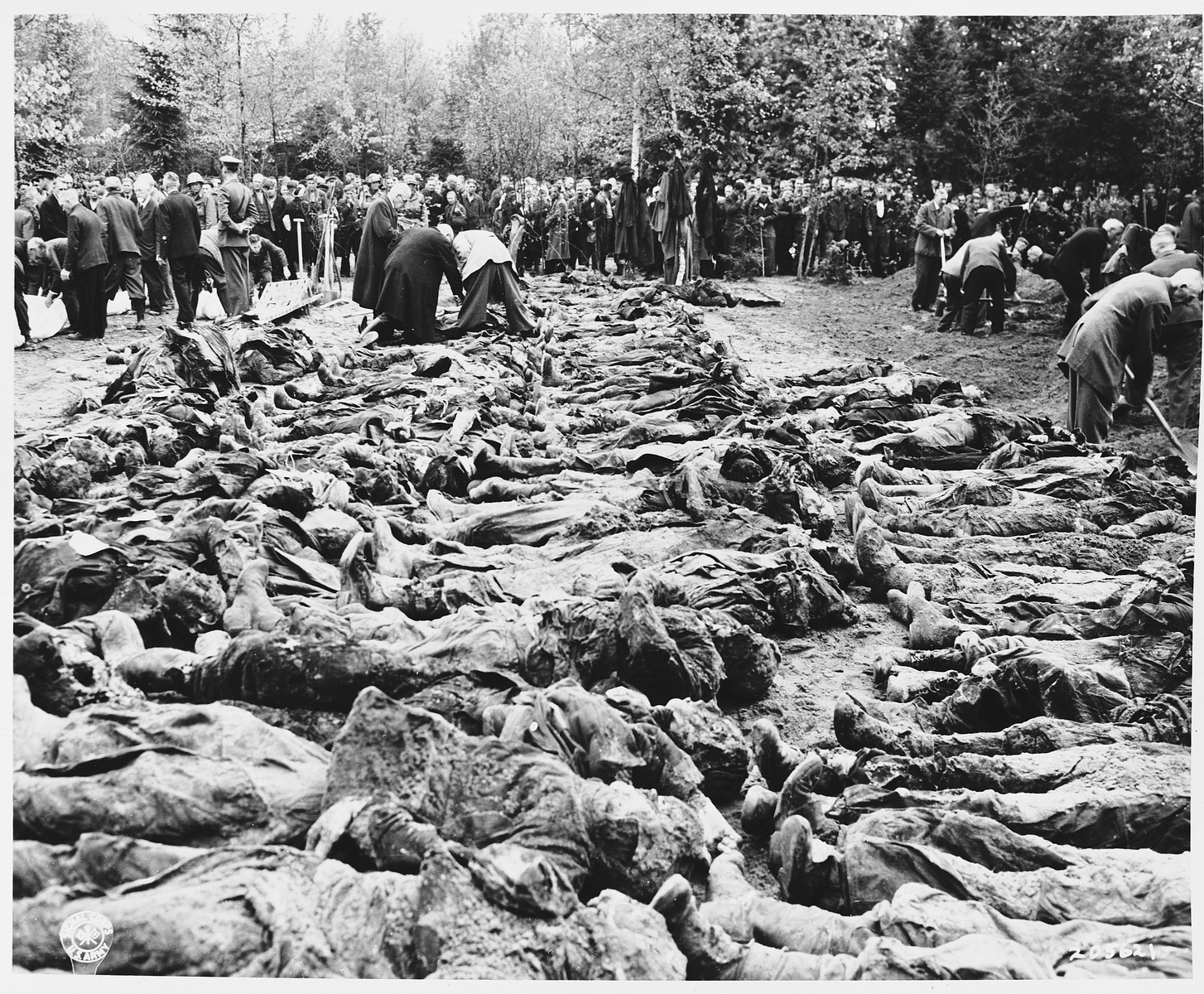 Under American Army supervision, townspeople from Hannover are forced to watch as Nazi Party members exhume the bodies of 200 Russian officers and others shot by the SS near Wuelfel.

On April 8, 1945, 200 Red Army officers and other prisoners of war were sent on a death march from the Liebenau labor camp, 50 kilometers NW of Hanover, where the prisoners worked in a munitions factory. As they reached Wuelfel, a suburb of Hanover, the SS guards ordered 25 prisoners, including one woman, to dig a large grave. While this was being done, a prisoner killed a guard with a shovel and was able to escape to the woods nearby. From there he heard the shots as the remaining prisoners were killed and buried in the grave. Several weeks later, as American troops swept through the area, the mass grave was discovered. On May 2, the 35th Division of the U.S. Ninth Army gathered townspeople from Wuelfel and forced them to exhume the grave, wrap the bodies in sheets, and rebury them near the Hanover City Hall. Before reburial, many of the victims were identified by friends and relatives remaining in the area.

The original Signal Corps photo reads,
"NAZIS MASSACRE RUSSIAN PRISONERS
April 8, 1945, Nazi SS troops shot over 200 Russian Army officers and enlisted men, prisoners-of-war at Wulfel, a suburb of Hanover, Germany. The victims were marching to Wulfel from their previous prison camp near Libenau, 50 kilometers from Hanover, as the Americans took the latter city. Twenty-five of the victims, including a woman, were forced to dig the graves before being murdered. During the proceedings one of the group killed a German guard with a shovel, escaped into the woods nearby and heard the shooting as the Germans massacred his comrades in cold blood. The bodies were put into mass graves and hastily covered with earth. When troops of the 35th Division, Ninth U.S. Army, took over the camp, German civilians and Nazi Party members of Hanover were orderd to witness and to participate in the exhuming of the bodies May 2, 1945. The Americans stood by to supervise as they dug up the victims and, with bare hands, wrapped them in clean white sheets for decent burial near Hanover City Hall. Many of the dead were recognized by friends and relatives till in the area who witnessed the ceremony.