Group portrait of girls at a church school in Wysokie Mazowieckie, Poland, who are dressed for their first communion. Among the children are twin Jewish sisters who are living in hiding. 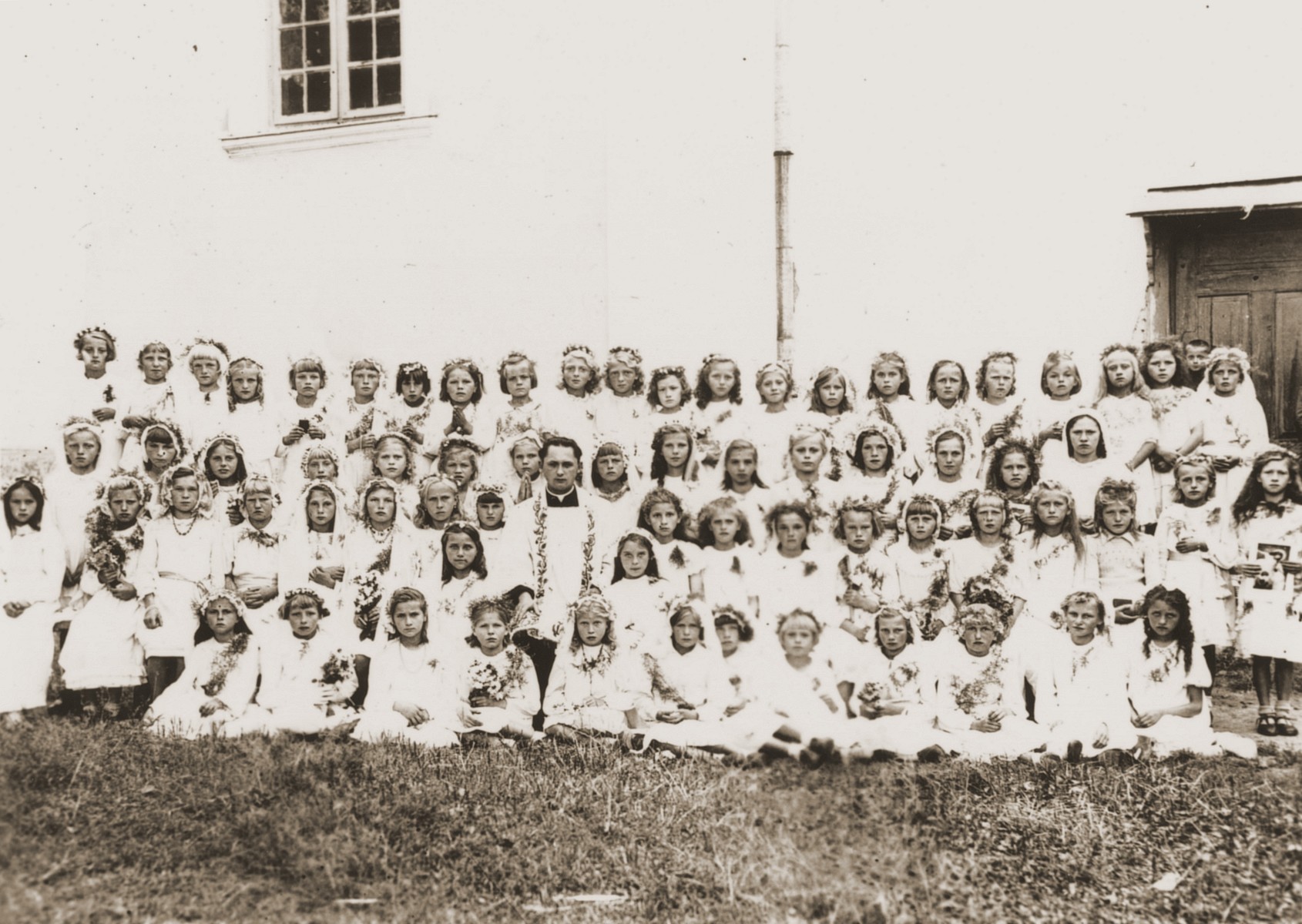 Group portrait of girls at a church school in Wysokie Mazowieckie, Poland, who are dressed for their first communion. Among the children are twin Jewish sisters who are living in hiding.

The Jewish twins, Celina and Fela Friedmann, are pictured standing in the center of the back row.

Biography
Celina Hecht and Fay Nadaner (born Celina and Fela Friedmann) are the identical twin daughters of Rudolf and Dora (Bagon) Friedmann. They were born December 3, 1933 in Warsaw, where their father owned a jewelry manufacturing company, and their mother worked as a nurse. Rudolf's family originally came from Vilna, but he was born in Munich. Dora's family came from Bialystok. After the German invasion of Poland, Rudolf fled east, along with many other Jewish males. The twins and their mother remained in Warsaw. When the bombing of the capital subsided, they fled with Rudolf's mother and Dora's two older sisters to the Bagon family in Bialystok, which had come under Soviet occupation. Soon after their arrival, they were joined by Rudolf. Rudolf and Dora then decided to send the girls to live in the countryside where they thought they would be safer. In 1941, when the Soviets ordered the deportation of Jews from eastern Poland to the Soviet interior, Dora was permitted to remain so that she could return to her daughters. Rudolf, however, was deported to Siberia. They never saw each other again. Following the German invasion of the Soviet Union, Dora retrieved her daughters and brought them back to Bialystok. Soon after, they were ordered to move into a ghetto. Dora worked as nurse in the children's hospital in the ghetto and also as maid for a German officer, so that she could get more food for the children. In early 1942, Dora learned of an impending deportation action; she sent Celina to a farm and Fela, to a friend in the city, explaining that the girls were really only half-Jewish. Subsequently, the Gestapo arrested Dora when she went to get false papers for herself. However, after explaining that her children were only half-Jewish, she was released. This episode convinced Dora that she had to find hiding places outside the ghetto as soon as possible for her two daughters. She hoped she would be able to join them in hiding soon afterwards. Dora found a widow named Jadwiga Kaczynska who was living in the village of Osipy Lepertowizna near Lomza with her two sons and sister, Lodzia. Since no one in the village knew Lodzia's husband, they pretended that the girls were Lodzia's nieces by marriage from Sopot. The twins took on the last name of Biugunska. The girls spoke Polish, went to church and received first communion. On one occasion Mrs. Kaczynska helped Fela sneak back into the ghetto to see her mother. This was the last time she saw her. Later, Mrs. Kaczynska's uncle told her he suspected the girls were Jewish and threatened her if she didn't kill them. Mrs. Kaczynska then separated the twins and sent them to work as shepherdesses for two different farmers in the vicinity, though they were only eight-years-old. She then told her uncle that she had gotten rid of the girls, but after three months she brought them back to her home. Mrs. Kaczynska also hid another Jewish couple named Pianko in her barn. After the liberation, Mrs. Kaczynska registered the girls with the Jewish community in Bialystok so that surviving relatives would know where to find them. Their mother's sister Fania found the girls and brought them to live with her. Through the Jewish Agency they later learned that Rudolf had survived and was living in Tashkent. It took another year before Rudolf and the twins were finally reunited in Munich. They immigrated as a family to the U.S. in September 1947 aboard the Ernie Pyle.