Herbert Karliner poses with his father, Joseph, on the deck of the MS St. Louis. 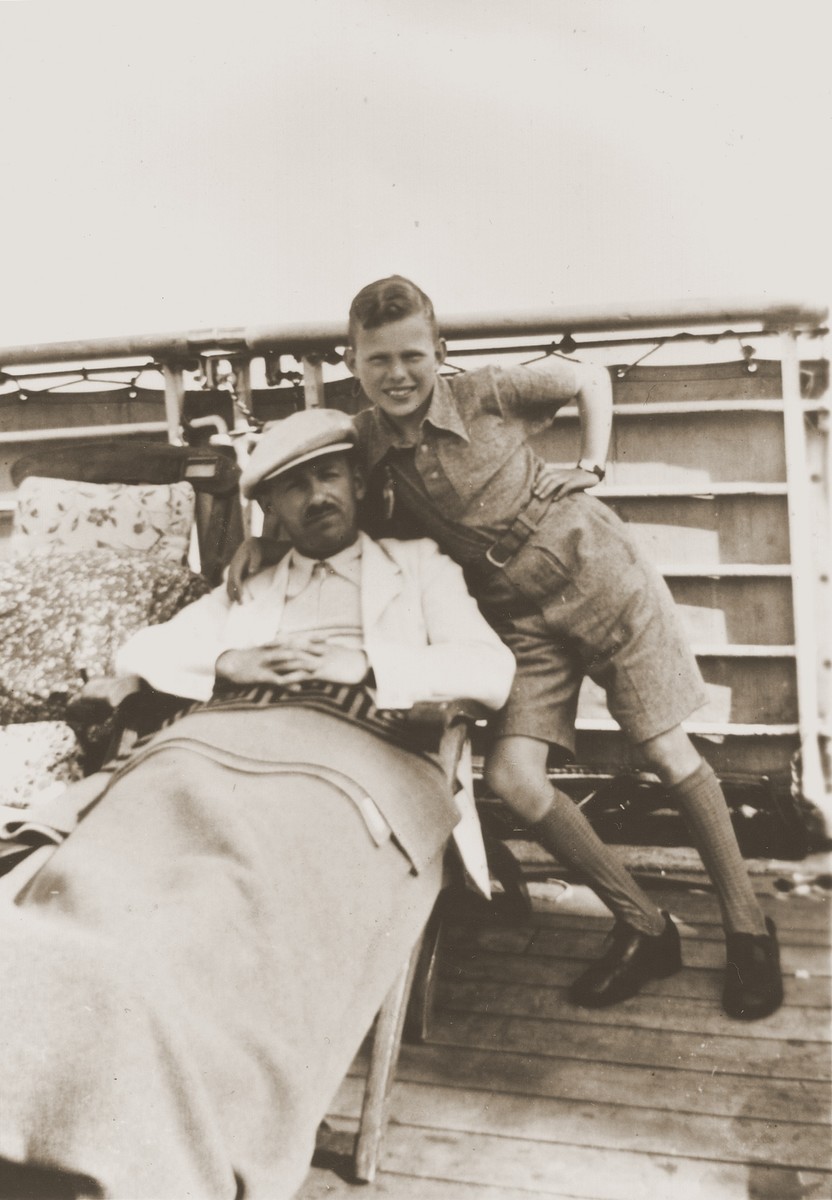 Herbert Karliner poses with his father, Joseph, on the deck of the MS St. Louis.

Event History
The St. Louis was a German luxury liner carrying more than 930 Jewish refugees from Nazi Germany to Cuba in May 1939. When the ship set sail from Hamburg on May 13, 1939, all of its refugee passengers bore legitimate landing certificates for Cuba. However, during the two-week period that the ship was en route to Havana, the landing certificates granted by the Cuban director general of immigration in lieu of regular visas, were invalidated by the pro-fascist Cuban government. When the St. Louis reached Havana on May 27 all but 28 of the Jewish refugees were denied entry. The American Jewish Joint Distribution Committee (JDC) dispatched Lawrence Berenson to Cuba to negotiate with local officials but Cuban president Federico Laredo Bru insisted that the ship leave Havana harbor. The refugees were likewise refused entry into the United States. Thus on June 6 the ship was forced to return to Europe. While en route to Antwerp several European countries were cajoled into taking in the refugees (287 to Great Britain; 214 to Belgium; 224 to France; 181 to the Netherlands). Only those who were accepted by Great Britain found relative safety. The others were soon to be subject once again to Nazi rule with the German invasion of western Europe in the spring of 1940. A fortunate few succeeded in emigrating before this became impossible. In the end, many of the St. Louis passengers who found temporary refuge in Belgium, France and the Netherlands died at the hands of the Nazis, but the majority survived the war.
Biography
Herbert Karliner is the son of Joseph and Martha (Weissler) Karliner. He was born in Peiskretscham (Silesia), Germany on September 3, 1926. Herbert had three siblings: an older sister, Ilse (b. 1923), an older brother, Walter (b. 1924), and a younger sister, Ruth (b. 1927). The family owned a grocery store, which Martha managed much of the time while Joseph was engaged in the horse trade. On Kristallnacht the store was destroyed and Joseph was sent to Buchenwald. He was released two months later after Martha secured a visa for him to travel to Shanghai. Since the visa was for Joseph alone, the family sought other means to emigrate. The Karliners booked passage on the MS St. Louis to Cuba. When the ship was forced to return to Europe in June 1939, the Karliners were given refuge in France. Walter and his two younger siblings, Herbert and Ruth, were placed in an OSE children's home near Paris called the Villa Helvetia, where they remained until September. After the outbreak of the world war, the children were removed to the Chaumont home in Creuse. There, Walter worked for a cabinet maker and Herbert, for a baker. Ruth returned to her parents and older sister in Mirebeau. In 1941 Walter moved from Chaumont to Montintin, another OSE home, where he would be able to study cabinetry. On August 26, 1942, French gendarmes conducted a raid on Chaumont and arrested all children over the age of sixteen including Herbert. He was released after proving that he was in fact, a week shy of his sixteenth birthday. However rather than return to the home, the OSE transferred him to the Masgelier children's home where he remained for the next half year. In February 1943, fearing an anticipated raid, Herbert and a friend, Julien Bluchstein, fled south. They hoped to meet up with Walter but he was no longer in Montintin, so the two continued south towards the Spanish border. However when they neared the border, members of the underground told them they could no longer safely cross and directed them to go to Lyon and await directions how to cross into Switzerland. From Lyon they went to Annemasse and learned that it was impossible to cross into Switzerland. Instead they went to a farm in Tayulers run by religious Zionist members of the Eclaireurs Israelites. Since the farm already had too many refugees, the boys were then sent to Treves where they lived in safely until their liberation in 1944. After liberation, Herbert lived in a number of OSE homes including Masgelier, Poulouzat and Rue Rollin. Walter spent the last two years of the war in many settings, including a mental asylum in Narbonne and a farm in Castelsarrasin. In 1943 or 1944 the Eclaireurs Israelites de France underground sent Walter to Saint Junien [Haute Vienne] to live at a home for boys run by the Vichy paramilitary youth movement, Moissons Nouvelles. After the liberation Herbert and Walter reunited in Paris. They were the only survivors of their family. Their mother and sisters had been deported to Auschwitz via Drancy in October 1942; their father met a similar fate a year later. The brothers went to live at the Hotel du Moulin, a home for boys run by the Eclaireurs Israelites in Moissac, where Walter worked as an instructor in cabinetry. In December 1946 the two brothers immigrated to the United States.